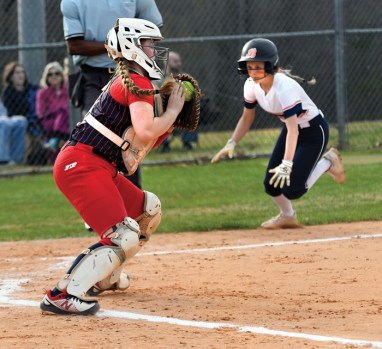 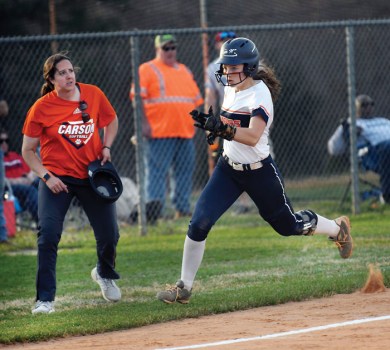 Carson’s Abbey Nixon heads for home after hitting an inside the park homer. Coach Charissa Duncan is watching for the ball. photo by Wayne Hinshaw, for the Salisbury Pos 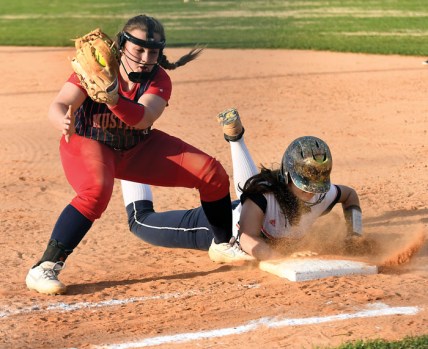 Carson’s Makayla Johnson 2 dives back to first base with East’s Kori Miller 8 covering. photo by Wayne Hinshaw, for the Salisbury Post 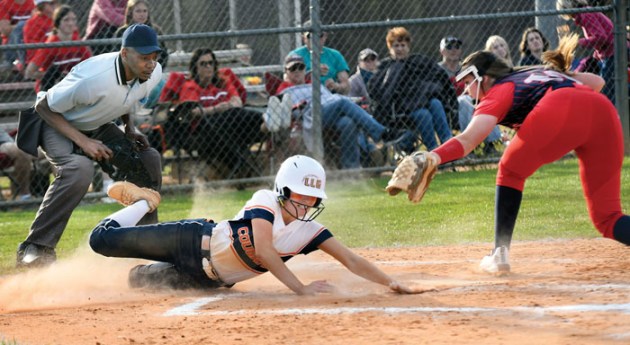 “It was a tough game,” Carson head coach Charissa Duncan said. “East has a lot of fight, and I never felt comfortable until we got the last out.”

Lonna Addison pitched most of the game for the Cougars. Phoebe Cole relieved and got some key outs.

Cole and Allie Burns had run-scoring singles in the first for the Cougars (3-4, 3-0) against East’s freshman pitcher Eleni Miller.

East pulled off a double steal for a run in the top of the second.

Carson went up 5-1 in the bottom of the inning. Landry Stewart had a two-run double and stole home for another run.

Abbey Nixon hit an inside-the-park homer down the right-field line in the fourth to boost the Cougars’ lead to 6-1.

Stewart’s RBI single in the fifth made it 7-1.

Kori Miller started the sixth with a hit for East (4-3, 1-2) and scored on Myah Sifford’s extra-base hit. Cole relieved Addison and got three outs to end the inning.

Maddie Roberts hit a two-run homer in the seventh for the Mustangs.

“East has a great group of young players and it was an intense game, but our experience made the difference,” Duncan said.

Stewart had three hits for Carson. Burns, Addison and Holly Stowe had two each.

West (4-2, 2-1) was held to three hits. Emma Clarke had a double and a triple and knocked in the Falcons’ run.

Katie Peeler and Rachel McCullough had triples for the Hornets (0-7, 0-1).

Kacie Gordon had a triple and a double for the Wildcats.

THOMASVILLE — Chloee Stoner had two hits, including a homer, for North Rowan in a 9-5 Central Carolina Conference loss to East Davidson on Tuesday.

Lindsay Wolford had three doubles and eight RBIs. Kaylyn Belfield was 3-for-3 with a homer.

UNC signee Cameron Padgett struck out 18 for the Mustangs (8-0, 3-0), with no walks, while scattering five hits.

Chance Mako drove in two and Austin Fulk had an RBI in East’s three-run seventh.

CHINA GROVE — Carson rallied for two runs in the bottom of the seventh for a 2-1 SPC win against Northwest Cabarrus on Tuesday.

Northwest Cabarrus had 10 hits but could only push across one run against Carson starter Mikey Beasley, who made it into the fifth inning.

Emory Taylor had the game-deciding double in the seventh for the Cougars (6-2, 3-0) after Jacob Efird got the tying run home.

LANDIS — South Rowan got another dominating pitching outing from Wake Forest commit Haiden Leffew and breezed to a 10-0 SPC win in five innings against Concord on Tuesday.

Leffew struck out 10 in four innings, while allowing one walk and one hit. Colton Fisher finished the shutout.

Ty Hubbard and Carson Crainshaw went  3-for-3 with two RBIs for the Raiders (6-1, 3-0). Jacob Ritchie had two hits and two RBIs. Coleman Overcash had two hits.

HUNTERSVILLE — West Rowan scored four runs in the first inning and went to beat Lake Norman Charter 9-4 in an SPC game on Tuesday.

Gouge struck out nine in six innings for the win. He walked one and didn’t allow an earned run.

Clay Hunt went 4-for-4 for the Green Dragons.

Bayden Hazlip pitched a complete game for the War Eagles.

West Rowan won 16-0 against Southeast in three innings on Tuesday.
Maddox Moore and Brody Pople had three hits each for the Bulldogs.
Luke Ponczka was the winning pitcher.
West plays Knox on Monday.

Brittany Vanhoose and Lauren Corriher assisted. Kristin Hammonds made 12 saves in the Falcons’ first SPC victory of the season.

South lost close matches at 4 (Grayson Steedley) and 5 (Cameron King) and at 2 and 3 doubles.

Salisbury (4-0, 4-0) stayed undefeated on Tuesday by rolling 9-0 against Thomasville in a Central Carolina Conference match.

Will Koontz has returned to action for the Hornets following an illness.

Koontz won at No. 1 singles, and the Hornets also got victories from Colin Donaldson, Gray Davis, Reid Hlavacek, Kevin Williams and Wyatt Goodnight.