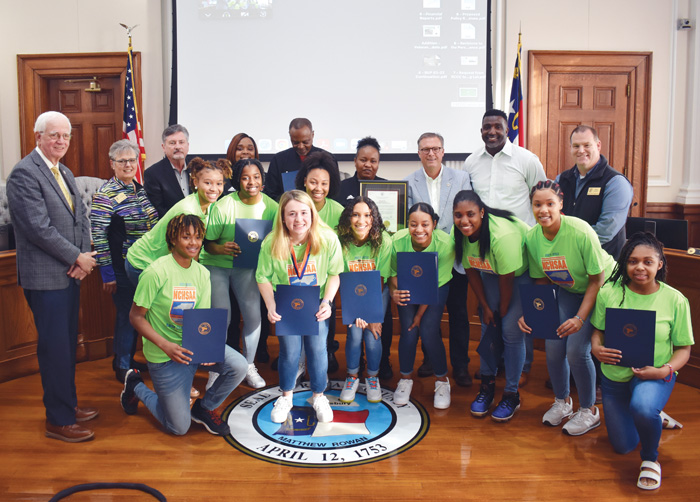 The Rowan County Board of Commissioners recognized the Salisbury High School Hornets girls basketball team for winning the 2A state championship. The Hornets defeated Farmville Central 54-44 in Chapel Hill on March 12 to claim the title, finishing their season with just a single loss on their record. Ben Stansell/Salisbury Post

SALISBURY — Commissioners on Monday night approved a permit to allow the construction of an event center near Rockwell, but not before they tagged on several conditions to address concerns voiced by neighbors.

The board granted a special use permit to Deborah Wright to accommodate a 2,400-square-foot event center on her 10-acre property at 3405 Organ Church Road.

Wright brought her original proposal before commissioners last month and was met with pushback from neighbors, who expressed anxieties about the event center making too much noise, generating traffic and leading to inebriated individuals wandering onto their property. The most prevalent concern was the use of Doublethumb Road as the entrance to the event center, not Organ Church. Doublethumb Road is a privately maintained gravel road that connects about 14 residences to Organ Church Road.

Commissioners tabled the public hearing during that meeting to give Wright time to amend her proposal to meet those worries.

In the new site plan approved by commissioners, Wright moved the entrance to the event center to Organ Church Road. A gated entrance will be located on Doublethumb Road, but will only be used for first responder access in case of an emergency. Six rental cabins included in the initial site plan were also nixed. A bridal suite, however, was included in the final plan.

“I do think we were able to address at least most of the concerns that came up in the prior meeting,” Wright said during Monday’s meeting.

Despite Wright’s adjustments, several of the same neighbors and a few new neighbors still spoke against the event center. One neighbor said the center would be the “beginning of the end” because it would lead to more development in the area. Another said she did not want to lose her peace and security because of the event center.

After hearing those concerns, commissioners tacked on three conditions before approving the permit: the event center cannot operate past 10 p.m. Monday through Saturday; Wright must install fencing along Doublethumb Road to prevent cars from using the road to enter and exit and to stop people from wandering off their property; the event center can only operate from 12-6 p.m. on Sunday.

Commissioners considered completely prohibiting Sunday operations, with Commissioner Mike Caskey and Chair Greg Edds saying they would like to stop operations for one whole day to give the community a break. Commissioner Judy Klusman advocated for restricted hours on Sunday. Edds and Caskey agreed to those hours after Wright said she would not to host weddings or play live music on Sunday, only host small gatherings.

Commissioner Craig Pierce said neighbors should report any noise heard after 10 p.m. or on Sundays to the Rowan County Sheriff’s Office. If Wright is found to be in violation of the noise condition, commissioners have the ability to rescind the special use permit.

“I’d like to emphasize the fact that we are going to pay attention to the noise that’s generated,” Pierce said.

Wright agreed to each of those stipulations prior to the approval. Wright also said she plans on insulating the event center, facing the speakers or live music away from her neighbors and creating a berm with vegetative buffering to block noise from leaving her property.

At the beginning of the meeting, commissioners recognized the Salisbury High School varsity girls basketball team for winning the 2A state championship earlier this month. After applauding the team several times, commissioners presented the players, coaches and Salisbury High principal with copies of a proclamation.

“When you leave home and represent us out across North Carolina, everybody’s watching, we’re watching to see how you do athletically but also how you represent us as representatives of Rowan County,” Edds said. “And everything we’ve heard we’re just as proud of how you represented us on the court as you did in the final scores. We’re super proud of you.”

Klusman commended the team on the championship and encouraged the players to continue to be good role models for young girls in the community.