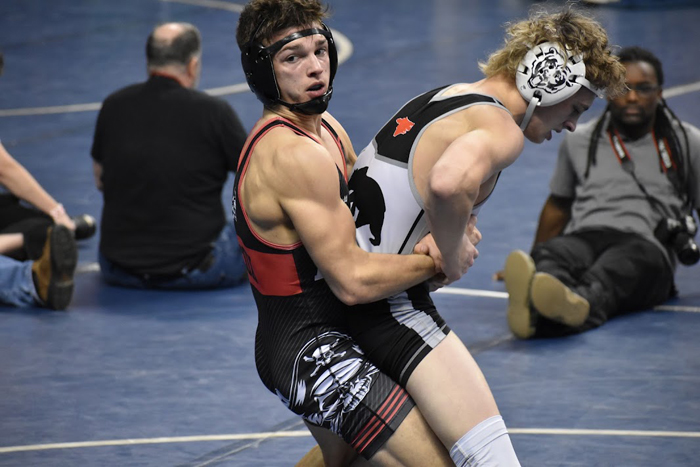 CHINA GROVE — Skeptics told South Rowan wrestling coach John Kincaid there was no way Jacob Cox would dominate the mat in 3A, as he had done for years in 2A.

Kincaid tried hard not to laugh out loud.

“The people who said that didn’t know what Jacob is all about,” Kincaid said. “They don’t understand the dedication he has, the discipline he has, the understanding of wrestling concepts that he has. He could coach our team. He could run our practices and break everything down like a coach. And no one will ever outwork Jacob. I knew he’d run right through 3A or 4A or 5A — or whatever. It wasn’t going to matter. But it was helpful motivation. I was able to tell him, ‘Hey, Jacob, they say you can’t win 3A.'”

Cox, the Post’s Rowan County Wrestler of the Year, ran through 3A.

“The only thing that changed with 3A were the schools we wrestled against,” Cox said. “Different schools, but the same grind got the same results. I’ve got a lot of drive, but I wasn’t trying to prove anything — other than to myself. People have big expectations for me, but no will ever expect more from me than I expect from myself. I am confident in my abilities and confident in my preparation. I’ve been wrestling against some of the best kids in the country for a long time, so I never went into a match not expecting to win it. I knew I could score points and I knew I could stop my opponent from scoring points.”

While the wins never stopped piling up for the level-headed, laser-focused Cox, there were some moments of relief for the wrestler, his family and his coaches when he ruled his final high school match for the 138-pound 3A state championship.

Wrestling is a sport where anything less than perfection can get you in trouble in a hurry. Cox was rolling along undefeated his freshman year when he made a mistake in a 2A state semifinal at 113 pounds. He lost that match to three-time state finalist Elijah Boyd. Cox bounced back to win the bout for third place, but he never forgot that setback. He would never lose again in the state tournament.

Cox’s 13-4 major decision in his swan song made him Rowan County’s first three-time state champion. He won his last 82 high school matches and finished a remarkable, lights-out career with a 142-4 record. He cemented his place in history, not just as one of the county’s greatest wrestlers, but as one of the county’s most decorated athletes.

“I teared up and Jacob teared up some after that championship match because we both realized it was the end of a great run,” Kincaid said. “We’ve got a three-time state champ now, so the goal will be for South Rowan to produce a four-timer, but I don’t know that we’ll ever see another Jacob Cox.”

Kincaid goes back a long way with Cox. He and Jacob’s father, Adam, were friends and coached together.

“I can remember Jacob wrestling when he was so small we had to duct-tape his singlet so it would stay on him,” Kincaid said.

He wrestled at N.C. State. He got Jacob started in the sport early.

“Some of my first memories are of  being in the wrestling room at South Rowan when I was still in kindergarten,” Cox said. “I’ve been wrestling 12, maybe 13 years now. It’s a very difficult sport, but it’s the sport that I love. It’s a sport that has been my entire life.”

Well, not quite all of his life. Cox is equally outstanding in the classroom.

“I set high goals in academics as well as in wrestling,” Cox said. “Goals for the year and goals for the career. My belief is if you’re not reaching your goals, you need to work harder. That’s what I did after I finished third in the state my freshman year. I worked harder. I see people taking time off and I see people who just want to have fun and I don’t really understand that. Fun is what you do after you finish the job.”

If you’re wondering who in the world beat Cox during his career, his other three losses came at the hands of two high school legends.

The fourth and final loss for Cox in high school came on Jan. 11, 2020. In the Boneyard Bash in Fayetteville, he dropped a 6-2 decision to Richard Treanor, a three-time state champion from Hough who is now wrestling at West Point.

Cox learned from all of his rare defeats. He considers Montaperto and Treanor among his best friends, as well as primary motivators. Each loss drove him to sweat more, to lift more, to push more.

“He practiced five days a week for South Rowan, but he also practiced three of four days a week with his club team (Charlotte’s Darkhorse Wrestling),” Kincaid said. “And he got up and worked out and lifted weights seven days a week. He doesn’t let up for a minute.”

Cox was astoundingly strong for a 113-pound sophomore and became a dominating 2A state champ in 2020. That’s where the dream of being Rowan’s first three-timer really started.

“I had to win the first one before I could think about getting a second one,” Cox said.

Cox was growing naturally and he’d also fallen in love with the weight room, so his 113-pound days were soon in the rear-view mirror.

Cox climbed all the way up to the 138-pound class as a junior, a weight class where he could eat pretty normally. There was a fierce match in the final, but he won a 5-4 decision for his second state title.

Sticking at 138, but moving up in class to 3A for his senior year, he got the job done one more time to make history.

“It doesn’t happen without great coaching and a great support group of family and friends,” Cox said. “From the start of my career, I’ve had those things.”

Besides the state title, Cox logged his fourth straight regional championship this year.

He benefited from having a talented training partner in Logan Durham, a South assistant coach and a two-time state champ.

“Logan was an assistant, but he was like a teammate,” Cox said. “It was great having him to drill with and I could also bounce ideas off him.”

Cox was co-wrestler of the year for the South Piedmont Conference, along with Central Cabarrus’ Jackson Baglio, his Darkhorse teammate.

Cox won just about everything in sight except the Most Outstanding Wrestler award at the Rowan County Championships.

“They said Jacob didn’t have a lot of competition,” Kincaid said with a chuckle. “But it’s not like that’s his fault. How many guys can compete with him?”

There’s plenty of competition coming up for Cox, who is still working out with serious purpose as he prepares for the 33rd High School Nationals that will be held in Virginia Beach, Va., March 25-27.

“My foot is still on the gas,” Cox said. “I’m still trying to get faster and stronger every day.”

Cox will compete with many of the nation’s best for two days and up to eight matches and will do so at 132 pounds. His goal will be All-America status.

“The best of the best from everywhere will be there,” Kincaid said.  There’s a fire in Jacob to do well.”

The million-dollar question for Cox is what’s ahead for the fall.

Will he wrestle in college or does he close the book on that chapter of his life?

Cox would like to continue to maul people on the mat,  but wrestling will have to be something that fits into his academic plan.

He plans on an engineering career, so N.C. State is one option. He’s visited there.

“I’d love for him to wrestle, but he could go anywhere in the country just on his academics,” Kincaid said. “He’s not just a wrestler, he’s a great person. He’s always brightened up any room he’s walked into.”

Jaden Gaither, a state champion heavyweight, was a Cinderella story. He won the 285-pound weight class while weighing in at 215, coming out of nowhere after not winning the county, the conference or the regional.

Determined by the Rowan County Championships