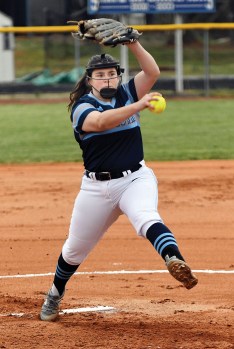 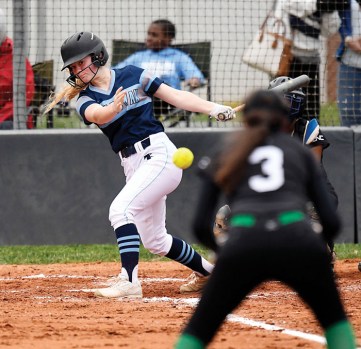 West’s Arabelle Shulenberger hit a game-tying homer in the top of the seventh against Central Cabarrus but it was not enough. File photo by Wayne Hinshaw, for the Salisbury Post 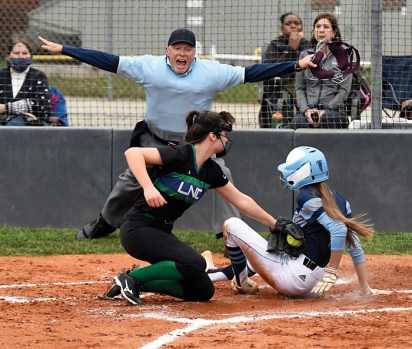 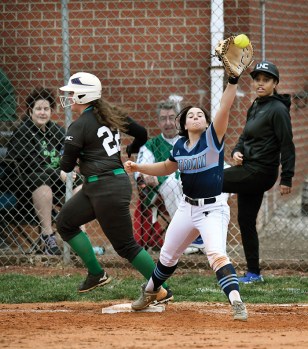 Lake Norman's Maria Wilson 22 was safe at first as West's Brooke Kennerly 12 reaches for the throw.., photo by Wayne Hinshaw, for the Salisbury Post 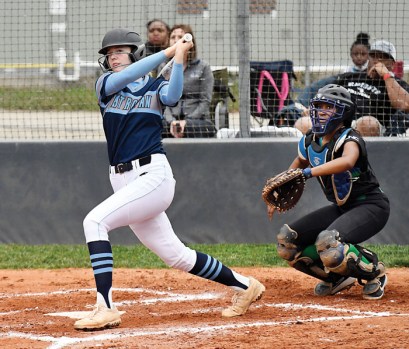 Freeze struck out seven and walked one in a 12-0 South Piedmont Conference victory against Lake Norman Charter.

Kenadi Sproul went 2-for-2 and scored three runs at the top of the lineup.

Lake Norman Charter was able to keep slugger Emma Clarke in the ballpark, but she had a triple and two RBIs.

Abbey Nixon had two hits and scored three. Landry Stewart had a triple and scored twice for the Cougars (2-4, 2-0).

South Rowan had no trouble with Concord and wiped out the Spiders 15-0 in three innings.

Lexie Ritchie and Avery Crowell combined on the SPC shutout for the Raiders (5-3, 1-1).

A sixth-inning rally by the Mustangs fell short in a 6-4 non-conference loss to Alexander Central, always one of the best in 3.

East was blanked by SPC foe Central Cabarrus 5-0 on Friday.

Mako (2-0) allowed one hit, struck out nine and walked two in six innings.

Griffin Warden went 3-for-3 for the Mustangs (7-0, 2-0) in the South Piedmont Conference contest. Cobb Hightower, Aiden Schenck and Austin Fulk had two hits each.

Hightower, a sophomore shortstop, committed to UNC this week.

Carson kept pace with East Rowan and South Rowan in the SPC by beating Concord 7-1.

Garrison Collins and Will Bradshaw drove in two each.

Luke Graham had two hits for West. Matthew Connolly and Noah Loeblein had the other hits. Loeblein produced the RBI.

South Rowan took its first loss in a 2-1 setback at Socastee, S.C., on Saturday.

Haiden Leffew had three hits for the Raiders (5-1) and drove in the run.

The Raiders played without Kane Kepley.

Josh Vinson, former South AD, is the AD at Socastee, in Myrtle Beach.

In the Central Carolina Conference, West Davidson has won the first two matches, with Salisbury second in both. Will Webb’s 37 paced the Hornets this week.

West Rowan was the top Rowan team, taking third. Justin Cole and Charlie Young shot 41s for the balanced Falcons, who finished at 168.

East Rowan’s Landon Merrell was the top Rowan individual with a 35. The Mustangs placed fifth.

Medalist with a 34 was NWC’s Cooper Burris.