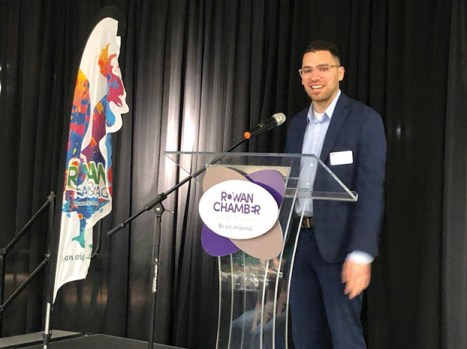 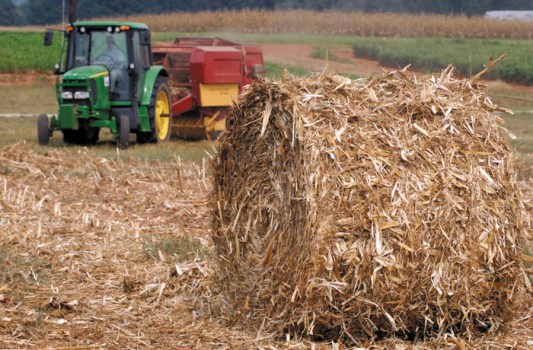 Farmers who are filling huge tanks just to fuel their tractors are suffering from the high prices at the pump as much as anyone. File photo by Jon C. Lakey, Salisbury Post.

SALISBURY — Americans are feeling the pain at the pump, but the burden of high gas prices is also weighing on farmers.

“If you’re facing those increases just when you fill up your small car, your small truck, imagine what that’s doing to farmers who are filling thousand-gallon tanks just to fuel their tractor,” said Danny Munch, associate economist with the American Farm Bureau Federation.

High fuel costs are one of the many pressures pushing down on farmers in Rowan County and across the country. Munch highlighted those hurdles during his presentation at the Rowan Chamber’s Power in Partnership breakfast on Thursday morning while also offering a few positive notes. Salute to Agri-business was the theme of the event, which drew about 200 people to West End Plaza.

The American Farm Bureau Federation is among the largest general farm organizations in the United States, representing the interests of farmers through advocacy and education. As a member of the organization’s economics team, Munch analyzes how legislation will impact farmers and informs farmers about trends that will impact their bottom line.

While cash receipts from crops and livestock sales are projected to reach a record $461.9 billion in 2022, Munch said net farm income this year is expected to be down by about 4.5% from $119 billion to $114 billion. The key reason for a lower bottom line is production expenses — the cost of fuel, equipment, fertilizer and other inputs needed to bring a crop to harvest. Munch said those expenses are set to increase by $20 billion, or 5%, across the industry.

While Munch is hopeful that farmers “beat those numbers,” input costs could continue to go up as Russia and Ukraine continue to fight.

“Obviously first and foremost this is a humanitarian crisis, people are losing their lives over this, but this is also a major disruptor to our ag markets,” Munch said.

Europe’s reliance on Russia for natural gas could contribute to rising fertilizer costs.

“Natural gas is used as a basis to produce a lot of our nitrogen-based fertilizers, which is one of the reasons we have seen such a large uptick in fertilizer prices across the board, depressing our margins back here,” Munch said.

Munch said the war also could affect the type and quantity of crops being grown in Russia, Ukraine and Belarus, which would in turn have an impact on the world market.

Munch said farmers in America could also feel the squeeze if the quantity of agricultural products being exported to China decreases. China purchased several billion dollars less than it agreed to in both 2020 and 2021. And with no agreement in place between the U.S. and China for the country to continue buying from America at a certain rate, Munch said China’s place as a key market for U.S. agricultural goods could be in jeopardy.

“If China doesn’t buy at these same rates, what does that mean for our prices? They have pushed our soy markets for the past few years,” Munch said.

Moving agricultural products across the country and overseas has already been a problem due to a shortage of truck drivers, increased rail rates and container logjams at ports, Munch said. It’s also become significantly more expensive. There was an almost 100% increase in the cost to move containers over the Pacific Ocean from Los Angeles to China between early 2020 and the end of 2021, Munch said.

All of these factors are important to monitor, Munch said, because agriculture is the “foundation to the economy.”

In 2020, Rowan County produced over $81 million in total direct agriculture sales, including over $33 million in livestock and poultry product sales and more than $48 million in crop and produce sales. There were 925 farms in the county comprising 118,914 acres of land. Of the county’s 1,482 producers, nearly a third were new and beginning in 2020.

North Carolina as a whole produced $10.1 billion in agricultural receipts in 2020, ranking 10th in the country. In the same year, agriculture added $92 billion in value to the state’s economy and accounted for 728,000 jobs.

While there are plenty of reasons for farmers to be concerned, Munch said cause for optimism can be found in the fact that American farmers are producing more food with less inputs.

Another silver lining is that the American Farm Bureau Federation is projecting cash receipts for animal products such as chickens and dairy to increase in 2022.

Michelle Patterson of Patterson Farm said the best way to support farmers is by buying local. Many Rowan County producers operate farm stores or sell their products at nearby farmers markets. Others have online shops or community supported agriculture programs that allow customers to pay for fresh produce throughout the harvest season.

Patterson also said people can support farmers by downloading the Visit North Carolina Farms app to find out when farmers have produce available and can keep up with agricultural tourism events.

Rowan County’s agricultural community will be on display during the fourth annual Rowan Arts and Ag Farm Tour on Saturday, June 4 from 10 a.m. to 4 p.m. The self-guided tour of 10 farms, businesses and school gardens will also feature artists demonstrating their skills and showing off their work.

This year’s tour will focus on the China Grove community, with stops at Goodman Farm Supply and L.L. Goodnight & Sons & Goodnight’s Greenhouse. New in 2022 are photo ops and food trucks along the way. More information is online at artsandagtour.com or by emailing info@artsandagtour.com.