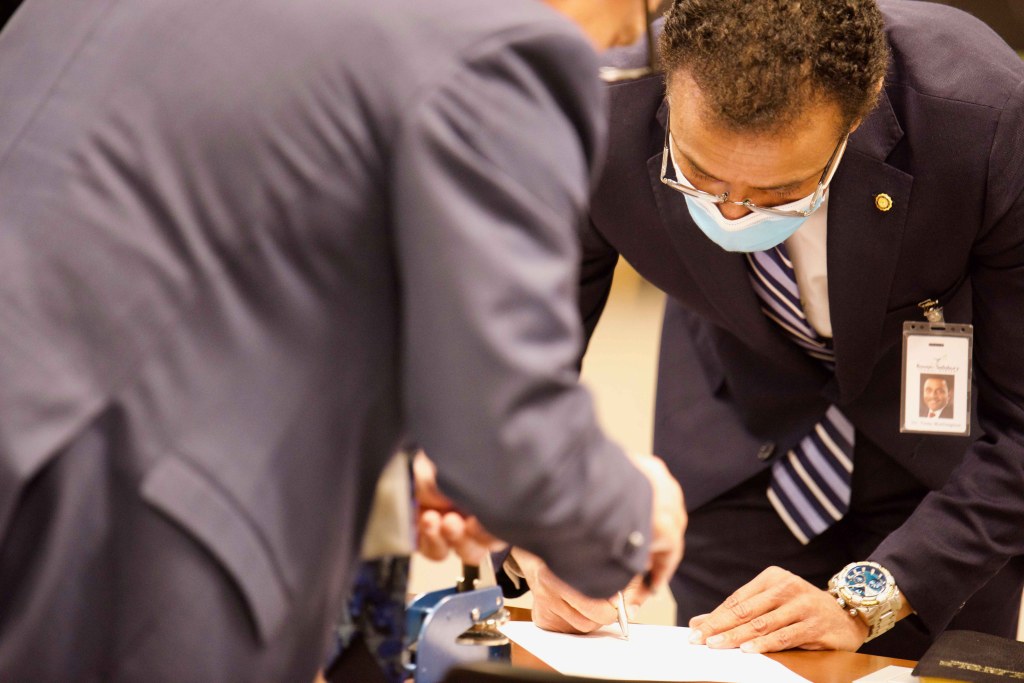 The RSS administrator was sworn in as superintendent at Wallace Educational Forum in Salisbury on Jan. 11, 2021, and is now one of three finalists for the same job in the School District of Philadelphia.

If selected, he would move from serving a district of about 18,000 students to a district of 200,000. The Philadelphia district is the eighth-largest in the country and serves a population of 52% Black students, 22% Hispanic students, 13% white, 7% Asian and 5% of other ethnicities.

The day started at 9:30 a.m with a roundtable discussion with parents and guardians, followed by a discussion with students and a final talk with teachers and principals. The day ended with Watlington at the center of a community town hall taking submitted questions and a “lightning round.”

Some of his talking points would be familiar to people in Rowan County. He talked about his laser focus on “specific, measurable goals,” being data-driven, good stewardship of tax money, not hiding problems and abandoning the “kill and drill” method of teaching.

He started to pick up on some Philadelphia lingo as well, like calling the district headquarters simply “440” in reference to its 440 North Broad Street address.

He faced questions about how he would adapt to making such a large jump in student population. Watlington said good teaching and learning is just that, and it doesn’t necessarily have to look different in a district of 200,000 students versus a district of 18,000. He said the approach is the same but the key is to understand that students may have unique challenges outside of school that are different.

“What parents want to know at the end of the day is, ‘When I send my child to school they are going to be cared for, loved and get an excellent education,’ ” Watlington said during the town hall session.

He also said it would be a mistake to think someone who worked in a district of 200,000 could not do a good job in a smaller district.

A parent asked why they should trust Watlington to solve complex operation problems like when some district schools closed due to asbestos abatement and has problems with busing and food service.

“I admit straight up, I am not from Philadelphia,” Watlington said, adding he is a quick study and interested in learning.

Watlington would also have to work with local unions as opposed to North Carolina where unions are few and far between. He was questioned about whether he could worth with unions and he said he does not view them as a bad thing.

He said one priority is to recruit and attract more Black males to teach because students need to see people who represent them. He noted typically out-of-school suspension rates divided by racial groups are highest among Black male students. He said schools have to figure out a way to disrupt those patterns.

He also said Black and brown children and their ancestors experienced slavery, segregation and Jim Crow legislation for 87% of the history of the United States, and closing gaps between student groups requires more financial investment.

Throughout the day, Watlington talked about where he came from. He was a student who took free or reduced lunches through his time in public schools in North Carolina. He said one of the greatest investments of his mother was to purchase an encyclopedia set he read cover to cover.

He started his career in education as a bus driver and custodian, graduated from college, taught and worked his way up through administration.

Some of the questions were about him personally. He talked about running, learning guitar and told the town hall crowd he is currently reading a biography of former president Lyndon Johnson. He described his work as a calling.

The two other candidates for the job went through similar day-long grilling sessions on Monday and Tuesday. The district’s timeline to hire a superintendent places public forums with the candidates in March with plans to announce the new hire this spring and have the candidate start in August.