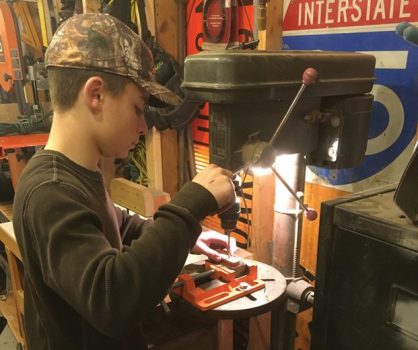 Tucker Crowell makes his blades in his family's shop, without a forge or many of the high-end tools used by most metalsmiths. Photo submitted. 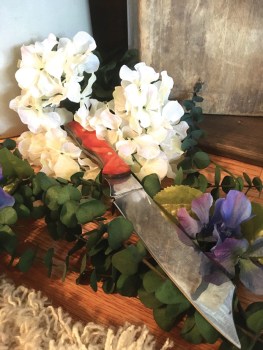 One of the knives Tucker Crowell crafted. Photo submitted. 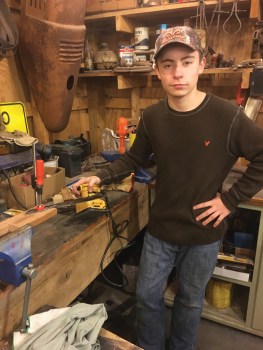 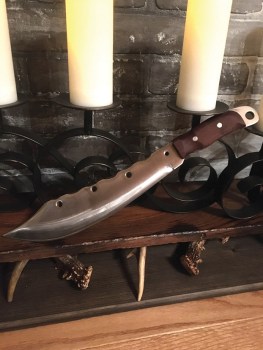 Tucker Crowell has sharpened his blade-making skills over the last three years. All of his knives, swords and axes are functional. Photo submitted.

SALISBURY — The first blade that caught Tucker Crowell’s eye was the big Bowie knife wielded by John Wayne in the 1960 classic “The Alamo.”

Only 10 years old at the time, Tucker asked his father, David, to help him make a Bowie knife of his own.

“I’ve been making knives and swords ever since,” Tucker said.

The 13-year-old metalsmith is competing in an online contest called DIY Hero, which highlights artisans across the country who are competing for $25,000 and a feature article in Make magazine. Tucker’s mother, Christine Motley-Crowell, signed him up for the contest after seeing an announcement on Facebook.

Tucker, a student at Erwin Middle School, has branched out to other weaponry since crafting his first knife. His creative process starts when he sees something that inspires him.

“I love to take ideas from books, movies, and video games and make a real version of that weapon or prop,” Tucker wrote in his DIY Hero candidate profile.

Tucker has made both a replica tomahawk ax based on the weapon carried by Mel Gibson in “The Patriot” and a sword from “The Hobbit” franchise.

Once he’s chosen a weapon to recreate, Tucker sketches out a design and lists the details of the project. He doesn’t have a forge or the same high-end equipment utilized by professional blacksmiths. Instead, he has his own workspace in a shop on his family’s farm. He borrows tools from his father and uses others gifted to him for Christmas or birthdays to turn metal into magic.

“He’s doing it all with just a torch burner, some regular tools, a grinder and some good hard work,” Motley-Crowell said.

The blade-making process can take as little as four days for a simple knife or more than a week for more complex projects.

Tucker has sharpened his knife-making skills over the last three years. The toughest technique to master has been heat treating the blades to make sure they can withstand impact, wear, use and sharpening. It also helps prevent corrosion in the metal. To bring the metal to a high temperature, Tucker uses a handheld torch or builds a fire of his own outside of the shop.

“When I first started making knives, I really didn’t know how to heat treat them properly, over time and through trial and error, I’ve learned how I need to do it using just my propane torch or under hot coals in our fire pit,” Tucker said.

Tucker crafts the handles for his blades using quality woods like Padauk or Purple Heart or an acrylic epoxy.

Tucker’s knives and swords aren’t just for show. All of the weapons he creates are functional too. He tests their sharpness out on unsuspecting water jugs or pieces of wood, depending on what type of blade it is.

Tucker has completed about 65 swords, knives and tomahawks combined.

Anyone can vote for Tucker in the competition by visiting diyhero.org/2022/tucker-crowell. A Facebook or Instagram account is needed. A person can vote once daily for free. People can also purchase votes with proceeds going to the American Lung Foundation. The first round of the competition will end on March 24 and there will be several more phases after that. The general public will cast their final votes between April 29 and May 5, with a winner determined at close of voting on May 5.

If he wins, Tucker knows what he’d do with the prize money.

“If I were to win the $25,000, I’d use it toward the purchase of some of the higher-end tools like a band saw or lathe that I don’t have now, and possibly to put a forge together,” Tucker said. “But the majority of the money would go towards college where I’d like to get a mechanical engineering degree.”