High school boys swimming: Sever took it to another level 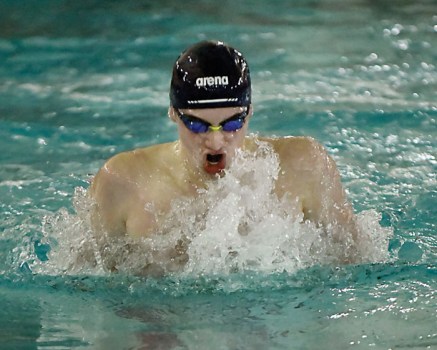 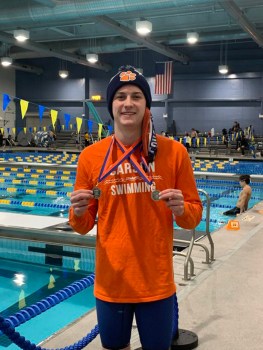 Submitted photo — Cooper Sever earned silver at the 3A state level in the 100 breaststroke.

CHINA GROVE — Carson’s Cooper Sever has devoted his life to the sport of swimming, and he made those difficult final laps from being really good to being truly great as a senior.

“He’s a kid who already had accomplished so much,” Carson head coach Wesley Parrish said. “It’s not easy to improve when you’ve been as good as he’s been, but he continues to push himself to get even better. Not a lot of people can do that.”

Sever (it rhymes with never, not beaver) was an easy choice for his third Rowan County Swimmer of the Year Award. As a sophomore in 2020, Sever and teammate Cole Dixon were co-winners after leading Carson to the first county championship in school history. As a junior, Sever got better. As a senior, he took it to another level.

“It took a lot of self-motivation to put the work in during the summer months,” Sever said. “I was in the pool a lot, and  I also was in the gym a lot. I got stronger. I tried to do something every single day to get better, and that’s why I’m having my best year.”

Sever spent some growing-up years in New England. He was swimming before he was 5 and was in meets by the time he was 7.

His father, Michael, was a former East Carolina swimmer who coached college swimmers at Rhode Island University and the University of Maine.

The Severs relocated to Rowan County when Michael was hired as Catawba College’s head swim coach in August 2015.

Sever made an instant splash for the Cougars as a freshman in the 2019 Rowan County Championships, winning the 500 free and taking second in the 100 backstroke.

As a sophomore, he was 4-for-4 in the county meet, winning the 200 IM and 500 free and helping Carson take first place in the two pivotal relays that keyed that surprising breakthrough county championship.

COVID eliminated the Rowan County Championships from the schedule in 2020, but Sever clearly was the county’s standout. He swam on the county’s fastest 200 free relay team and he was the county’s best in the 200 IM and the 100 breaststroke. He was a regional qualifier in three events, but his strongest regional finish was sixth, so he didn’t qualify for the 3A State Championships.

Coming up short provided the motivation for his workouts over the summer. He hadn’t made it to states since his freshman season, and he was determined to end that drought.

“I really wanted to make it back to states as a senior and I was going to give everything I had to accomplish that goal,” Sever said. “These last few years were tough, a lot of adjustments, a lot of challenges. The COVID season we had to put a mask on as soon as we got out of the pool, so it was good to have  more normal season this year.”

At the Rowan County Championships on Jan. 26, Sever displayed the results of all that extra work.

He didn’t just win events. He shattered standards with a phenomenal performance. He knew he had a chance, based on his seed times, and that freaked him out a little bit, but then he went out and did what he wanted to do.

“He just crushed it at county,” Parrish said. “A great example of hard work paying off.”

Sever was clocked in 1:01.92 in the 100 breaststroke, as coaches and teammates celebrated. West Rowan’s Jeff Dockins had held that meet record for a generation — since 2004 when he clocked 1:02.45.

Carson won the lion’s share of the individual events in the county meet, but South Rowan returned to its familiar role as the county’s top dog with superior depth.

After some solid performances in the South Piedmont Conference championships — the SPC was an incredible swim conference  this year — the serious business arrived for Sever.

The West Regional at the Mecklenburg Aquatic Center in early February would mean everything because those brief minutes in the pool were going to decide if all that summer work had been worthwhile. A handful of minutes would decide if Sever would make it back to the state meet to finish his high school career.

The anxiety level was high, but he turned in the finest performances of his career in the pressure cooker of the regional.

“The county meet had been close, as we knew it would be, and that was a draining day,” Sever said. “But then I had little time to gather myself and I was well-rested for the regional. I went out there, did my best, and the results were very good.”

He moved on to 3A State Championships in Cary. Just getting there meant a lot, but there was more work to do.

“Second in the state, that’s my proudest individual accomplishment,” Sever said. “But there were are also a lot of team things to be proud of. I was part of a lot of firsts for Carson’s swimming program.”

His dream for the future is the Coast Guard Academy and flight school. He’ll find out about that application in April.

If the Coast Guard Academy doesn’t work out, he will likely head back to New England to boost a college swim program.

Whatever happens next, he’ll be remembered as a record-breaker and a program-changer. Carson was finishing fifth in the county as recently as 2015.

He’ll be remembered as the kid who was never satisfied with a good time. He wanted the great ones — and he worked to get them.

“Cooper was already so good when I started with the swim team,” Parrish said. “To see him continue to drop outstanding times was just amazing, but he’s more than a great swimmer. This is a tremendous kid, an outstanding leader, the ideal teammate. He was always ready to help anyone.”

First or second in the Rowan County Championships in an individual event or first in a relay event.

*Also recognized by the Post are swimmers who didn’t meet the first criteria but scored 20 or more individual points.