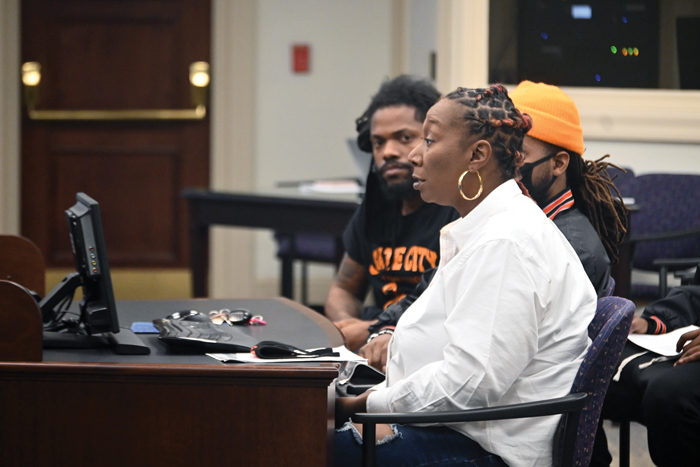 Natalie Anderson/Salisbury Post — Ingram Bell, program manager for the Gate City Coalition in Greensboro, spoke to Salisbury City Council members Tuesday to discuss her group's efforts to mediate and get at the root causes of violence using the "cure violence model." She was joined with other members of her team who once were "part of the problem but are now part of the solution."

SALISBURY — Greensboro resident John Awolowo said he sold drugs for most of his life before a seven-year incarceration that began when he was 23.

Now at 35, Awolowo does electric work and carpentry. But his most impactful job is serving as an example to bring members of his community involved in violence back over to the right side of the tracks.

Awolowo is one of seven Greensboro residents who work with the Gate City Coalition to mediate violent situations and work to get at the root cause of violence. The Gate City Coalition team visited Salisbury on Tuesday night to talk with city council members about how they use the cure violence model, which was founded in 1995 by Dr. Gary Slutkin, former leader of the World Health Organization’s Intervention Development Unit. Slutkin says the idea is that violence spreads like a disease — violence begets more violence — but employing interrupters can cut the cycle short and change community norms. It launched in Chicago and spread across the nation in the following decade.

The model has cropped up cities like Baltimore, New Orleans and New York City. But some closer to home have implemented the program as well, including Greensboro, the city and county of Durham and Charlotte.

Council member Anthony Smith has championed the model since it was first discussed locally during the 2017 Stop the Violence summit. Smith said the first step is to invest in the assessment from Cure Violence Global, which involves a team visiting Salisbury and conducting its own assessment. The assessment costs $25,000 and Smith said a grant request to cover that cost has been submitted to the Blanche and Julian Robertson Foundation.

Smith said the precedent for addressing issues in Salisbury has been a multiple-strategy approach and sees the issue of addressing violence no differently.

Smith added that he’s in full support of existing programs like Cease Fire, which is a partnership between the Salisbury-Rowan NAACP and Salisbury Police consisting of volunteer de-escalators and neighborhood canvassing events. But Smith said that strategy should be expanded.

Ingram Bell is the program manager for Gate City Coalition and a gun violence victim, suffering a gunshot to the head in 2011. Gate City Coalition consists of “violence interrupters” who often come from the same circumstances many current participants are in. Meanwhile, outreach workers help participants develop temporary, short-term and long-term goals. Bell said each worker handles anywhere from 10 to 15 cases each week. Services include helping participants secure stable housing, educational and employment opportunities as well as getting off probation.

Bell said Gate City Coalition often provides a variety of events and workshops to participants, including basketball tournaments and game nights. Additionally, her team members often field calls in the middle of the night to talk down those who want to engage in violence and come out of pocket to help those find a better path for their lives.

“And we’re talking about somebody that is liable to go outside and shoot you because you looked at them wrong,” Bell said. “But instead of dong that, they found something better to do and they have someone that constantly believes in them and that puts in the effort and works with them.” 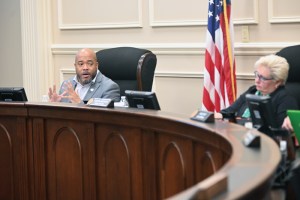 In 2019, the city of Greensboro formally endorsed the Gate City Coalition, which is housed by nonprofit One Step Further, by granting the program $500,000.

During the public comment period Tuesday, former council candidate Jonathan Barbee spoke against the cure violence model, casting suspicion on funding a non-governmental organization rather than “more well-established” organizations like Salisbury Parks and Recreation Department and its Miller Recreational Center. Barbee also expressed concern with taking advice from a public health expert with no background in law enforcement.

Barbee cited a spike in crime across a number of cities that have this model in place, including Chicago and Durham. Smith later clarified that Cure Violence targets hot-spots and the program is carried out within those designated areas as determined by the Cure Violence Global team.

During the same period, the report shows members of the Gate City Coalition met with 456 individuals to build meaningful connections, assist with conflicts and/or engage in conflict mediation. Staff reported mediating 141 conflicts in and around the target areas.

A 2020 review from John Jay College concluded the evidence base for violence interrupters was “promising but mixed.” President Joe Biden’s administration has credited it with being an “evidence-based model” and has committed to directing new funds and resources to violence interrupters in similar programs.

“I think it’s a both/and. I don’t think one program is better than the other,” Bell said. “I think a collaboration of programs could work. I think it takes someone who has the knowledge of the street to be able to be in that position.”

LeGrande Roseborough of Gate City Coalition said the camaraderie of gangs is what first attracted him at the age of 17. He cited poverty as the primary driver of why he continued to rob people before turning his life around years ago. Additionally, when children aren’t taught about all the options they have when they graduate, they often turn to what they know. As someone who grew up around gangs, it was once all he knew.

“It’s a different aspect when you’ve got somebody that actually can say I’m speaking from experience and not just from the outside looking in,” Roseborough said.

Peckman said existing programs in place to address violence can work in tandem with a cure violence model.

“Let’s lean into collaboration, not competition,” Peckman said. “It takes a village.”

Lee agreed in her comments.

“Violence can no longer be addressed outside of its deep connections to systemic root causes such as poverty, food scarcity, unaffordable housing, lack of economic opportunity and mobility, mental illness, substance abuse and the disproportionate impact of incarceration,” she said.

High school boys swimming: Sever took it to another…