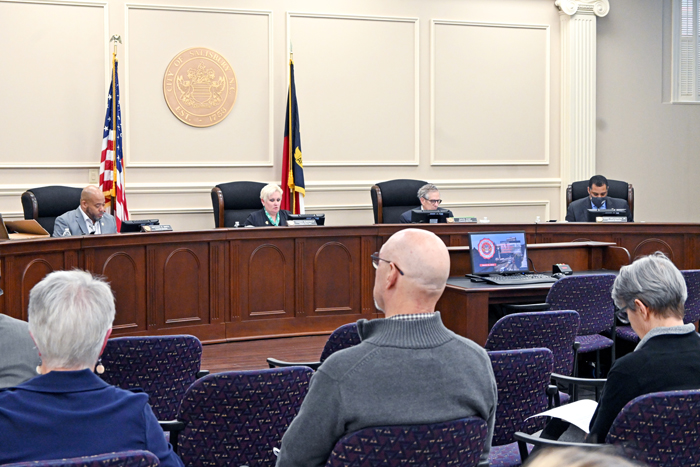 Natalie Anderson/Salisbury Post — Salisbury City Council opened its chambers for in-person attendance Tuesday during the March 15 meeting. Since the start of the pandemic, the council has exclusively held its meetings virtually with a few exceptions in 2021.

A formal ordinance will be presented at the April 5 meeting, which council members are expected to approve. If so, the district would be operable by May 1.

A social district would allow consumers to purchase alcohol from state-licensed businesses and restaurants and walk around a designated district with specially marked cups. Downtown Salisbury Inc. has led the initiative since last fall when state lawmakers passed a law allowing North Carolina cities to take advantage of this economic opportunity. Kannapolis enacted its district in October shortly after the legislation passed.

DSI has cited a number of pros for the district, including business growth, increased downtown spending and another revenue stream for businesses. Ultimately, the goal is to make Salisbury a downtown destination where people will spend the day or weekend instead of just a few hours.

At the March 1 meeting, DSI proposed the boundaries include the entirety of the municipal services district, the area officially considered to be downtown, in addition to the Napoleon Bonaparte McCanless House at 619 South Main St., which is working to become an events and wedding venue. However, youth safety concerns discussed at the March 1 meeting prompted council to consider starting small.

At Tuesday’s meeting, DSI presented a revised map that tightened the boundaries to address those concerns. Within the MSD, the new map shows the district bounded by the intersection block of Jackson and Innes streets, Fisher and Church streets, across Horah to Lee Street and from Fisher to Cemetery Street.

DSI modified the operating hours from noon to midnight Sunday through Saturday, with drinking hours beginning at Bell Tower Green Park at 5 p.m. Council members ultimately agreed to delay that start time by an hour in warmer months so that families can enjoy an extra hour of sunlight without drinking taking place.

Additionally, DSI Director Sada Stewart Troutman said she spoke with local religious leaders whose churches would fall inside the district. She said those leaders expressed no need to oppose the district. Businesses or establishments can choose to not be active participants in the district, with signage required to reflect that.

Karen Hobson, a former Historic Salisbury Foundation executive director, said she’s for the district with some reservations. She was glad to see the “overly broad” area originally proposed be tightened, and that hours of operation won’t span until 2 a.m. like initially proposed. But she noted a number of back alleys and parking lots included in the district and asked the council to consider excluding those for safety reasons.

Salisbury resident Tom Overcash said the city would be “in serious trouble” if it passes the district and cautioned against more opportunity for public drunkenness. Overcash also asked how the city could distinguish what’s in district cups.

Overcash said he’s an elder at his church but enjoys a nightly swig of scotch whiskey.

“But this is going to be trouble,” he continued. “And we need to ask ourselves is this good for Salisbury? And I think the answer is no.”

Chris Ostle, owner of Fish Bowl, said he was in favor with some hesitation. His concern was drunk driving and added that he often has to prevent patrons from getting in their car to drive home after drinking.

Tiffany Day, owner of SHUG’s at Brooklyn South Square, said she was in favor of the district, which could promote activity and patronage between businesses while attracting new ones.

Samantha Haspel, a DSI board member who’s also helped bring this proposal to council, said she was representing herself Tuesday night as a private citizen and bar owner. Drunk driving is an issue close to her heart, she said, but added that patrons could get into their vehicle after a night of drinking with or without the district. Additionally, businesses understand it’s a privilege and ABC licenses require merchants to monitor how much someone is drinking.

Haspel said there are lots of understandable fears, but spending time in Kannapolis will show those fears haven’t played out in reality.

Council member David Post asked about the additional staff and costs. Stewart Troutman said the extent of additional work needed across city departments is minimal. In addition to staff support from Salisbury Police and the Public Works departments, the finance department will provide budget support, the city’s engineer Wendy Brindle will continue communications with North Carolina Department of Transportation and communications staff will help promote the district.

Interim Manager Brian Hiatt added that in discussions with Kannapolis city staff, it’s not anticipated that extra staffing will be needed for the district in Salisbury.

Council member Anthony Smith commended DSI for their “due diligence” in gathering feedback and doing much of the leg work before bringing the proposal to council. Smith added that he supports any initiative where groups come together to creatively approach the economic impact while being responsible.

Council member Harry McLaughlin Jr. said he liked this idea to help businesses “survive and stay ahead,” but added that other initiatives are needed as well. He shared concern of youth safety, noting his own witness to drunken community members who come into his store, McLaughlin’s Grocery, which sells alcohol. McLaughlin said it’s not about Salisbury being the first, but being the one that gets it right.

At the March 1 meeting, Lauren Alexander-Persse of YSUP Rowan, a nonprofit aimed at substance use among youth, shared concerns about influence the district could have on youth attitudes toward alcohol consumption. She called for some compromises, including opaque cups. Stewart Troutman told council members Tuesday that there are options, displaying a white compostable cup option and a bright yellow cup.

City Attorney Graham Corriher and Stewart Troutman said they’ll return to the council on April 5 with a cleaned-up copy of the ordinance, which will also describe the district boundaries.

Mayor Karen Alexander was not present at Tuesday’s meeting because she is in Washington, D.C. for the National League of Cities conference.