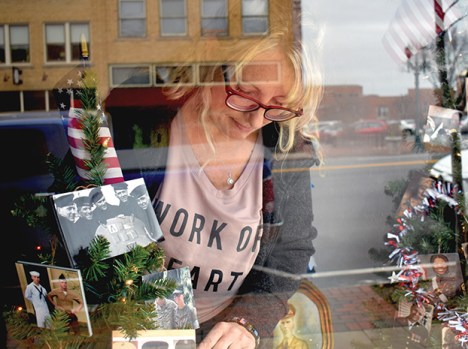 Lori Egerter works behind a glass window on East Innes Street to curate one of The Tree of Valor exhibits currently on display in downtown Salisbury. Ben Stansell/Salisbury Post 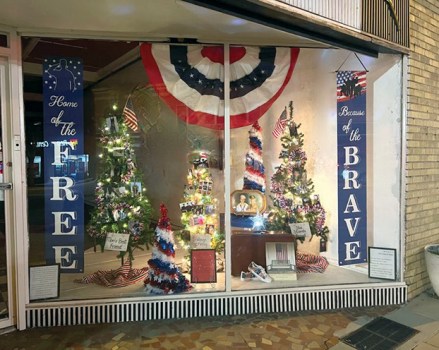 The Tree of Valor display at 123 E. Innes St. Each tree in the display has its own theme. Photo submitted. 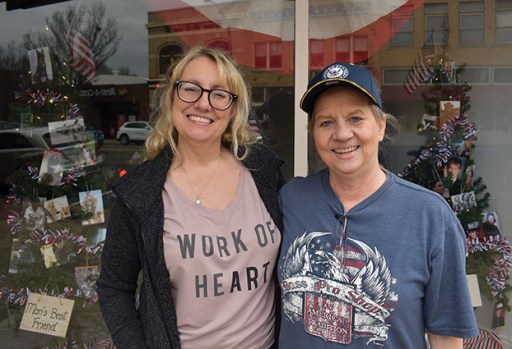 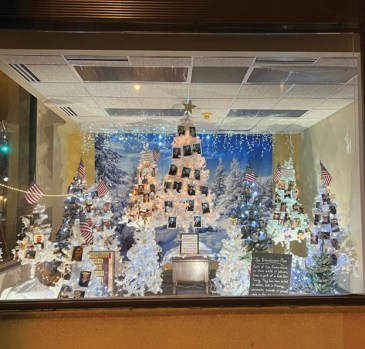 The "Remembrance Place" exhibit at 130 S. Main St. honors those who died during service and the families left behind. Photo submitted.

SALISBURY — The holiday season is long gone, but artificial Christmas trees decked out in lights are popping up behind glass windows in downtown Salisbury.

Instead of ornaments, the trees are filled with hundreds of faces — each of them a current or former member of the U.S. military.

The displays have been carefully curated by Lori Egerter and Teresa Martin. Egerter is the founder of The Tree of Valor, a traveling pictorial exhibit that seeks to honor and raise public awareness for military members by sharing their pictures.

“We don’t want the faces or the names to be forgotten,” Egerter said.

Egerter, Martin and a handful of helpful family members and volunteers have been busy during the last few weeks, transforming windows at 123 E. Innes St., 206 S. Main St. and 130 S. Main St. into eye-catching tributes.

Egerter was inspired to start The Tree of Valor by her son Josh Groft, who is a U.S. Marine. Groft’s first deployment was to Okinawa, Japan, in November 2018, which came just before his favorite season: Christmas. During his final days at home, Egerter decided to send him off by bedazzling the entire house with holiday spirit. Never mind that most other homes in their neighborhood had Halloween decorations.

“I glammed that house inside and out,” Egerter said.

Egerter, who lives in Kernersville, placed a photo of Groft on a Christmas tree and surrounded it with other pictures of soldiers collected from friends and family. Even after the holiday season, Egerter continued to stockpile photos of soldiers. By Christmas of 2019, she had hundreds of pictures. She hung them on several trees showcased during December in the Greensboro Cultural Center.

Since then, Egerter has brought her Tree of Valor displays to various veterans events and public places throughout the region, including the Piedmont Triad International Airport in Greensboro and the Richard Childress Racing Museum in Lexington.

Along the way, Egerter has been aided by her 12-year-old daughter Lexi. Lexi, who has cerebral palsy and epilepsy, has a penchant for connecting with veterans.

“Her brother was her best friend and when he left, she was sad,” Egerter said. “Meeting all of these veterans helped fill the void. They literally have adopted her. She loves three things: the flag, the national anthem and veterans.”

Martin, a Navy veteran and author of Sitting With A Soldier, joined Egerter’s efforts a few months ago after seeing a Tree of Valor display at Cooper’s Vintage Village in Kernersville.

“I saw the display for the first time and I had to meet her because it meant that much to me,” said Martin, who lives near Kernersville. “To see it in its entirety takes your breath away.”

Martin even discovered a picture of a fellow Navy veteran who she served with on one of Egerter’s trees.

“These trees mean a lot more to a service member than to a civilian because that’s our family,” Martin said. “Those are our brothers and sisters. Those are the people we depended on.”

Once Egerter and Martin decided to bring The Tree of Valor displays to Salisbury, they started contacting owners of vacant downtown storefronts. Wallace Realty welcomed them to set up shop at 123 E. Innes St. The overall traveling exhibit is called “Cadence of Courage,” but each display and each individual tree has its own theme. One is dubbed “Man’s Best Friend” and is loaded with pictures of soldiers and their service dogs.

Over the weekend, Egerter and Martin finished two displays at 130 S. Main St. in the former Wells Fargo building owned by Greg Alcorn. One of the exhibits is called the “Remembrance Place,” which honors soldiers killed in action, training accidents and suicide. The display has a wintry design, Egerter said, because families who have lost loved ones compare their grief to always living through winter.

In another window at 130 S. Main St., Egerter and Martin erected three trees honoring Ukrainian soldiers. At the bottom of the window are yellow signs with quotes from Ukrainian President Volodymyr Zelensky. Egerter and Martin plan on adding more displays to other windows on the building soon. At 206 S. Main St., which is owned by Lane Yates Realty, the duo is setting up an arrangement detailing the history of The Tree of Valor and a Navy exhibit.

Since coming to Salisbury, Egerter and Martin have been helped by local veterans from the Frontier Coffee Shop, a group that meets for a weekly lunch at Christiana Lutheran Church.

The displays will remain up in Salisbury for several weeks before The Tree of Valor moves on to its next destination. Egerter plans on setting up her trees in towns throughout North Carolina, but her ambitions extend further than the Tar Heel state.

“We want to go from sea to shining sea,” she said.

With requests to bring The Tree of Valor displays to Pennsylvania, New Jersey, Florida and Wyoming, Egerter shouldn’t have any problem making her way to the west coast.

The Tree of Valor is funded entirely through donations and could always use more volunteers, wood, artificial Christmas trees and pictures of military members. Egerter said she would love to bring window displays to North Main Street and West Innes Street if anyone is willing to let them use a vacant storefront.

More information about The Tree of Valor can be found on its Facebook page or by contacting Egerter at thetreeofvalor@gmail.com or by calling 717-515-7418.