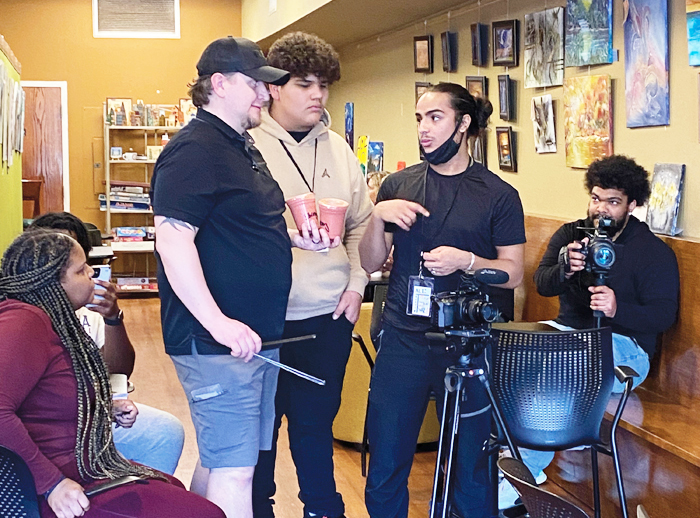 SALISBURY — A video produced by a group of local students asks people to make some connections in the community.

The video opens on a girl in a dark room with the audio line “Can I touch your hair?” It devolves into a cacophony of prejudiced statements as it cuts between the faces of people of color before landing on the title card “Take a Seat”and fading into a shot from inside Mean Mug Coffee Company.

The video was a PSA project from students working with the nonprofit Inside Out Global. The organization provides filmmaking opportunities for young people. Salisbury City Council member Anthony Smith is on the executive board. He said the organization brings in film professionals to work with students.

Salisbury High School senior Ali Khatib was the director of photography. He is a member of the Salisbury Youth Council and he heard about the project from Smith during a meeting. It seemed like a good fit, and he has already worked on video production locally and with some companies in other states.

Khatib said the students eventually settled on a PSA about the idea of social discomfort and the concept of “seeking discomfort.”

“That’s something I try to live my life by,” Khatib said. “Growth only happens at the boundaries of what is comfortable.”

Kharisma Gilmore, a seventh grader at West Rowan Middle School, helped edit the video. She also acted in the video as one of the girls sitting at the table. She had never done anything like this before.

“I didn’t know much, or anything, about film,” Gilmore said.

She learned about how to use a camera and edit along with lighting principles like how to reduce glare off glass surfaces.

March 5 was a full day of working on the project. The students learned about lighting, videography, editing, script writing and sound. Gilmore said it was harder than she expected but she always got her questions answered and it was fun. She spent about two hours working on the edit and it was finished by the clinicians.

“The students we had this time around were very engaged,” Smith said.

He said they wanted to address many issues but narrowed it down to discrimination.

Inside Out Executive Director Beth Fussner said the organization connected with Smith in 2016 looking for a way to give students a voice. She said the film camps provide a way for students to get some exposure and talk about issues and experiences in a safe space.

“Because film incorporates so many disciplines in the arts like graphic design, music, set design, writing, telling a story, even if they’re not particularly interested in the camera necessarily or editing or any of that stuff, there’s something for everyone in the process,” Fussner said. “We have seen students really respond to that.”

Fussner said the program has helped reach students who are underperforming in academics as well as those who are at the top of their classes. She said the kids were resilient. They worked through a sound equipment malfunction and not needing the lighting they expected at the shop.

“You may plan it one way, then things just happen or you have to adjust,” Fussner said, adding many of the students would have stayed hours longer to work on the project if they were allowed.