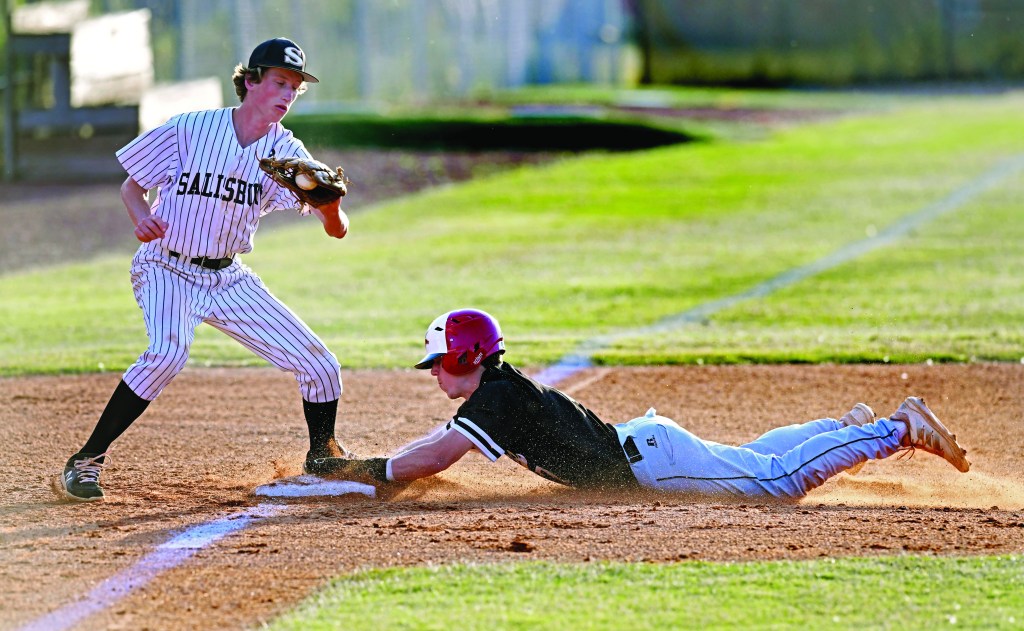 SPENCER — Salisbury’s baseball team used a six-run third and a 10-run fifth to beat North Rowan 24-9 in a wild non-conference game on Monday.

Salisbury (4-2) had only eight hits, but with the aid of 18 walks and 10 errors, Hornets scored early and often.

North (1-3) stayed with the Hornets for three innings — Salisbury led 11-9 at that point — but the Hornets got three in the fourth for a 14-9 lead and then blew it open with that huge fifth frame.

Aiden Mowery, Jack Everson and Hank Webb had two hits each for the Hornets. Will Webb scored four times.

Kaleb Burleyson had four RBIs. Evan Koontz had three. Mowery and Everson drove in two each.

Koontz pitched the bottom of the second, and the Hornets took the lead for good in the top of the third, so he earned a wild win.

For North Rowan, Malakie Harris had two hits. He homered and drove in six runs.

North had seven hits and benefited from SHS errors.

Gouge had a double and a triple. Zander Burton and Loeblein drove in two runs each.

West trailed 4-3 going to the seventh, but Connolly tied the game with a run-scoring double.

Knox’s double started the winning surge in the eighth. Gouge lined a triple to right to put the Falcons ahead, and Graham made it back-to-back triples. After a walk, Zander Burton doubled home two. Loeblein’s double tackled on another run.

Jaden Johnson had a triple for the Wonders (1-4).

STATESVILLE — West Rowan won 8-0 against Statesville on Monday in a non-conference matchup.

Vanhoose had three assists. Guerrero had two helpers.  Jisel Suarez. Diamond Hernandez and Mead had one each.

Emily Kelly and Alison Campos made two saves each.

MOORESVILLE — Lauren Vanderpool’s two-run triple in the bottom of the seventh gave Mooresville a 6-5 walk-off win over Carson on Monday in an exciting non-conference game.

The Blue Devils got two homers from Brooke Piper and one from Bentli Meadows.

Campbell Schaen was the winning pitcher for the Blue Devils (4-1).

Carson pitcher Lonna Addison struck out nine and had no walks.

Addison homered for the Cougars and drove in three. Addison and Phoebe Cole had two hits each.

Addison’s two-run single in the fifth gave Carson a 5-3 lead.

Piper’s solo homer in the sixth cut the Cougars’ edge to 5-4.

Carson’s only error of the game started the bottom of the seventh and gave Mooresville an opening. A one-out single put two runners on.

The Blue Devils were down to their last out when Vanderpool tripled to right.

Carson is 0-4, but the Cougars’ luck should turn around this week.