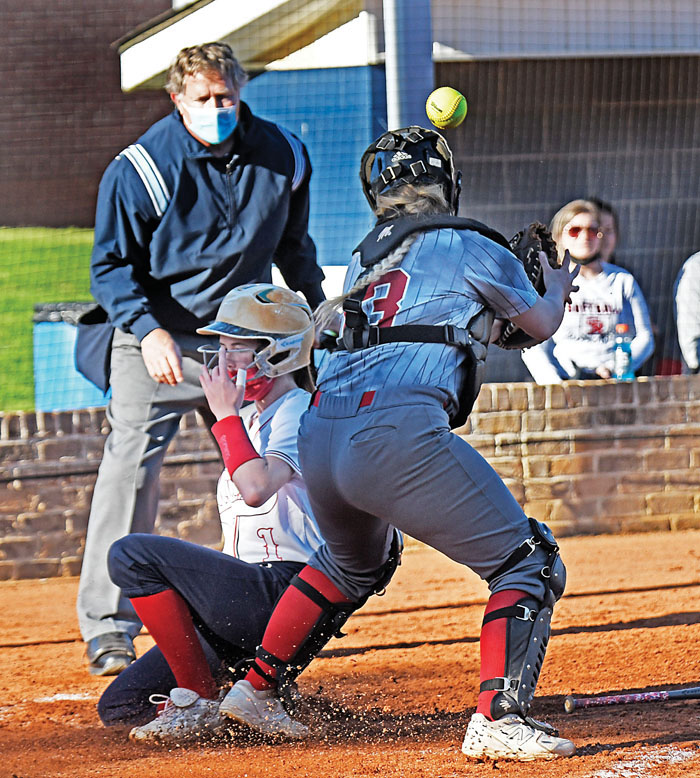 Second in a series of reports on local softball teams

GRANITE QUARRY — East Rowan’s softball team has subtracted the battery that steered the Mustangs to surprising success in 2021.

Missing is Haley Strange, who racked up several pitcher of the year accolades as a senior and fired two shutouts in the 3A state playoffs.

Strange gave East a chance in the third round, but the Mustangs lost 1-0 to a stout Alexander Central team that finished as runner-up in 3A.

But the Mustangs were a very young team in 2021 and could be better offensively and defensively this season.

They definitely will be deeper.

“We had some practices with eight last season,” said Todd McNeely, who returns as head coach after working a few short-handed miracles in 2021. “With the injuries we’ve already experienced this season, that would’ve finished us off last year.”

The added depth this spring is due to a large freshmen group of eight.

“There’s another big group coming over from Erwin (Middle School) next year,” McNeely said. “Next year we’ll be able to have a jayvee team.”

Perkins and Miller have extensive travel-ball backgrounds in the circle. They can also swing the bats.

Miller has good height and good bloodlines. She’s the daughter of assistant coach Candice Hurlocker Miller, an All-State pitcher for the Mustangs in 2004.

East’s new catchers are sophomore Maddie Roberts and freshman Chloe Shank. Both can swing it and have travel-ball experience.

The infield will be anchored by Mac Misenheimer. The senior shortstop was East’s top hitter in 2021 and is a Chowan recruit.

“We’ll need to get a lot of leadership from her,” McNeely said. “Senior season, and she’ll do her thing.”

The infield alignment for East will include Myah Sifford, the team’s only junior and an all-county pick in 2021. She’s expected to play first base.

Freshman Addie Plott is the likely starter at second base, with Kori Miller, another freshman, at third base.

Liberty Schroeder has swung the hottest bat for East in the early going, so McNeely will find a spot for her in the lineup. She can play several positions.

“She’s that Swiss Army knife for us,” McNeely said. “We can use her anywhere.”

Freshman Kady Collins will be in center field.

Jaylea Legg got some experience as a freshman and could be the left fielder.

Caroline Snow helped East’s volleyball team as a freshman. The lefty adds another option to a softball squad that is dealing with injuries to some veterans.

Emily Davis, one of East’s three seniors, injured a knee.

Sophomore Brooke Vander Pol had some key hits for the Mustang last season, but has been dealing with hamstring and knee issues.

“With the injuries and the youth, we’ve been kind of feeling our way early,” McNeely said. “One thing we do know is we’ve got a lot more speed than we had last season.”

East beat Mount Pleasant 3-1 to open the season and won easily against Salisbury and North Rowan.

The Mustangs will find out what they have in the next few days. They start South Piedmont Conference play today at home against Lake Norman Charter. They’ll welcome Alexander Central on Wednesday and will visit always tough Central Cabarrus on Friday.

“We’re excited about the chance to play a full season,” McNeely said. “Last season, it finally got started, and then, poof, it was gone. Every year is a different mix, but hopefully we’ll find that same kind of chemistry that made us a good team last year.”

2021 playoffs: Lost to Alexander Central 1-0 in the third round