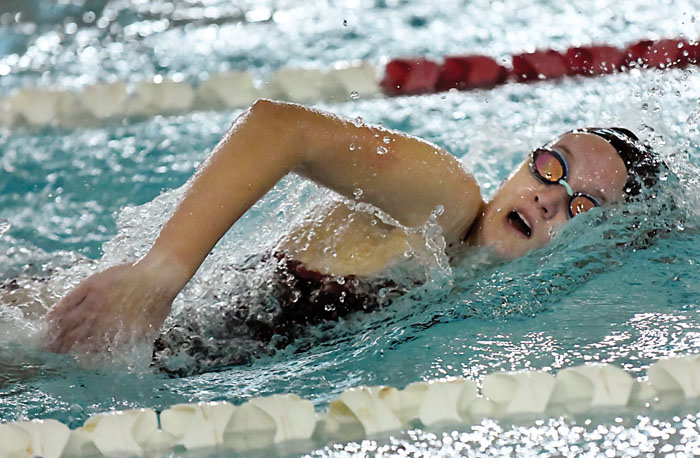 Salisbury's Sage Huffman won the 100-yard freestyle in the county swim meet. photo by Wayne Hinshaw; for the Salisbury Post

SALISBURY — Salisbury senior Sage Huffman is a different sort of Rowan County Swimmer of the Year.

A multi-sport athlete who also competes in cross country and soccer, Huffman is a rare winner of the award who isn’t a club swimmer going hard at the sport year-round.

She marches to a different drum, and that’s not a bad thing. She’s a 4.5 student who ranks 12th in the senior class, but her dream career isn’t in an office; it’s in forestry.

That explains why she’s applied to far-off universities such as Vermont and Montana.

“Not a swim club kid, never has been,” Salisbury coach Sallie Pittman said. “But when it was time for swimming, Sage was a swimmer. For four months of the year, she invests everything she has into being a good swimmer. That’s four months of hard work, four months of discipline, four months of dedication. Her work ethic is very special. She took practice seriously every day, always pushed herself to finish her sets. By pushing herself, she motivated her teammates. That’s one reason we were as successful as we were with a small team.”

Huffman was a regular at the pool in her younger days, but swimming was just for fun.

“No competitive swimming, but a friend, Maggie Alexander, swam and talked me into swimming for the school team,” Huffman said.  “She said swimming was fun and I decided to give it a try. I turned out to be a pretty natural swimmer. It’s been a lot of work, but it’s also been a lot of fun.”

By her sophomore year, she made All-Central Carolina Conference on two relays.

The Hornets faced this season without a dominant swimmer for the first time in forever. Kat Morrison was amazing for four years, and her senior year intersected with the arrival of the Knorr twins, Katie and Emily, who would rule the local swim scene for the next three years. Those three girls devoted their lives to swimming and filled trophy cases.

The Hornets were determined to remain a factor even without a potential state champ on the roster sheet.

“It was really amazing the amount of work the team put in,” Pittman said. “You look at Sage’s times. She was swimming the 100 in 1:14 as a freshman, and now she’s down to a minute. That’s enormous improvement for that event.”

In the Rowan County Championships, South Rowan won the meet with depth and numbers, but the Hornets took eight of 11 events. Huffman swam on winning 400 freestyle relay and 200 medley teams with junior Kate Burton, sophomore Lucy Heilig and freshman Ava Morris and won the 100, which is her best individual event.

In an unusual strategic move for that meet, she swam the 500, instead of the 50. That endurance event came shortly after she expended major energy in the all-out 100.

It was sort of like running the 3200 right after the 400 meters to put it in track terms, but Huffman won. Huffman and Morris were both 4-for-4 in the county meet.

“I’d practiced the 500 just once before that meet, and it was a challenge, but I believed I could do it,” Huffman said. “You really have to calm your body down for the 500. You have to find a comfortable pace, and I was able to do that.”

In the Central Carolina Conference Championships, Salisbury prevailed handily over second-place Lexington. Huffman was 4-for-4 again, with wins in the 50 and 100 free as well as the 200 medley and 400 free relays.

“We set goals for this team and there was a lot of satisfaction in winning a championship,” Huffman said. “But the main goal all along was to qualify for states. We wanted to get to states and we worked all season to get there.”

Huffman and her teammates had some of their best moments in the 1A/2A Central Regional held in early February in Greensboro.

She was a state qualifier in all four of her events.

“We’re getting ready to leave and they’re calling out the regional scores and I’m half-listening because I’m figuring out which girls are leaving with their parents and who is going to be with me,” Pittman said. “And then I hear, ‘Salisbury, 5th place, 133 points,’ and I’m wondering if I heard it right. I was as shocked as anyone. Our girls were amazing.”

The most amazing thing was it was a team led by a girl who would soon be on the soccer pitch.

Huffman and the Hornets still had to finish the job at the 1A/2A State Championships.

They didn’t do as well as they wanted to in the preliminary swim for the 400 free relay, the traditional meet-ender.  They didn’t make the championship final, but they were resolved to go out with their best effort.

Wrapping up Huffman’s high school career, the Hornets swam 4:06.95 in the consolation final, seven seconds better than their time in the prelims.

They finished 10th. They left Cary with heads high and hearts full.

Huffman went on a recruiting visit to Warren Wilson College, near Asheville, so future competitive swims haven’t been ruled out, but she’ll probably turn up next fall at N.C. State, Appalachian State or one of those exotic locales to which she applied.

But for the next few months, she’ll put everything she has into soccer.

She’ll give the Hornets more months of hard work, discipline and dedication on the defensive end.

On the offensive end, the Hornets have an absolute phenom in Georgia recruit Sutton Webb, who is going to score the goals, but Huffman will be a big part of any success the Hornets have.

“Sage is special,” Pittman said. “We didn’t have the Knorrs this season, so we had to get where we wanted to go in a different way, but we ultimately still got most of the same team results. We won conference. We won the events at county. We were fifth in our regional, and we competed well at states. That’s a tribute to the kind of kids we have in the program.”

First or second in the Rowan County Championships in an individual event or first in a relay event.

*Also recognized by the Post are swimmers who didn’t meet the first criteria but scored 20 or more individual points for their teams.

With Freeman a free agent, Braves get star 1B…