The Morning Glory plans brick and mortar location, aims to be ‘permanent’ part of Rockwell community 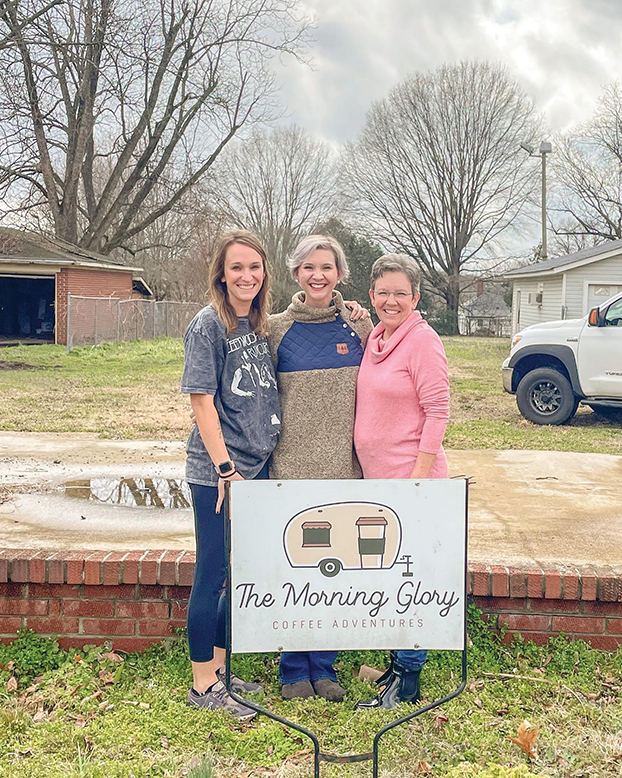 Madison Straight (middle) stands with her sister Abby Bagwell (left) and mother Renae File in front of the empty lot where The Morning Glory will build a brick and mortar location. Straight started the business, but her family will keep it running now that she has moved across the country. Photo submitted.

ROCKWELL — The town’s beloved coffee camper is moving into a bonafide brick and mortar.

The Morning Glory Coffee Adventures has announced plans to build a drive-thru shop at 319 W. Main St. Opened in early 2020 by Rockwell-native Madison Straight, The Morning Glory has become a hot spot for creative coffee drinks and tea — all served from a mobile camper renovated with the trimmings of a typical café counter.

Straight opened the shop after returning to North Carolina from Alaska, where she worked her way up from barista to being the manager of multiple coffee shops. The Morning Glory started in a borrowed church trailer in the Ace Hardware parking lot and eventually moved into a camper stationed in a vacant lot across the street.

Owning a coffee shop in her hometown was always a dream for Straight. Now, she’s excited to make The Morning Glory a lasting fixture in Rockwell.

“We are so honored to become a permanent location in our hometown,” Straight wrote in a Facebook post announcing the brick and mortar.

Straight may have launched The Morning Glory, but the daily operations of the shop are now managed by her family and a few friends. Straight recently relocated to Tacoma, Washington with her husband, Alex, who is in the military.

In the months leading up to her cross-country move, Straight said she prayed about the coffee shop’s future. She found an answer to those prayers when a customer told her he wanted to help The Morning Glory build a brick and mortar location.

The new location will be raised on an empty lot near the town’s new police department, less than a mile from the camper’s current spot downtown.

“It’ll be a bigger version of the camper,” Straight said. “There will be two windows, a double drive-thru so people can come through and get coffee and line up on either side.”

Although Straight has enjoyed working out of the camper, affectionately named Juanita, having a permanent location will allow The Morning Glory to serve its growing, loyal customer base.

“We’ll be able to get more customers in and out,” Straight said.

There aren’t plans for indoor seating in the new spot, but Straight said they’re tossing around the idea of having a patio with some outdoor seating and a walk-up window. The new location will likely mean adding more employees and Straight said she would also like to expand The Morning Glory’s pastry menu in the new space by partnering with local bakers.

The plan is to start the construction process sooner rather than later, but Straight is anticipating delays along the way. In those moments, she’ll be happy to know that the community is behind the move. Almost 300 people have commented on the Facebook post announcing the brick and mortar, all of them wishing the shop well.

“I kind of knew going into it people would be excited for us so it’s just been confirmation that this is the right next step for us,” Straight said.

Managing a physical location should be easier than setting up and hauling around a mobile unit, which makes Straight feel better about leaving the responsibility of running the shop in her family’s hands.

Abby Bagwell, her sister, has taken charge of running the day-to-day operations of The Morning Glory and the rest of Straight’s tight-knit family pitches in as well.

“My family has just been very supportive, always, of anything me and my sisters have done,” Straight said. “They really wanted to continue to do it and they saw the huge impact it had in the community.”

Straight won’t be serving coffee at The Morning Glory, but she plans on managing the business side of the shop from her new home in Washington. She’ll continue to help craft seasonal drink menus and run social media as well. She’ll be sending back any information or intel she learns from immersing herself in the coffee-crazed culture of the Pacific Northwest.

The camper’s future has not yet been decided. The Morning Glory plans to take a break from setting up shop at events while the new building is constructed. After that, Straight said the camper might still be used for special occasions or large events.

More information about The Morning Glory can be found on the shop’s Facebook page or at themorninggloryllc.com.