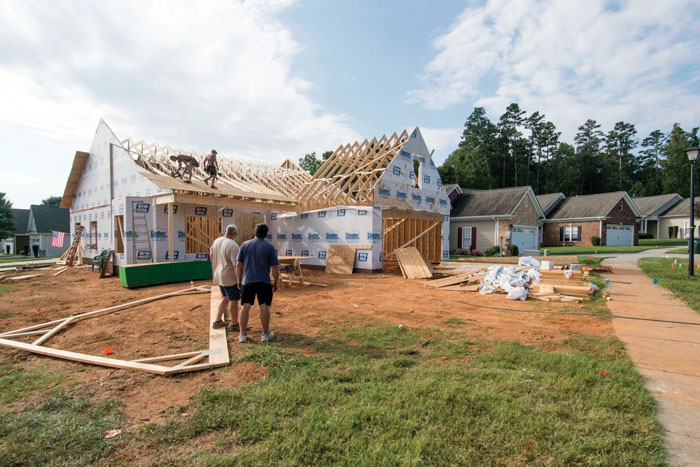 SALISBURY — Salisbury resident Tawanda Doby said she moved to the Lakewood Apartments in 2019 and paid $850 per month for her unit.

Her lease renewal for this year showed that rate would increase to $1,600. When she called the office to ask if it was a mistake, she was told it was in line with “the area market increase.”

That leaves Doby with less than $100 from one of her biweekly paychecks, she said, though she makes too much to qualify for income-based housing. She’s also taking care of three children. She said Salisbury needs more options for single families and those who are “in between,” meaning they don’t earn enough to endure rent increases but make too much for income-based housing.

“They can’t afford the cost of rent that’s being promoted but yet make too much for income-based (housing),” Doby said.

Whether it be supply chain issues, lack of available property or the 2008 economic crisis that led to a recession, local residents, Realtors and others involved in the housing market worry the challenges facing the housing market today will price out potential homebuyers, especially those who may currently be renters but are seeking a home for the first time.

The latest cost-of-living survey compiled by Catawba College students at the Ketner School of Business shows Salisbury received a composite score of 92, placing it eight points below the national mean. That’s lower than Charlotte’s rate of 94.8, Raleigh’s rate of 92.8 and Winston-Salem’s rate of 95.6. Data show the average price of a 950-square-foot, two bedroom, unfurnished apartment in Salisbury was $954, which was lower than in Charlotte, Winston-Salem, Raleigh and Asheville.

According to online apartment rental site Zumper, its National Rent Index showed a 12% year-over-year increase in the median one-bedroom rent rate across the nation from January 2021.

Dan Waggoner of Waggoner Realty, which is both a property management company and real estate agency, said the current housing market has resulted in “major difficulties” for his company. Waggoner said these issues stem to a crisis older than the current pandemic: the 2008 recession. While building ceased at that time, the market looked promising up until the last year, he said. Now, it’s difficult to find available property across the state and rental rates have increased because the value of properties has increased.

Waggoner said he receives calls daily asking about housing options, which the company only has two of at this time. Years ago, the company would have as many as 20 options open at one time.

More housing has to be built, he said, and that’s starting to pick up. But the rising cost of construction poses another challenge. Additionally, developers are seeking infield lots, or undeveloped lots where construction never happened, because there’s a demand for more rental properties and single-family housing.

Waggoner said potential homebuyers are putting in bids way over asking price and still not being accepted because of the limited options.

Lindsey Modica said she moved to Salisbury from Raleigh during the pandemic in June 2020. She was surprised to find the rent rates comparable to those of Raleigh.

“I thought moving here would be cheaper. That’s absolutely not true,” Modica said. “Rent in Salisbury is almost higher than Raleigh.”

For now, Modica said she’s living in a camper in the area until she can move elsewhere.

“Salisbury is not Raleigh, Charlotte or Chapel Hill,” Modica said. “They are able to charge that much for rent because of the location and many options of work and fun stuff to do, plus most allow pets.”

The Salisbury Community Development Corporation is a nonprofit that focuses on providing affordable housing, encouraging stable communities and improving home ownership opportunities for low- to moderate-income families. The corporation is currently constructing two homes, one on the 500 block of Park Avenue and another on the 600 block of West Cemetery Street. Those homes will be sold to families earning below 80% of the area’s median income, which was just short of $42,000 per year as of 2019.

The homes are generally sold at market rate, but the CDC receives $50,000 each year in federal funding to assist first-time homebuyers with down payment assistance. That federal funding also caps the maximum asking price they can charge.

Salisbury CDC Executive Director Chanaka Yatawara said he was shocked to find a dozen new townhomes being constructed on West Cemetery listed on Zillow for more than $250,000.

“I’m shocked,” Yatawara said. “I feel like we’re in Charlotte.”

Though the CDC focuses on those who are low- to moderate-income earners, Yatawara said the market still plays a big role in the work they do. It’s hard for homebuyers to purchase homes when multiple bids are put in above asking price but still not accepted, he said. And the rising cost of construction affects the CDC’s projects as they try to base their asking price on the construction costs.

But the current low interest rates have driven up the prices as well, Yatawara said.

“Otherwise, they’re going to move out of Salisbury,” Yatawara said. “The city needs more young people to be able to move in and set roots here.”

Salisbury resident George W. Benson, who is on the Rowan County Board of Elections, said he’s experienced his monthly rent increase by about $100. Salisbury is in need of more housing for older adults age 55 and older who are on fixed, limited incomes, he said.

The city estimates about 500 new housing units this year, including about 160 confirmed affordable units and the potential for another 70. At least 270 market-rate units will be available, with the potential for hundreds more. The outlook past 2022 could include 1,600 additional housing units, which would be a mix of low-income and market-rate housing. In December, the city approved a project to redevelop a former Ford dealership on South Main Street to provide 64 intergenerational affordable housing units by 2023.