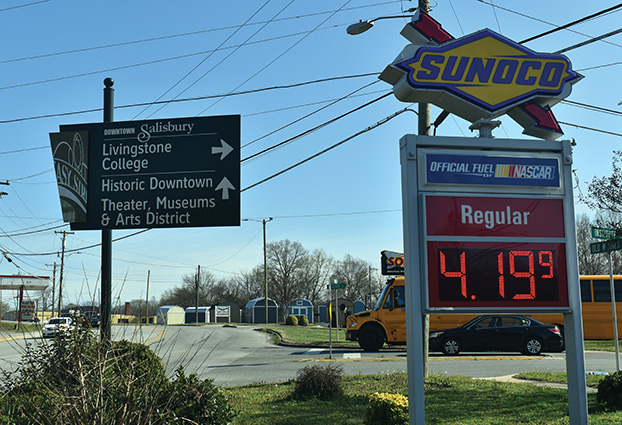 Regular unleaded gas at many pumps in Salisbury reached $4.19 per gallon on Friday afternoon as prices surge across the country. Ben Stansell/Salisbury Post

SALISBURY — Steve Sifford has been in the gas station business for 40 years, but he’s never seen prices fluctuate like they are currently.

Sifford, who owns Sifford Oil Company in Rockwell, started working with his father around 1980 and inherited the business in the mid 1990s. Even when gas prices spiked in 2008, he doesn’t remember the market ever being as unpredictable as it has been over the past few weeks.

“(Prices) are terrible right now,” Sifford said. “I haven’t seen them change as much as they are right now.”

Gas prices across the country have increased significantly in the past month, with the national average for regular unleaded hovering around $4.30 as of Friday afternoon, according to AAA.

While North Carolina’s fuel prices have remained lower than some places on the West Coast and in the Northeast, the state’s average price of $4.19 for regular unleaded set a new record high on Friday. It’s also almost $1 higher than the average price was a month ago. Diesel set a new record Friday when it reached $5.12 per gallon, according to AAA. In Rowan County, the average gallon of regular unleaded cost $4.20 and diesel was over $5 per gallon.

The price hike comes in the wake of Russia’s invasion of Ukraine. Last week, President Joe Biden announced a ban on oil imported from Russia. While the United States does not depend on Russia for a large portion of its supply, Russia is one of top oil-producing countries in the world and its status impacts the global market.

Fuel costs are increasing as Americans are already dealing with record high inflation. In February, the consumer price index rose 0.8% and was up 7.9% over a year prior, according to the Labor Department. Treasury Secretary Janet Yellen said in a television interview last week that she expects consumers to see “uncomfortably high inflation” for another year.

Sifford said the steep gas prices will be passed on to the consumer beyond the fuel pump, which could contribute to even higher costs for goods and services. For example, the company who delivers tires to his station implements a surcharge on each delivery when gas goes above $4. The ride share service Uber on Friday implemented a surcharge due to fuel costs.

James Meacham, head of the Rowan County Tourism Development Authority, said he is starting to see gas prices impact the local tourism industry. When gas prices soar, Meacham said “transient, leisure travelers” are the first group to change their behavior. He describes those people as folks who are “traveling to travel.” They might stay the night in Rowan County on the way to another destination.

“Some of your more price-sensitive travelers that maybe travel on the weekends will start to pull back,” Meacham said.

Meacham said the cost of diesel fuel will likely impact the area’s farmers, who will rely on heavy machinery such as tractors to harvest their produce in the coming months. As a result, the cost of goods at the local farmer’s market could increase and the agritourism industry could be affected.

The hike in gas prices comes as Rowan County Tourism is seeing travel return to pre-pandemic levels. Since June, Meacham said hotel occupancy rates have consistently surpassed 72%, meaning that about 8,4000 people have been staying the night in Rowan County each week. Room rates have also risen to almost $100. Those are record numbers, Meacham said. Meacham doesn’t expect the gas prices to curtail occupancy rates in the near future, but will continue to monitor them on a weekly basis.

In response to the current price of fuel, Meacham said the county has started to shift its marketing strategy to target people living closer to Rowan County.

“We’re starting to emphasize the value in terms of minimal transportation costs, especially for day trippers who visit on the weekends,” Meacham said.

If prices continue to remain over $4 for a sustained period, Meacham expects more people to pull back on eating out, traveling and other leisure activities.

A survey conducted by AAA last month found that 59% of people said they would make changes to their driving habits or lifestyle if the cost of gas rose to $4 per gallon. If gas were to reach $5, which it already has in some parts of the United States, 75% of respondents said they would need to adjust their lifestyle to offset the spike at the pump.

The rise in gas prices, Sifford said, has not made a noticeable difference in consumer behavior at his station. More customers have brought up the subject while paying for gas inside the store.

Sifford said the prices per gallon of oil are changing significantly from day to day, which means he has to be cautious when placing an order to ensure he gets the best price possible. He’s not sure when or if prices will go back down, but he’s trying to remain optimistic.

“I’m hoping they come back down just like they went up, within a couple weeks,” Sifford said.

AAA has a list of tips for drivers looking to be slightly more fuel efficient. The company says to drive the speed limit, avoid fast starts and hard acceleration and use cruise control when possible to maintain a steady speed. Additionally, the company encourages drivers to have their cars repaired as soon as the “check engine” light comes on and to keep their tires properly inflated.

‘So much to be proud of’ — Salisbury girls…