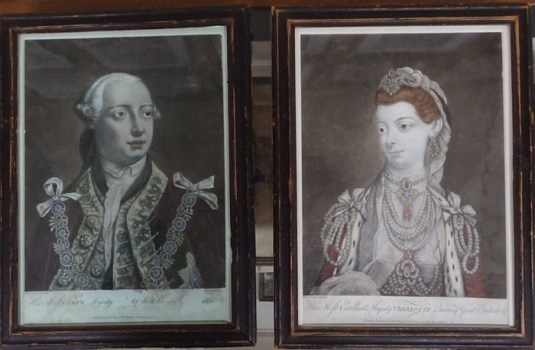 The mezzotint portraits of King George III and Queen Charlotte now reside in the museum at Thyatira Presbyterian Church at Mill Brook. 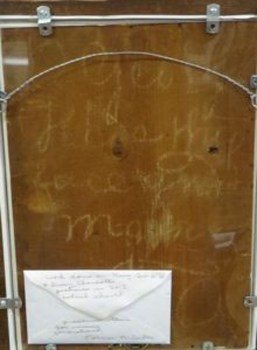 The back of the portrait of George III has the words, “Oh George, hide thy face and mourn.” 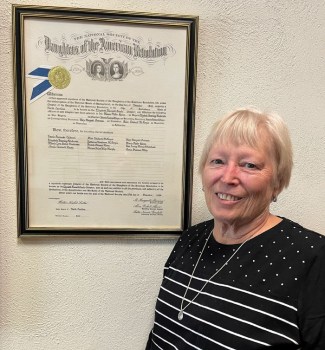 Sandy Czuba, Elizabeth Maxwell Steele Chapter of the National Society Daughters of the American Revolution Regent, stands next to the 1898 charter for the chapter. The charter and other memorabilia are in the DAR Room at the Rowan Museum. 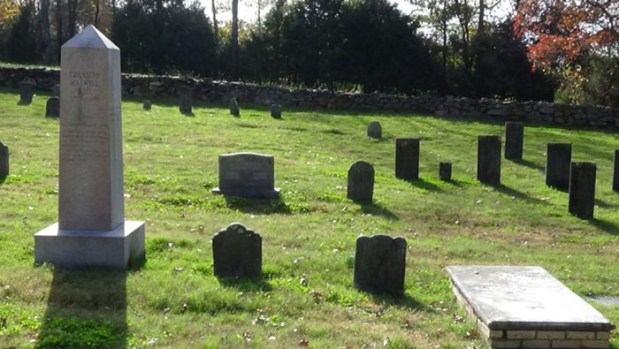 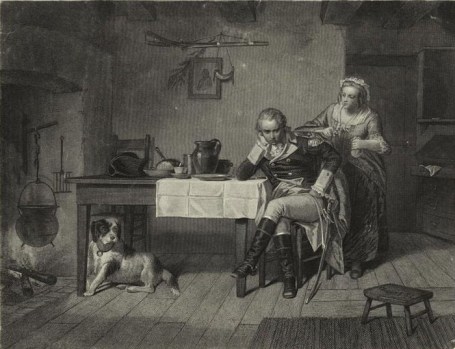 SALISBURY — The 1850 Rowan County Courthouse — now the Rowan County Museum — was not the first important building on the corner of Main and Council streets. Almost 100 years earlier, a tavern stood on that site. That public house played a significant role in the history of Salisbury and its owner was one of the town’s most influential women before, during and after the Revolutionary War.

Although Steele was one of Salisbury’s wealthiest women and largest landowners during the Colonial era, those accomplishments were not what secured her place in the history books. Rather it was a singular event on the morning of Feb. 2, 1781.

That day, Revolutionary War General Nathaniel Greene made his way alone to the Steele Tavern, Salisbury’s best licensed public house. He was greeted by Dr. Joseph Read (also Reed), a visiting military surgeon who was acquainted with the general. Salisbury’s many colonial taverns were not only public bars for drinking and eating, but some also served as a general store, a home for the owners, a hotel, post office, community meeting place and for Dr. Read, a make-shift office.

Greene’s troops and the patriot’s cause were in desperate straits, Greene told Dr. Read and Mrs. Steele. The British were in control of Georgia and South Carolina and the previous day they had launched a surprise attack in Mecklenburg County that killed several dozen patriots. After serving Greene breakfast, Steele, who was well informed about the war’s victories and defeats, gave him two sacks of gold and silver coins assuring him that he needed the money more than she did. Historians differ on the value of the contribution. Estimates range from two years of the tavern’s profits to Steele’s life savings.

Greene gratefully accepted the gift and then noticed the mezzotint portraits of King George III and Queen Charlotte on the tavern wall. He took down the king’s picture and with a coal from the hearth or chalk wrote a defiant note to his enemy: “Oh George, hide thy face and mourn.” Greene rehung the picture but with the king’s face to the wall.

In the years that followed, neither General Greene nor Elizabeth Maxwell Steele wrote about the incident. The same month she met General Greene, Steele wrote a letter to a relative in Pennsylvania stating that British troops had pillaged her tavern and stole her household possessions, cattle and horses. She said nothing about General Greene’s visit.

It took an entire generation for the story to evolve from word of mouth to print, said George Raynor in a 1985 Salisbury Post article. The 1822 biography of General Greene by William Johnson related the incident in exquisite detail including bits of the conversation between Steele, Greene and Read. From that date forward, the meeting, donation and notation to King George have been included in numerous books, magazines and newspapers. In some publications, doubt lingered, and editors attached a warning that the incident may be legend, myth, fable or folklore.

None of that stopped the people of Salisbury and others from lauding our most famous Colonial female entrepreneur.

In 1791, two months after her death, the Fayetteville Gazette referred to the late Mrs. Steele as someone “distinguished during the war as a friend to her country.”

In 1796, President George Washington appointed John Steele, the son of Elizabeth and William Steele, comptroller of the United States. Earlier in his career, John served as a local assessor and judge and then as a state representative. His 1799-1801 house, the centerpiece of Lombardy Plantation, is the oldest in Salisbury. Preservationist Ed Clement restored the house from 1977 to 1983.

In 1856, American artist Alonzo Chappel created an engraving titled “Female Patriotism-Mrs. Steele and General Green.” His engraving was reprinted in J. A. Spencer’s 1876 book, “A History of the United States.” An original engraving of the scene is part of the collection of the Gilder Lehrman Institute of American History in New York City.

In 1898, 12 Salisbury women who traced their ancestry to the Revolutionary War organized North Carolina’s second chapter of the Daughters of the American Revolution (DAR). They named their chapter in honor of Elizabeth Maxwell Steele. The chapter remains active 134 years later with 155 members and a long list of service projects benefiting Rowan Salisbury Schools and the W.G. Hefner Veterans Administration Medical Center.

In 1911, for the 130th anniversary of the meeting with General Greene, the Salisbury DAR chapter commissioned a plaque in her memory. That plaque is now affixed to the front façade of the 1850 Courthouse.

In 1948, the Salisbury Daughters erected a new headstone for their patron in the cemetery at Thyatira Presbyterian Church at Mill Bridge. The “Immortal Patriotism” stone stands near the graves of Robert Gillespie and William Steele, her two husbands.

In 1977, the mezzotint portraits of King George II and Queen Charlotte that hung in the Steele Tavern were found in an art gallery in Palm Springs, California. Rowan County preservationists Pauline and Locke Neel purchased the mezzotints for $1,500. They then paid to have the Thyatira Heritage Museum built behind the church as a repository for local artifacts and the two portraits.

In 2003, Cory Joe Stewart received a master’s degree in history from Appalachian State University. His thesis detailed the life of Elizabeth Maxwell Steele as one of Salisbury’s wealthiest citizens and largest landowners. He concluded that regardless of the truth of the Green incident, “her wealth and stature made her competitive with any businessman in the region.”

In 2019, the National Society of the Daughters of the American Revolution informed the local Salisbury chapter that they were considering “red lining” Steele and removing her name from the chapter. The national group apparently believed the Greene story to be folklore. That affront caused one of the Daughters to redouble her research. What she found convinced the national office to allow the local chapter to keep is historic name. What was the evidence? Later this spring, the local Daughters of the American Revolution will reveal new details about the Widow Steele’s gift to the patriot’s cause. The pandemic delayed the announcement until this year.

Though many women have been left out of our history, Elizabeth Maxwell Steele continues to make headlines!