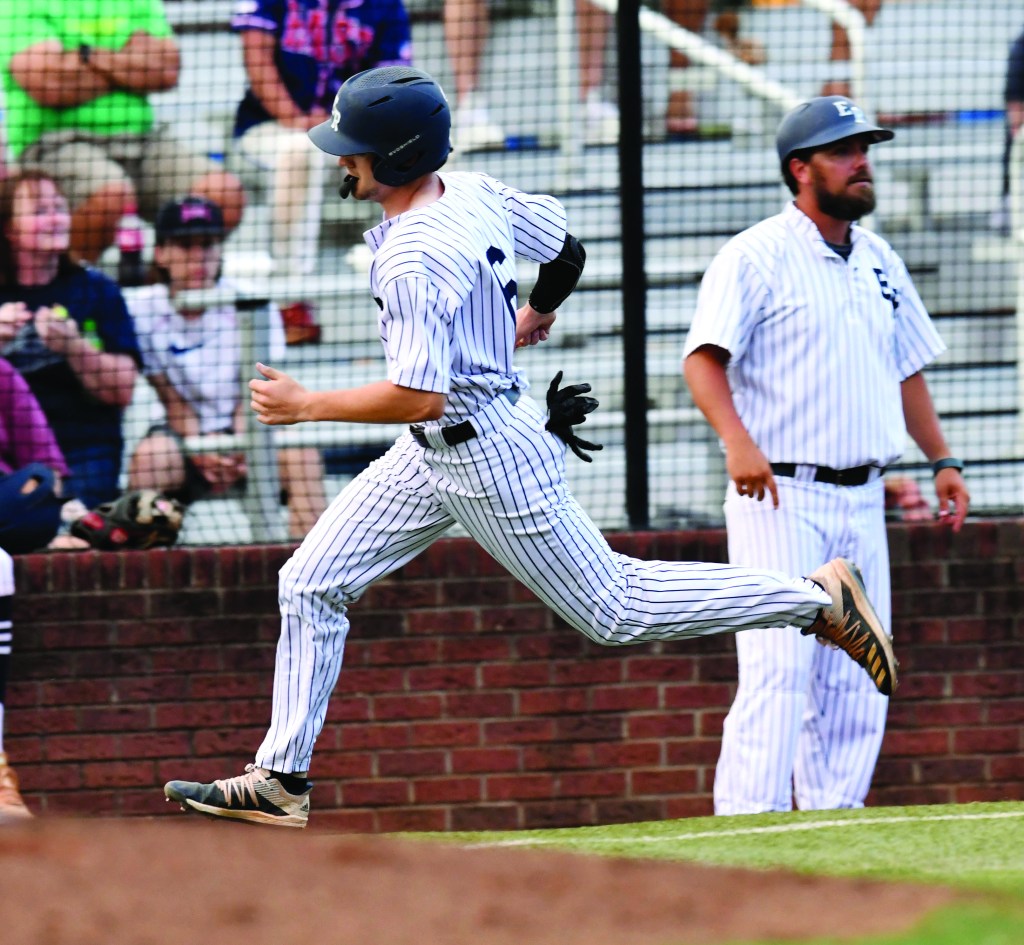 Griffin Warden led off the bottom of the ninth with a home run to give East Rowan a 6-5 win against Piedmont on Friday at Staton Field.

“A no doubter,” gushed East head coach Brett Hatley. “When he hit it, Staton Field just exploded. You can feel the excitement here, and what a great win for our guys. Piedmont can really swing it.”

Sophomore Nate Hayworth did most of the pitching, while sophomore Logan Dyer pitched the top of the ninth and got the win.

Sophomore shortstop Cobb Hightower made several fine defensive plays and stayed hot at the plate for the Mustangs (5-0).

“We’ve played some really good teams early,” Hatley said. “We found The Burlington School as a last-minute replacement for Sun Valley on Thursday and they put a 6-foot-5 lefty (Arkansas commit Tucker Holland)  on the mound throwing 93. That was a tough game, too, but we did enough to win behind Cam Padgett. It’s been great preparation for the South Piedmont Conference.”

The Cougars (2-2) got two hits and two RBIs from Hunter Burris.

Salisbury used a six-run second inning to win 11-5 against North Hills on Friday.

Aiden Mowery was 2-for-2 with two RBIs. Reed Fugle and Kaleb Burleyson had two RBIs each for the Hornets (3-2).

Hank Webb pitched the first three innings and struck out six. Cole Price was strong in the fourth and fifth, and three more Hornet hurlers finished up.

Davie County pounded out an 11-3 Central Piedmont Conference win against R.J. Reynolds for a season sweep.

Anthony Umbach and Caden Heyward swung big bats for the Bulls, who beat the Wonders (1-3, 0-2) for the second time this week.

West Rowan (2-2) to Alexander Central for the second time this week.

The Cougars banged out 14 hits and outscored the Falcons 11-6.

Alexander Central led 4-1 after three innings. West tried to rally in the late innings, but the Cougars kept tacking on runs.

For boys, Salisbury’s Juke Harris is on the second team, while Cam Stout made the third team.

Liberty Schroeder continued to swing a hot bat for the Mustangs (3-0).

Carson lost to Piedmont 5-2 on Friday.

The Cougars (0-3) got a homer from Cora Atwell.

Carson got 10 hits, with Landry Stewart, Brooklynn Davis and Allie Burns getting two each.

Carmen Thomas had three hits for the Raiders.

Kristin Hammonds made seven saves for the Falcons.