‘It would mean a lot’: Local artisan competing for chance at $25,000 in online contest 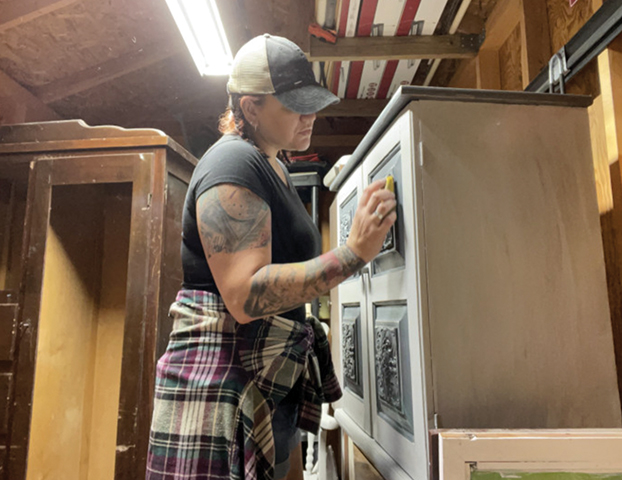 Angela Mills focuses on a piece in her workshop. The local craftswoman is competing in an online competition called DIY Hero that promotes people who make things, or in Mills' case, make old things new. Photo submitted.

SALISBURY — Days before Angela Mills was set to open her showroom and shop last summer, she walked into her business to find it almost unrecognizable.

An overnight electric fire had sparked, ruining furniture, damaging a wall and covering almost everything in a layer of black soot. Miraculously, the blaze didn’t destroy the single-wide trailer. But it did force Mills to delay the opening of Farmhouse Furniture and Rustic Renovations for several months.

The local craftswoman has emerged from the ashes and is now competing for her chance at both fame and a small fortune. Mills is a contestant in DIY Hero, an online contest that highlights talented makers across the country. The winner of the competition will land a feature in Make magazine and will take home $25,000.

Mills started refurbishing old pieces of furniture several years ago, but didn’t turn her passion into a business until last year. She launched Farmhouse Furniture and Rustic Renovations after the death of her father-in-law, Jerry Mills, who always encouraged her to pursue her dream of owning her own business.

Not only does Mills find and replenish desks, drawers and tables, but she also takes on commissioned work from people who have an old piece they’d like to see restored.

After selling her goods online, Mills purchased a trailer behind her paternal father’s house and transformed it into a showroom. Mills still works on furniture in her father in law’s shed, but the showroom gives people a place to peruse her completed pieces. Mills was in the final stages of preparing the shop last June when the fire dashed her plans of a grand opening event. The fire was devastating, but Mills knows it could’ve been worse.

“The fire marshal came out and he was like, ‘I’m not going to lie to you honey, I’m not sure how this place is still standing,’” Mills said.

She credits her guardian angel with keeping the trailer from completely burning up.

“Somebody put that fire out for me,” Mills said. “I still believe to this day that my father-in-law watches over me.”

Mills called a restoration company to get a quote for how much it would cost to fix the shop. The price was staggering. So, she decided to take matters into her own hands. Mills spent a few months regrouping before renovating the shop herself, putting in new flooring and wiping away the ash.

“I almost gave up but I knew I couldn’t,” Mills said. “I knew that I started this for a reason and I was going to finish it.” 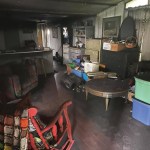 What Farmhouse Furniture and Rustic Renovations looked like after an electrical fire. Photo submitted. 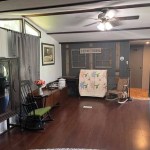 Mills eventually returned the trailer to its previous appearance. She opened the showroom in November and has even added a small general store, offering locally made products. Business has been going well, she said, but winning DIY Hero could take things to another level.

It was actually Mills’ husband, Jason, who entered her in the online competition. She didn’t even know he submitted her name until she received an email about a week later notifying her that she’d been chosen.

“I was just like, what is this? (Jason) explained it to me and I put my profile in there and tried to be as honest as possible,” Mills said.

The competition is being hosted by Mark Bowe, who hosts Barnwood Builders on the DIY Network, which is transitioning to the Magnolia Network.

Voting for the competition started on Tuesday. Anyone can vote in the competition by visiting diyhero.org/2022/angela-mills. A Facebook account is required and people can vote for free once per day. The field of competitors will be narrowed down on March 24. There is also an option to give a candidate extra support by making a donation to the American Lung Association.

If she wins, Mills said she would put most of the money back into her business.

“The money would help my business grow because I don’t have a whole lot of room,” Mills said. “My biggest dream is to have a storefront for my business. It would mean a lot.”

Winning the competition also would be validation.

“Honestly, I think it would prove to me that I do a good job,” Mills said.

As of Thursday, Mills was in second place out of almost 50 contestants in her division.

More information about Farmhouse Furniture and Rustic Renovations can be found online at farmhousefurnitureandrusticrenovations.com. The showroom is located at 513 Cox Road, not far from Dan Nicholas Park.