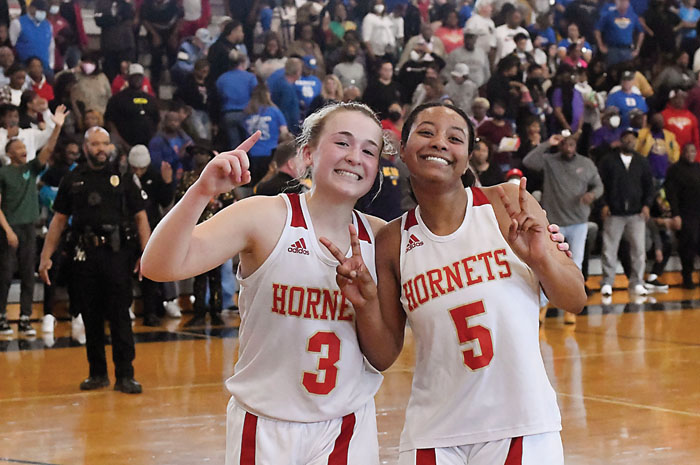 Salisbury’s Rachel McCullough, left, and Kyla Bryant are hoping to flash the ‘V’ for victory one more time Saturday. File photo by Wayne Hinshaw for the Salisbury Post

SALISBURY — Farmville Central conjures up images of Iowa and Indiana cornfields, but it’s about 14 miles west of Greenville, N.C.

The town is small, about 5,000 people. The school is small also, roughly 750 students, about 150 fewer than Salisbury High.

But Farmville Central (27-4) is a basketball school with a powerful girls program, and the Jaguars will provide strong opposition Saturday for the SHS Hornets (27-1) in the 2A state championship game.

This is a doubleheader for Farmville Central, as the Jaguar boys will take on Robinson following the girls game. That means a throng of Farmville Central fans will be making the 100-mile trip to Chapel Hill.

The programs have clashed before on the biggest stage.

The epic 2006 game at Reynolds Coliseum between the programs provided the pinnacle for Farmville girls hoops history and arguably the toughest loss in the history of the Salisbury program.

Farmville Central made an improbable rally in the final seconds of regulation, sent the game to overtime, and won 56-55 in the extra period. That Salisbury team was coached by Jennifer Shoaf and led by seniors Ashley Watkins and Saybah Sammy.

That 2006 thriller was the only time Farmville Central’s girls have won a state title game on the court. They also were declared co-state champs in 2020 by the NCHSAA when COVID fears stopped that season following the regional finals. That was the same season that a young Salisbury squad lost to Newton-Conover in the West Region final.

Farmville Central has won the 2A East Regional four straight seasons, largely because of an amazing player.

Amiya Joyner is considered the most important recruit in East Carolina history. The four-star phenom could have gone to UNC or Auburn or anywhere else, but the Pirates talked her into staying home. She’s rated as one of the top 15 forwards in the country.

Joyner normally is listed at 6-foot-2, but she appears to be 6-foot-3. She’s left-handed, she’s explosive, she’s strong and she has guard skills.

Joyner averages 18.2 points and 12.4 rebounds and has been able to turn it up when necessary. Roanoke Rapids provided the most challenging playoff game for Farmville Central to get to this point. In that one, Joyner had 22 points, 23 rebounds and eight blocks.

“Farmville Central is a team we’ve kept an eye on all year and have been looking at all year, just in case,” Salisbury head coach Lakai Brice said. “Amiya Joyner and (wing) Journee McDaniel are excellent players, but you can’t just worry about those two. Their supporting cast is good.”

McDaniel averages 15.7 points and 8.4 rebounds. Kamiyah Wooten and Jahnyah Willoughby also have had their big nights.

If you’re wondering how Farmville Central lost four, the setbacks came against much larger schools — Athens Drive and Rocky Mount as the season tipped off and Apex Friendship and Garner in a Christmas tourney.

The Jaguars have won their last 17. Head coach Hollis Harper credits that tough early schedule with preparing his team to do big things.

“This is a team that picks each other up and stays together and it’s a team willing to play hard on the defensive end,” Harper said. “Defense is where we’ve made the most improvement during the season.”

For Brice, Salisbury’s return to being a factor on the state level has been gratifying. This is her ninth season. In the last four, the Hornets are 95-10. They’ve won 26 in a row since a loss to 4A Apex Friendship, a team led by five-star Stanford recruit Indya Nivar.

This will be the first state championship game for the Hornets since they rolled to a 2A three-peat in 2011. They were a feared program statewide in those days. Salisbury was 85-4 in those three seasons.

“It’s wonderful having Coach Mitchell because he’s got stories about all those great teams and players and our girls have learned a lot of the history of the program,” Brice said. “Our girls see those pictures hanging on the wall every day when they come to practice. It’s been motivation for them to keep working as hard as they do. They want to be remembered.”

Salisbury doesn’t have a monumental player like Joyner, but the Hornets have some good ones. They play tough defense and they play together and they’ve got some depth.

That provides some confidence.

Ticket sales are electronic through GoFan.

Rachel McCullough, Sr. — Outside shooter and No. 2 scorer, averages 13.4 points, close to 1,200 career points, made a huge three-point play in Saturday’s game.

Kiki Walker, Sr. — Guard transferred from Pennsylvania and has provided speed and length off the bench.

Kyla Bryant, Jr. — Brice’s daughter is a point guard with skills, shooting range and a cool head. She’s the engine of the Hornets. She averages 17.3 points and has surpassed 1,100 career points.

Jamecia Huntley, Jr. — The Hornets’ most athletic player and best defender. The springy forward averages 9.3 points, but is capable of a lot more than that in a big game.

Haley Dalton, Jr. — The long-armed 6-footer is a shot-blocker.

Icesis Nwafor, Jr. — Forward fits in well in any combination, glue player with some offensive skills.

MaKayla Noble, So. — Skilled young player at 5-foot-11 and a future star. Her passing and scoring ability could be a key factor. She’ll be off the bench quickly if the Hornets need an offensive spark.

Shamya Arnold, So. — Young guard has shown flashes and is a big part of the future.