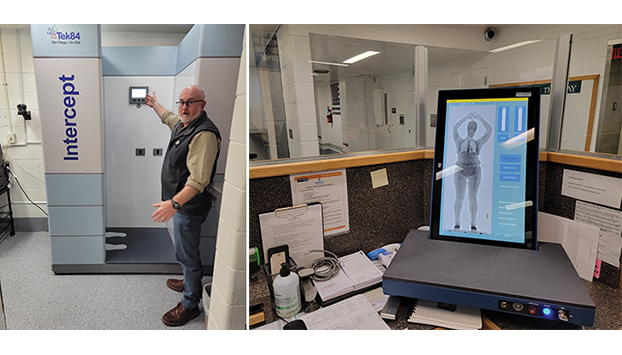 Josh Bergeron / Salisbury Post - Left, Capt. Greg Hannold, who supervises the jail, talks about a new piece of equipment staff used to x-ray new inmates and scan for contraband such as drugs. Right, an x-ray image of an inmate who was booked into the Rowan County Detention Center is displayed on a console at the front of the facility.

SALISBURY — With a new piece of equipment, Rowan County Detention Center officials hope to intercept drugs and other contraband before they find a way into the facility.

At cost of $144,000, the scanner, a Tek 84 Intercept, is a 21st-century update to a process that’s mostly involved pat-down searches or asking people to squat and cough. The machine scans incoming inmates with an X-ray and takes their temperature in an attempt to prevent illness from spreading inside the facility.

“Prevention is 90% of my goal, to prevent one person from bringing illegal narcotics into the detention center, to prevent one overdose or two,” said Capt. Greg Hannold, who supervises the jail. “It can prevent a death from happening in the jail. … We don’t work off of charges. We work on trying to keep people in here safe.”

The scanner works because detention center officers detect anomalies inside of a person’s body, including cavities or gaps in unusual locations.

Hannold said jail staff used a X-ray scanner on 10 inmates Feb. 28 before finding a bag of heroin the 11th inmate tried to hide inside of her body. Another inmate, Glenn Douglas Rogers, 31, was charged with bringing a drugs onto jail premises Tuesday.