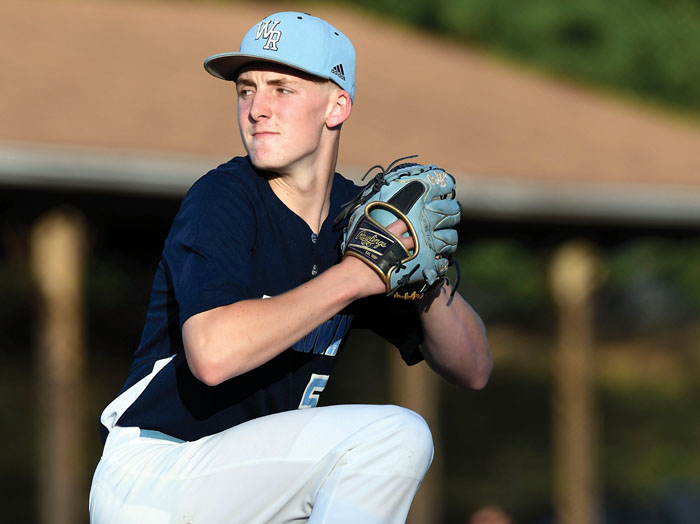 MOUNT ULLA —  Peanuts, crackerjacks and popcorn were on the menu in the West Rowan media center, and the glass doors were opened wide welcome in 80 degrees of sunshine.

It wasn’t hard to feel baseball in the air at West Rowan last week, as head coach Seth Graham beamed with pride and the Falcons’ senior pitching standouts made things official with local college programs.

Casey Gouge, who has a D-I head and left arm, could be a real steal for Catawba College’s perennially stout program.

Right-hander Jake Blevins still has some maturing to do physically, but he’s already a professor of pitching and he has a chance to be good at Pfeiffer University.

“There’s a lot of similarities with these two guys,” Graham said. “Both of them came into the program needing to get bigger and stronger, but they set the goal of becoming college pitchers. It’s not like they’re giants now, but they’ve come a long way.”

Blevins was 5-fo0t-7, 130 pounds three years ago, and was just about done with baseball after a rough freshman season.

“I didn’t do well and I was down,” Blevins said. “But I played for the CBA Copperheads organization that summer and had the time of my life. That’s when I decided I wanted to play baseball as long as I could.”

The COVID shutdown erased Blevins’ sophomore season at West, but he emerged as West’s No. 2 starter as a junior. He was 3-3 with a 1.33 ERA. 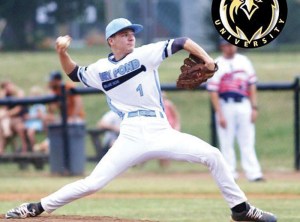 “The most memorable game for me was South Iredell,” Blevins said. “Tie game and I took the mound in the seventh with the bases loaded and struck out two guys. Then we walked it off in the bottom of the inning.”

Blevins’ favorite player and role model is Hall of Fame pitcher Greg Maddux. Blevins has become a youthful master of the the pitch that made Maddux close to unhittable.

Blevins throws the Maddux two-seam fastball 80 to 90% of the time. It not only sinks, it has serious run on it. It takes a right turn while it’s dropping.

“The biggest thing was finding the right grip, so I could get the movement I wanted, but still have control of it,” Blevins said. “My arm angle is naturally three-quarters. That helps some, too.”

Blevins mixes in occasional changeups and slurves. His slurve looks like a curve, but it breaks more like a slider, more horizontal than vertical.

Blevins has grown some to 5-foot-10, 155 pounds. He’s still slight as pitchers go and his peak velocity is still mid-70s, but he’s headed in the right direction with his unusual pitching arsenal.

“Jake makes hitters uncomfortable with the movement he gets and he does a good job of hiding the ball,” Graham said. “In our scrimmage at Newman Park, Casey was overpowering people, but Jake was getting even more bad swings than Casey was. Jake is hard to hit and if he gets another 4 or 5 mph in college, he could be special.”

Blevins said Pfeiffer was one of the Division III schools he had targeted. His visit to Misenheimer confirmed that’s where he wanted to be.

He’s gotten off to a spectacular start in the 2022 season.

Blevins is a good outfielder. Playing right field, he made a diving catch in right-center to end the game and preserve a 3-2 West win on opening night.

He started West’s second game on the bump and allowed only one hit and one walk in five shutout innings against Pine Lake Prep. He struck out seven.

“Jake goes out there with a plan every time,” Graham said. “He knows how to work through a batting order.”

His velocity is increasing. Graham expected him to touch the mid-80s in West’s scrimmage at Newman Park, but he was throwing some 87s and 88s. That surprised Gouge and Graham.

Gouge learned to paint corners young, when he had much less zip. He’s a polished pitcher for a high school kid.

What makes him special are his poise and control. He is a supreme locator of fastballs, who rarely gets anything in the middle of the plate. His curve and changeup (usually around 77 mph) are excellent secondary pitches. His changeup gets him weak contact from hitters looking for fastballs on 2-and-2, 3-and-2 and 3-and-1 counts.

“That junior season built a lot of confidence,” Gouge said.

“He pounded the strike zone, very efficient,” Graham said. “Casey reminds me of (former Lake Norman, Mooresville Legion and Catawba lefty) Nick Lomascolo at that age. I had a chance to help coach Nick, and a lot of people remember how good Nick was at Catawba.”

Gouge had committed during the summer of 2021 to the Naval Academy, but he had a change of heart after visiting.

“They’d changed pitching coaches from when they first recruited me, and I just didn’t feel comfortable,” Gouge said. “The fit wasn’t right there.”

Gouge pitched for Catawba head coach Jim Gantt in the COVID summer of 2020 when Gantt was coaching the Rowan County NC3 team.

There’s been a mutual respect since then, and Gantt was thrilled to get a verbal pledge from Gouge after he de-committed from Navy.

That’s a verbal that became a signature last week.

Gouge is a baseball player. When he’s not pitching, he’ll be stationed at first base or right field for the Falcons.

He’s had key hits in West’s first two games, including a two-run double.

“He’s really worked hard at it, and we’ve got him leading off,” Graham said. “He’s our best hitter.”