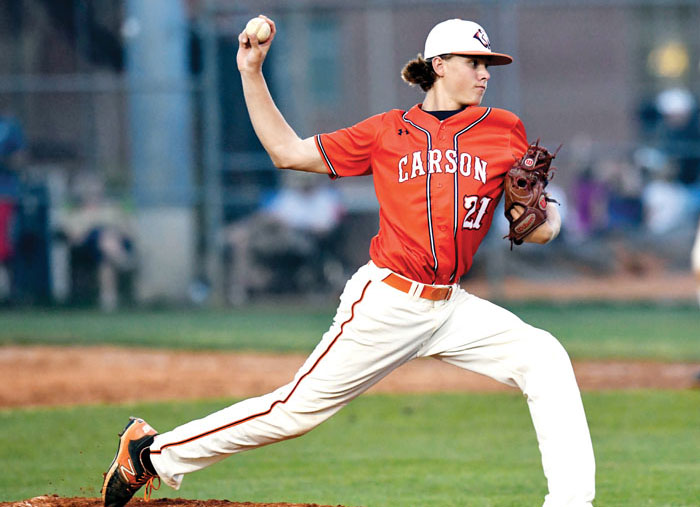 Carson pitcher Hayden Simmerson fires to the plate during a game against East Rowan last season. photo by Wayne Hinshaw, for the Salisbury Post

Fifth in a series of reports on local baseball teams …

CHINA GROVE — Carson DH Jordan King went 8-for-10 the first week of the season, while Emory Taylor, Hunter Burris and Hayden Simmerson were nearly as hot at the plate.

“With the bats, we’ve been able to do some things we haven’t done for a while,” Carson head coach Chris Cauble said. “But we’ve got to field it cleaner.”

East Rowan and South Rowan have the D-I signers and commits. West Rowan has the 1-2 pitching punch of seniors Casey Gouge and Jake Blevins. A Northwest Cabarrus hurler fired a perfect game on Saturday. Lake Norman Charter will put an N.C. State commit on the hill. Central Cabarrus and Concord went undefeated in the opening week.

South Piedmont Conference baseball obviously is going to be something else.

So what do the Cougars have?

For one thing, they’re used to winning. They basically win every year. They were conference co-champs in 2021, sharing the title with an East Rowan squad that boasted three big-time hurlers.

King can swing, and the Cougars should be as good up the middle as 90% of high school teams with shortstop Taylor, second baseman Burris and catcher Cameron Burleyson.

They also have a stud pitcher in Simmerson, who slings fastballs in the upper 80s.

If the Cougars can make the plays and the arms come through behind Simmerson, they could maintain their place as one of the top programs in the area.

“No one is talking about Carson and everyone forgets about Carson,” Cauble said. “We’re in a very good baseball league, a lot of stud pitchers,  but I believe we can be in the mix at the end.”

Simmerson is a sturdy 6-foot-3 junior right-hander and probably is the county’s most talented uncommitted player in the 2023 class.

“Hopefully, he’ll take some strides and be even better than he was last year,” Cauble said. “He’s our go-to arm.”

Cauble is counting on lefties Mikey Beasley and Casey Crawford to be the next two guys. Beasley has been working his way up, paying his dues with Carson’s jayvee and Junior Legion teams. Crawford is a transfer from Mallard Creek. He’s 6-foot-4 and has a big curveball.

Burleyson is behind the plate, with Connor Rayfield and Cody Russell next in line.

Burleyson is an athlete and made the All-South Piedmont Conference basketball team. He hit .316 in the 2021 half-season and he’s even better on defense than offense.

“He’s a tremendous defensive asset and runs our team,” Cauble said. “We’re expecting bigger things from him at the plate. He was a contact guy last season, but he’ll hit higher in the lineup and he’s capable of giving us gap power and RBIs.”

Carson’s offense will need that. It took a hit from graduation. Dylan Driver and CP Pyle, the extra-fast guys who scored the runs, are gone. Also gone are the bats that drove in the runs — TJ Jones, Caden Hudson and Jake Harris.

Half the infield is set. Taylor and Burris are fine, multi-sport athletes.They can use the gloves, they’ll turn some twin killings, and they’ll run the bases well. Taylor hit .343 last season. Burris batted .294.

Jacob Efird, who had four hits against North Rowan, provides the depth.

Simmerson’s big bat will be needed in the lineup somewhere. King will be a fixture at DH, so that puts Simmerson at shortstop when Taylor pitches and at one of the infield corners when Beasley or Crawford pitches.

Other third base hopefuls are Safrit and Will Bradshaw.  The candidates to play first base are Garrison Collins, Rayfield and Russell.

“Those positions aren’t set and who plays is going to depend on who’s hitting,” Cauble said. ‘King can play first, but he’ll usually be the DH. We’re counting on him for a lot of RBIs.”

Coe will be an outfield starter, although where he plays will depend on which fly-chasers join him out there.

Austin Efird has been swinging the bat well and will probably be stationed in right field or left field.

Sophomore Keegan Barger has the speed to be a future center fielder, but he could break into the lineup as the left fielder this season.

Daniel Savage and Caden Cable are also in the outfield fix.

Junior outfielder/pitcher Ben Grubbs probably would have been a key man for the Cougars, but he’ll miss the entire season after being in a serious auto accident.

Carson enters the season with a nice nucleus, but with more question marks and uncertain positions than usual.

“I’ve still got a good feeling about it,” Cauble said. “Just being able to have a complete season is nice after a season that was stopped (by COVID) and then a half season. Now we’ve got the chance to look at some guys in non-conference games and we can give guys more of a fair shake. These have been tough times for athletes and for coaching staffs.”

Carson subtracted long-time assistant coach Brett Mulkey, who worked with the pitchers, to Catawba, but has added former hurlers Blake Cauble and Bradley Robbins to the coaching staff.

It’s been a change for Chris Cauble this year as he’s retired from the school system, but has continued as the baseball coach. It’s made it more challenging to keep tabs on the players, but he comes to the field fresher than he has in many years.

Cauble has more wins than any baseball coach in Rowan County high school history. He entered this season with 393 victories — 257 at Carson, where he has been the coach since Day One, and 136 at West Rowan before Carson opened. His teams at those two schools have won 68% of their games.

Carson baseball at a glance