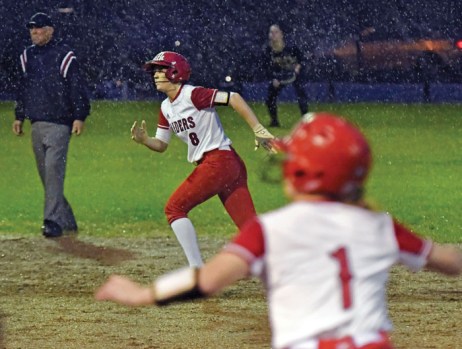 South Rowan's Kali Nelson takes off from second base as Avery Crowell watches the play develop from first in the rain. photo by Wayne Hinshaw, for the Salisbury Post 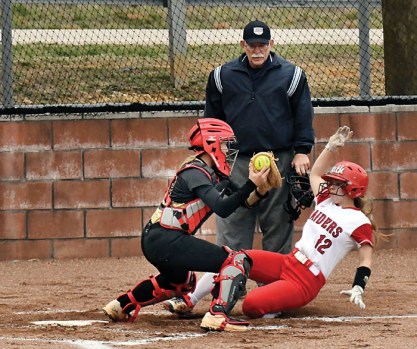 South Rowan's McKenzie Menius was safe at the plate, sliding under the East Davidson tag by Alyssa Staley. photo by Wayne Hinshaw, for the Salisbury Post 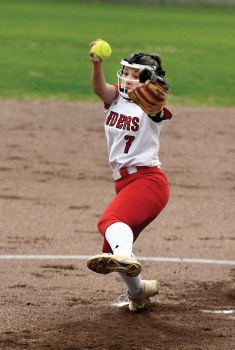 South Rowan's pitcher Lexie Ritchie should be a force for four years with the Raiders. File photo by Wayne Hinshaw, for the Salisbury Post 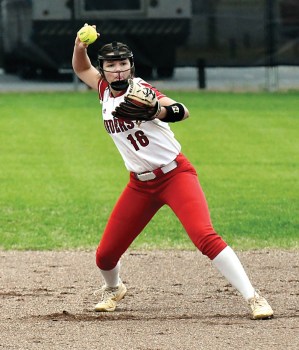 South Rowan's Kynlee Dextraze first to first after fielding a grounder at shortstop. photo by Wayne Hinshaw, for the Salisbury Post

LANDIS — South Rowan’s softball team bounced back from a couple of losses to cream East Davidson 15-5 on Tuesday.

“We took some smackings from A.L. Brown and Cannon School,” South head coach Dean Mullinax said. “But we showed we could handle adversity and we came right back today and played very well. This was one of the better hitting games we’ve had.”

It was 4-all when the Raiders broke it open.

The Raiders (3-2) got good pitching from freshman Lexie Ritchie. She’s one of six freshmen on the South squad.

While South is young, Mullinax is excited about competing in the South Piedmont Conference with good softball schools such as Central Cabarrus, West Rowan, Carson and East Rowan.

“It’ll be a challenge,” said Mullinax, who recently was named as a State Games coach. “But we’ve got more depth and more options than we’ve had in a while. We’ve got some freshmen who can play just about anywhere on the field.”

Tuesday’s West Rowan at West Stanly game was halted by rain in the fifth inning with the score 5-all.

Emma Clarke clobbered two homers for the Falcons, and Riley Haggas hit one.

Shyla Campbell was the winning pitcher.

Lindsay Wolford drove in two runs for the Wonders.

South led North Rowan 8-2 at North in a game that was suspended.

The teams plan to finish when North visits South Davidson.

Carson Crainshaw pitched a five-inning no-hitter for South Rowan in a 12-2 romp against West Davidson on Tuesday.

Ty Hubbard tripled and drove in two runs. Finch McMillin went 2-for-2 with a triple. Haiden Leffew had a double and three RBIs.

The East Rowan-Sun Valley game was postponed to Thursday at East.

West Rowan fell 5-2 to Alexander Central in a weather-shortened game on Tuesday.

The game was stopped in the bottom of the sixth with the bases full of Falcons.

All the scoring was early.

Luke Spiva homered in the third for the decisive run and had three hits for Catawba.

Cameron Morrison had an RBI double. Zack Miller got the other run home.

Catawba’s bullpen was stellar. Kenny Dollenger got the win.

The first-place team was Buddy Barger, Reid Bradshaw, Jim Brown and John Daniels. They shot minus-20.

The team of Gordon Correll, Ray Pope and Phil Rollins shot 19-under for second place.

Placing third with a minus-18 score was the team of Bob Niekras, Norman Schenk and Johnny Shook.

Winning scratch score was a minus-13 by the team of Bernard Caldwell, Tommy Ellis, Franklin Ford and Red McClain.

Closest to the pin on the No. 2 hole was Caldwell. The longest putt on No. 9 was made by Daniels.

Three eagles were made.

The team of Bishop, Medinger, Osteen and Struzick eagled the par-5 No. 18 hole.

Richmond’s Michael Childress shot 70-78-70 in the Ross Collegiate in Southern Pines. He was 2-under and tied for 13th.