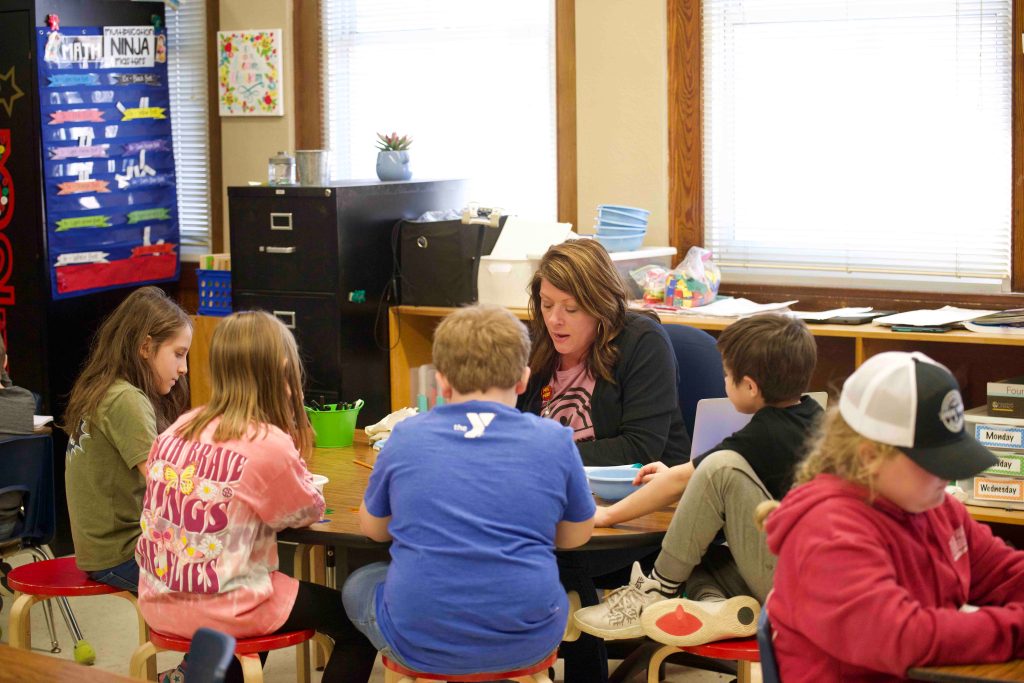 SALISBURY — When a bell rings in the middle of the day at Morgan Elementary, the school erupts in cheers.

Cheers don’t come for the electronic bell at the end of the day or during a class change. Classrooms in Morgan Elementary have physical bells for kids to ring when celebrating accomplishment such as finishing a unit in math.

The bells are a happy side effect of Morgan Elementary flinging itself fully into competency-based education. The school teaches the same material as any traditional elementary school, but the delivery and how students progress is different.

For Morgan Principal Derek DiStefano, the previous few years have been among the hardest and the most motivating of his career because of the implementation of competency-based education, but he is certain there will be benefits.

“I can assure you that by growth model we will keep up better. Over time, our proficiency will skyrocket,” DiStefano said. ”

The model dispenses with relics of traditional education: grade levels, letter grades and class-wide tests. A competency-based system is all about students mastering the material rather than a teacher fitting a block of material into 180 days.

“The purpose really is to personalize learning for every kid,” DiStefano said.

DiStefano said he’s never found something in education he’s felt was as correct as competency-based education. The biggest support he’s received from Rowan-Salisbury Schools is the full confidence in his team to look at things differently.

“For me, you open the door and I’m ready to go,” DiStefano said. “That doesn’t always happen at a lot of school systems.”

While students still get report cards, are based on age and take tests, all three look different. Report cards do not have letter grades; they show what material a student has mastered. Tests are based on demonstrating mastery and are given when students are ready instead of as a group. Levels are based on where a student is in the material rather than if the student was in a lower grade the year before.

DiStefano said the school keeps kids grouped in classes within two years of each other’s age, though students can be at different levels. The school has leaned heavily on material from Marzano Resources, the firm of prolific education researcher Robert Marzano. Faculty spent six months working after school to break down the standards — basically goals for learning — taught in the North Carolina curriculum and fit them into “scales” used in the new model.

DiStefano gave one example where four standards in the state curriculum made up one scale in second grade math. Once students master content of the scale, they move on to the next. Classroom charts are used by teachers show where each student is.

Some students are behind grade level, but they take the time needed to learn rather than being left behind. DiStefano said this system has stronger accountability for students because it puts learning in their hands, and they respond to it.

DiStefano said schools try to remediate, but they move on and the learning is not student-driven. He said the traditional model is designed to meet the needs of slightly average to slightly above average students. Gifted kids are held back from their potential, he said. Kids who struggle will continue to struggle.

“We end up with kids who can no longer keep up with the pace,” DiStefano said.

DiStefano described one third grade student who started the year remedial because of the pandemic. He was placed in the second grade math so he could catch up. That student mastered the content in January, was able to move up to level three and is now gaining on some of his classmates.

The program has gotten attention from other school districts in the state. Morgan said one official was so impressed the district is sending a larger group to observe. Someone from the N.C. Department of Public Instruction visited to see what the school is doing and develop a way to implement a competency-based model as part of NCDPI’s strategic plan. DiStefano is working with North Rowan and South Rowan high schools on their own pilots, though their models will not be full implementations.

Susan Morriston teaches level two at Morgan. She worked at Faith Elementary School, but two years ago she saw DiStefano speak during a workshop with the Rowan-Salisbury Schools Board of Education. The model intrigued her. So when the writing was on the wall for the closure of Faith Elementary, she called DiStefano to ask to come on board.

Morriston now heads up Morgan’s teacher-led design team. She said the the move to competency-based education has been the most challenging and rewarding experience in her 22-year career. After experiencing the system, there is no going back, she said.

“I truly believe in what we’re doing here at Morgan,” Morriston said. “I’m seeing the benefits.”

She sees the benefits for the kids who move ahead quickly and those who need extra time. In a traditional system, she had to get through a curriculum regardless of where her students were.

Morriston said teachers rely on technology more, inputting scores and progress into a system to track where each student is as an individual. Teachers administer pre-tests on subjects, which identify how much support a student needs. They give students post tests when they are ready to demonstrate mastery of a concept.

Because everyone is moving at a different pace, all lessons are delivered in small groups of students working on the same concepts.

What do the kids think?

Lucas Martin, a level two student who’s dream is to run a car dealership or become a Formula 1 driver, is one of the kids who finished his third grade math material early.

While math is his favorite subject, Martin said he was stuck in reading on the concepts of persuading, informing and entertaining until he got it on Friday.

Martin and all of his classmates who spoke to the Post said one of their favorite things about school is ringing the bell and moving up in lessons.

“You’ve got to be proud of some people for ringing the bell because they worked really hard to do that,” Martin said.

Ruby Corriher, who wants to be a veterinarian, also finished level two math on Friday, but reading and science are her favorite subjects. Corriher said she needs to take a pre-test in reading to get assigned the “pathways” that will take her through the post-test for the next set of lessons.

Corriher said she does not feel judgmental toward her classmates in the new system.

Level two teacher Hannah Hill said her students do not speak in letter grades anymore, and it has taken her by surprise how supportive the kids are of each other. Her class has an anonymous chart. Kids in Hill’s class move their markers along as they progress.

“They get so excited to move their own, but when we’re in line they say ‘Wow, these are all moving. Look how far our whole group has moved,'” Hill said, adding she does not remember conversations between the kids before this model about how themselves and their peers were progressing.