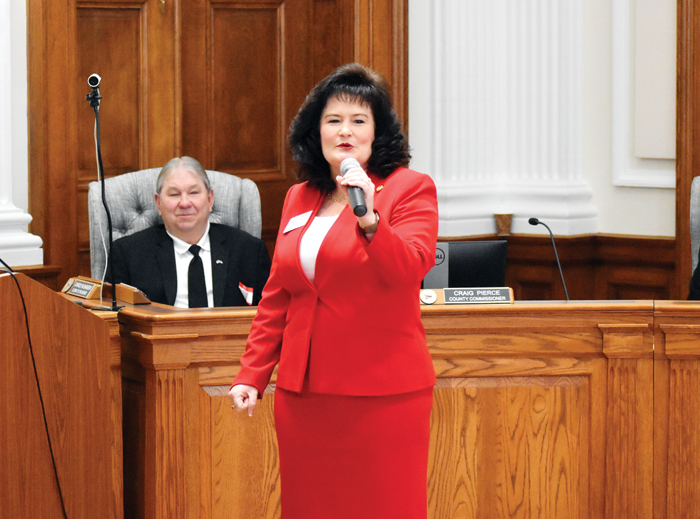 Judge April Wood, who is vying for a seat on the North Carolina Supreme Court, delivers a speech during the Rowan Republican Precinct Meetings and Convention. Ben Stansell/Salisbury Post

Spillman, whose platform is “pro-God, pro-life and pro-gun,” made it clear who she’s aiming to unseat in the primary election on May 17.

“I know I can’t go for all of their seats, but I am going for Judy’s seat,” Spillman said while looking directly at Klusman.

Spillman is one of two Republicans challenging incumbents Klusman, Vice Chair Jim Greene and Chair Greg Edds. Michael Julian is the other Republican. Alisha Byrd-Clark and Sam Post have filed to run as Democrats.

“I will defend the work the three of us have done, including the work of my friend Commissioner Klusman,” Edds said. “She has been there on every single vote that we’ve had and I would challenge you to find something where she has not supported a conservative thing that this group has done.”

Republican candidates running for everything from sheriff to clerk of court spoke during the annual convention held at the Rowan County Administration building. While a vast majority of the candidates who spoke are competing in local races, former U.S. Rep. Mark Walker, who is running for U.S. Senate, and Judge April Wood also delivered brief speeches. Marjorie Eastman, also running for U.S. Senate, arrived at the close of the convention but did not address the entire crowd.

Walker and Eastman are in a field that includes Rep. Ted Budd, Rowan County’s congressman, and former Gov. Pat McCrory. Neither were present Saturday.

During his speech, Walker touted support he’s received from sheriffs, pastors and North Carolina Rep. Madison Cawthorn. Walker said he’s the “only candidate that’s willing to come out and talk about how the election in 2020 was not fair and square.”

“Voter integrity needs to be on the ballot this fall,” Walker said.

Wood, running for one of two seats on the North Carolina Supreme Court, said she’s seeking to do her part to flip partisan control of the state’s top court.

Wood touted her courthouse experience as a reason why voters should pick her on the ballot.

“I’ve been a judge now for 20 years in both the trial courts and court of appeals and I need your help to take all of that knowledge and experience to the Supreme Court where I can better serve the citizens of North Carolina,” Wood said.

In the two-person primary for the seat of retiring District Court Judge Charlie Brown, only Cynthia Dry spoke during the convention. Like Wood, Dry highlighted her courthouse experience while also mentioning the time she spent as a school teacher.

“I am running for district court judge to put my nearly 30 years of public service to work for all of you and all of the people of Rowan County,” said Dry, currently a child abuse and neglect attorney for Department of Social Services.

Dry’s opponent, Lauren Hoben, was slated to speak, but she left the convention. Her husband, Paul Hoben, explained her absence and advocated on her behalf.

“Oddly enough, I find myself incredibly disappointed,” Paul Hoben said. “We came to the convention this morning and my wife Lauren was accosted by a member of the executive committee making accusations that are, quite frankly, part of them were completely untrue and the other part were her past.”

The local executive committee is composed of several dozen people, from club officers to elected officials.

Paul Hoben said his wife is a “conservative Christian woman” and is “what we need in Rowan County.”

Lauren Hoben said the comments actually were directed to one of her supporters, but declined to comment on the matter further. Rowan County Republican Chair Elaine Hewitt had no comment on the alleged exchange, but said she plans on speaking with the judicial candidate this week.

While many who attended the meeting were there to campaign, a number of interested voters attended the convention. Marion Sims, a western Rowan County resident, said he saw the event on Facebook and decided to attend to become an educated voter.

Sims said he wasn’t swayed by any particular candidate, but he was impressed with Michael Chapman, who intends to run for a seat on the Rowan-Salisbury School System’s Board of Education.

“He wants it to go back to the way it was when I went through school, where you learned reading, writing and arithmetic,” Sims said.

During his speech, Chapman said he would focus on fiscal responsibility and pledged to remove “all gender identity books” and eliminate phone usage.

Filing for the RSS Board of Education takes place after the May primary. The race is nonpartisan.

Candidate comments comprised most of the convention, but other matters were hashed out as well. Hewitt announced the Republican Party has moved into a new headquarters at 100 W. Innes St., Ste. 103. The party will hold a grand opening for the headquarters on April 1.

The party also has a slate of candidate forums scheduled for April. The forums will be open to the public. Questions can be submitted at rowan.nc.gop or by emailing vicechair@rowanrepublicans.com.

General information about the primary or voter registration can be found at rowancountync.gov/elections or by calling 704-216-8140.