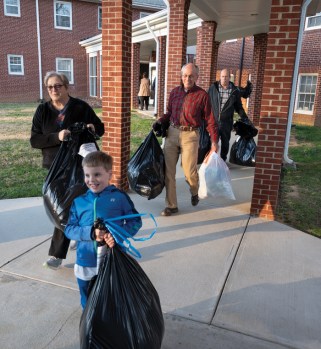 Josh Bergeron / Salisbury Post - Members of Christiana Lutheran Church carry out bags of blankets last week and load them onto a bus for delivery to the North American Lutheran Church in Statesville. 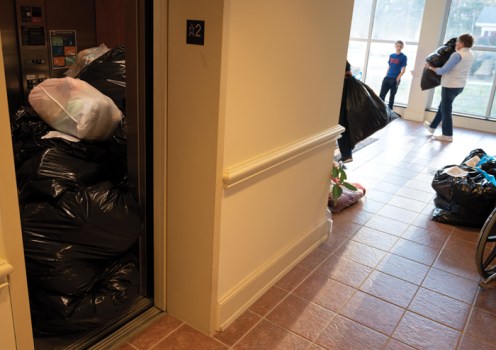 Josh Bergeron / Salisbury Post - Christiana Lutheran Church members last week used an elevator to help ferry bags filled with blankets to the ground level. The blankets were loaded into a bus for transport to the North American Lutheran Church in Statesville. 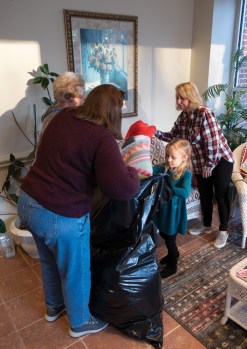 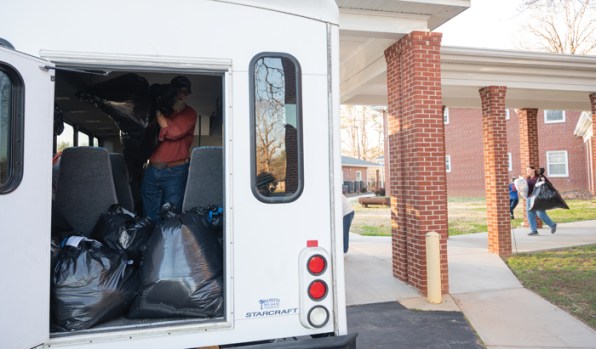 The church’s Hug a Blanket Project set an initial goal of 300 and a stretch goal of 500, but the final tally was 1,132 when church members delivered the blankets on Thursday. LaVaughn Beaver, the project leader, said blankets were still coming in after the delivery day.

Beaver said the church’s Sister Lucille Women’s Circle chose to donate blankets to the Lutheran organization because it depleted its supply after tornadoes swept through western Kentucky in December. Blankets also have uses other than warmth, Beaver said. They can be used to create shady spot on a sunny day, for children to play on and to sit on.

For Pastor Carl Haynes, the project fits in well with the mission of the church and is the latest in a number of charitable projects completed by Christiana’s congregation.

“Christ calls on us to serve those in need and we take seriously Christ’s calling,” Haynes said.

The large donation was made possible by the generosity of church members of all ages, including children who gave their own blankets and a veterans group that meets at the church on Tuesdays. There were homemade quilts, throws and baby blankets. Gently used blankets received a wash before donation. Beaver said church members asked family, friends and coworkers to help.

Some ladies volunteered to be super shoppers, using donated money to buy blankets to contribute.

The women’s circle also prayed for a successful project.

“And holy cow, look what happens when you pray for blankets,” Beaver said. “It brings tears to our eyes, and like Dennis the Menace recently said in the Salisbury Post, ‘It’s OK to cry, and not just while chopping onions.’”

Beaver said Christiana has adopted the motto “no blanket left behind” and intends to make a follow-up trip to the Statesville warehouse this week if there are any more donations.

The next women’s circle project will be health and school kits in May. They’ll be praying for an equally successful project then, too.