Salisbury man identified as victim in shooting near Walmart 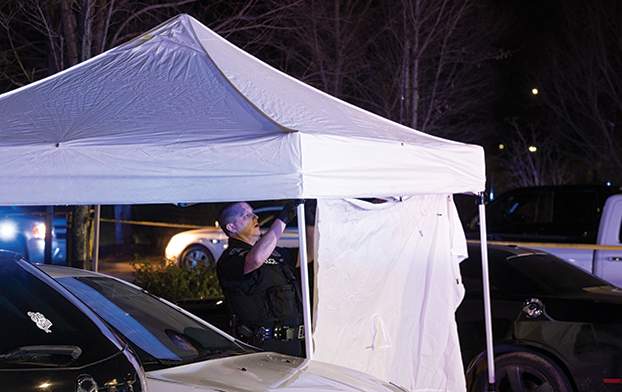 Josh Bergeron / Salisbury Post - A Salisbury Police officer on Thursday puts up a white sheet around a portable shelter placed over a body in the parking lot of a shopping center on Freeland Drive in Salisbury. The shopping center is across the street from Walmart.

SALISBURY — Police say a 35-year-old Salisbury man was killed Friday in a shooting near Walmart.

Michael Dwayne Connor Jr. died in a parking lot off of Freeland Drive after being shot just before 9 p.m. on Friday, a news release said. Life-saving efforts by police officers were not successful.

Graphic photos showed Connor lying on the asphalt, bleeding from his chest next to a white Dodge sedan with the rear driver-side door ajar and lights on. Police say only Connor was shot in the incident.

No one has been arrested and police haven’t released any suspect descriptions.

Police received help from the Rowan County Sheriff’s Office, Salisbury Police Department, N.C. Highway Patrol and other agencies in responding to the incident.

The Salisbury Police Department’s Criminal Investigation Division is actively investigating the incident and asks that anyone with information contact Lt. Crews at 704-216-7545, 704-638-5262 or investigations@salisburync.gov.

Editor’s note: This story has been updated since its initial publication to accurately reflect the name of the man who was killed.