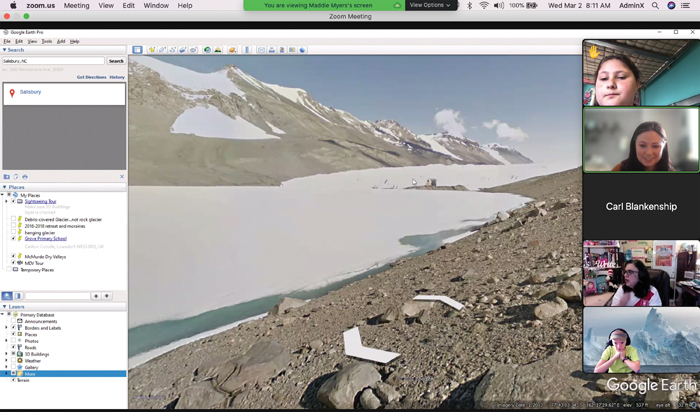 Madeline Myers shows students some of the geographic features of Antarctica with images compiled by Google Earth.

SALISBURY  – A group of Summit Virtual students took a trip about 9,000 miles south on Wednesday to learn about the planet’s most austere continent.

English as a second language teacher Mariel Gomez de la Torre has arranged a long list of virtual field trips for her students. They have been all over the world, taken on virtual tours by people in countries Europe to South America. Antarctica was elusive, but on Wednesday she got most of the way there with a follow-up trip planned later this year.

Populated almost exclusively by researchers and support staff to make life on the icy continent possible, there are no commercial flights to the continent and few people stay there year-round.

Madeline Myers, a scientist and PhD student at Queen’s University in Ontario, walked the class through some of the continent’s features and her experiences while working on the continent.

Myers is not on Antarctica at the moment. She told the class most people are leaving as the temperatures drop. Antarctica is in the extreme of the southern hemisphere. While temperatures are going up in North Carolina as we approach spring, temperatures there are plummeting this time of year.

Myers started in Salisbury and walked the class through how they would get to Antarctica. Myers said the trip would start at a North Carolina airport and typically you would fly to the West Coast and then to New Zealand. There, researchers are suited up with special gear to withstand the extreme temperatures in Antarctica before they make the final jaunt.

“You’ll notice in a lot of these pictures we’re kind of all wearing kind of the same clothes,” Myers said. “That’s because it’s provided for us because the weather is so cold.”

Flying out from New Zealand, you would probably arrive in McMurdo Station, one of three American science outposts on the continent and the largest in Antarctica. The station can support more than 1,200 people.

It has a water treatment facility, Wi-Fi in some buildings, a cafeteria and a store with essentials. Everyone sleeps in dorms.

Myers said all kinds of people can go to Antarctica, not just scientists. McMurdo needs carpenters, custodians, survival experts, mechanics and people to prepare food, along with others to make life and work at the station possible.

Myers also showed the class some of the geographic features of the continent, including the phenomenon of dry valleys. The aptly-named valleys are largely free of snow and ice. She talked about some of the fauna as well like penguins and orcas.

Myers said she has some of the animals herself and told the kids there are also starfish deep in arctic waters and fish with antifreeze properties in their blood.

The kids were full of questions.

One student asked how long Myers stays on the continent. She said she spends two months there at a time, but some people stay for a full year.

Another student asked what kind of natural disasters happen on the continent. Myers said there are blizzards and whiteouts often. She said in windy conditions the station shuts down and everyone has to stay put.

Myers said it can get warmer on the continent than you expect, noting in the warmest months it can reach 40 degrees.

Another student asked how people at the station entertain themselves. Myers said they bring lots of books and play games.

Since making the connection with Myers, Gomez de la Torre has now set up a virtual trip to Antarctica in November.