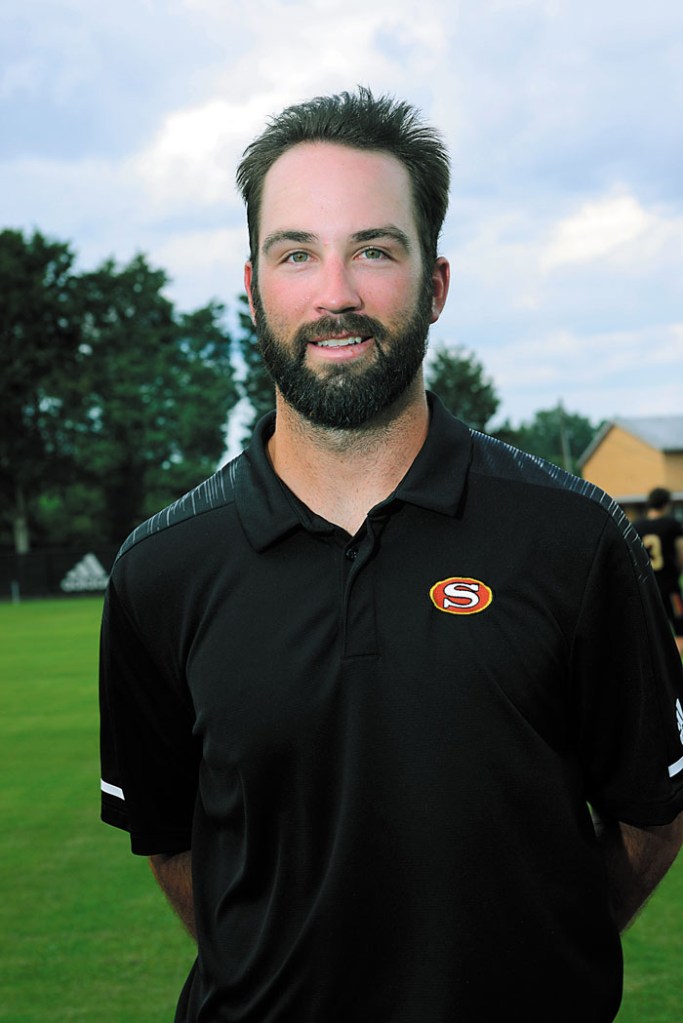 Carson Herndon is in his first season as Salisbury's baseball coach. File photo by Wayne Hinshaw, for the Salisbury Post

Third in a series of reports on local baseball teams …

SALISBURY — Carson Herndon follows his father, Mike, as the head coach of the Salisbury Hornets.

He was at it a long time as a head coach — at Southwest Guilford (101 wins, one state title), at Davie County (211 wins), and finally, at Salisbury, where his teams were competitive in the Central Carolina Conference. Mike racked up 375 career wins, with 63 of those coming at Salisbury.

Carson is imminently well-qualified to carry on the family tradition of flashing signals from the third-base coaching box. A 6-foot-4 All-State shortstop at Davie and an ace college pitcher at Liberty, he knows hitting, pitching and fielding.

Of course, coaching is more than hitting, pitching and fielding. Coaching is mostly knowing people and getting the best out of them. Carson, 29, has been logging experience in that regard as an assistant coach for Salisbury football and baseball.

His first head-coaching gig will be a challenging one.

Salisbury never has a deep talent pool, but the Hornets have boasted talented individuals in recent seasons, including Division I signees Bo Rusher, Jack Fisher and Vance Honeycutt.

Honeycutt was the Rowan County Player of the Year for 2021 and is starting in center field for UNC as a freshman. It goes without saying that you can’t replace someone like that.

“But we’ve got some pretty good players,” Herndon said. “Some good young kids. More talent than I expected.”

Senior Kaleb Burleyson, who catches and pitches, could be the marquee guy for the Hornets.

Senior Reed Fugle, the football and wrestling standout, is a returning starter in right field.

Senior Will Webb played mostly third base last season, but he could be the replacement for Honeycutt at shortstop.

Senior Luke Graeber got some experience in the outfield last season.

That’s pretty much it as far as guys with significant playing time under their belts.

Herndon is high on Jack Everson, who is expected to be the starting center fielder. He only had nine at-bats last season, but he could shine as a senior.

Aiden Mowery, a sophomore who didn’t play last season, can swing the bat. He’ll probably be the regular second baseman.

Freshmen are going to be a major part of the future — and the present — for the Hornets. That group includes Evan Koontz, Jackson Sparger, Cole Price, Hank Webb, Landon Tucker and Christian Rosado.

Koontz, Price and Webb will be counted on as frontline pitchers right away. Webb impressed Herndon in Salisbury’s scrimmage with North Rowan at Newman Park.

Tucker and Price can play the infield corners. Sparger can play several positions, including first base and left field. Koontz swings with authority and could be the Hornets’ No. 3 hitter.

“We’re sharing quite a few guys with the golf team and the track and field team,” Herndon said. “That could affect some of our game times.”

Also on the roster are new faces Jeremiah Harris, Jonathan Lang, Jamari Lambert and Cam Corpening, as well as Anthony Young, who got into a few games last season.

The baseball team should benefit from the revised 1A/2A Central Carolina Conference as much as any Salisbury squad.

Salisbury won’t have to deal with strong baseball schools such as South Rowan, North Davidson, Oak Grove and Ledford, all of whom moved up to 3A with realignment.

There may not be any sure things on the schedule for such an inexperienced squad, but the Hornets should be able to compete with most of their league opponents.

Salisbury got the season off to a pretty wild start, beating North Hills 10-6 and losing to Gray Stone 16-12.

The Hornets banged out 17 hits against Gray Stone, but still lost, mostly due to eight errors.

“If we can throw strikes and minimize the errors, we’ll have a chance to compete and win a few ballgames,” Herndon said.

The home opener at Robertson Stadium against Surry Central (1-0) is tonight.

Salisbury baseball at a glance