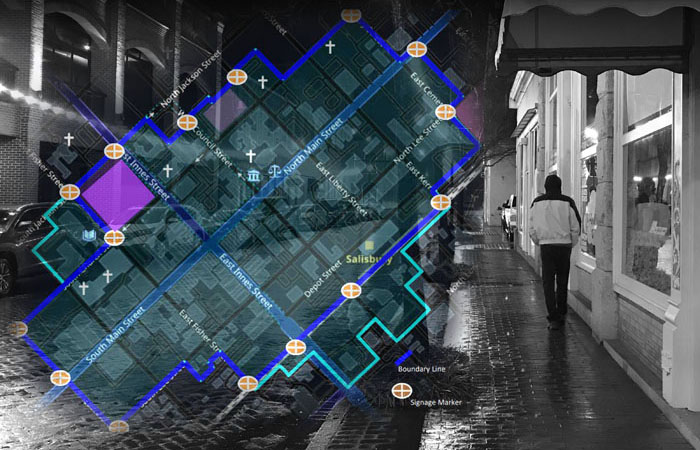 Andy Mooney/Salisbury Post The municipal services district will be the proposed boundary for the new social drinking district.

SALISBURY — City Council members may start small with a downtown social drinking district out of concern for youth safety.

A social district would allow consumers to purchase alcohol from state-licensed businesses and restaurants and walk around a designated district with specially marked cups. Leading this proposal is Downtown Salisbury, Inc., which hosted several public engagement sessions in January. The organization presented its proposal to council members Tuesday.

DSI proposed the boundaries include the entirety of the municipal services district, the area officially considered to be downtown, in addition to the Napoleon Bonaparte McCanless House at 619 South Main St., which is working to become an events and wedding venue.

DSI cited a number of pros for the district, including business growth, increased downtown spending and another revenue stream for businesses that aren’t bars and restaurants because they could seek licenses to serve to-go drinks. A district would eliminate some of the “red tape” for businesses seeking special permits to serve alcohol for events, DSI representatives said. Ultimately, the goal is to make Salisbury a downtown destination where people will spend the day or weekend instead of just a few hours.

DSI is suggesting the district operate from noon to midnight Sunday through Thursday and from noon to 2 a.m. on Friday and Saturday. Drinking hours wouldn’t begin at Bell Tower Green Park until 5 p.m., and the Parks and Recreation Department could determine whether the park should be excluded from special events where alcohol consumption at the park may not be appropriate.

During a public comment period at the beginning of the meeting, Lauren Alexander-Persse of YSUP Rowan, a nonprofit aimed at substance use among youth, shared concerns about influence the district could have on youth attitudes toward alcohol consumption. However, she commended the work between YSUP Rowan and DSI to reach a compromise, which includes a per-cup fee with proceeds dedicated to youth substance use prevention measures, limited hours of operation at Bell Tower Green Park and opaque cups.

DSI board member Samantha Haspel said the organization tried to seek opaque cups for the alcohol, but none meet the city’s recycling standards. Cups will display one sticker for the to-be-determined logo for the drinking district and one sticker from the participating business. The cup would also include the name of the patron, date and time of purchase and a call to drink responsibly. No more than 16 ounces of liquid would be permitted.

The district would be jointly managed by city staff, Salisbury Police Department for enforcement and the Public Works Department for trash, recycling and signs.

Council member Harry McLaughlin commended the creative way to generate revenue for small businesses, but expressed concerns with the proposed map and the inclusion of Bell Tower Green Park. Some areas within the MSD include churches and neighborhoods, he said. Additionally, allowing drinking at the park at 5 p.m. is still early, especially in the summer when families may enjoy the park with their children, he added.

McLaughlin also said operating at noon is concerning because there could be drunken adults near children during the daytime. He suggested starting small and growing the boundaries from there, with the district focused only on participating businesses.

Salisbury resident Whitney Peckman said the “vision of people drinking while they visit our new park where children play is not very desirable.” She added that, despite her personal opposition, she requested there be some sort of trial period with an opportunity to review after a few months.

Haspel said DSI isn’t proposing a trial period, but she agreed it would be beneficial to meet periodically with city leaders to review performance and discuss concerns.

Council member Anthony Smith asked if other cities implemented a trial period. Stewart Troutman said the municipalities DSI spoke with did not, but there was a delay period after Greensboro implemented its district. Kannapolis, Norwood and Charlotte have implemented their own districts.

Mayor Pro Tem Tamara Sheffield, a coalition member for YSUP Rowan, said concerns mentioned are valid. The council can always change course after the district is implemented, she said.

“This is not going to be a magic bullet,” Sheffield said. “But I don’t think it’s going to turn our city into Vegas.”

Mayor Karen Alexander suggested council take another careful look at the proposed boundaries and submit feedback to DSI ahead of a March 15 public hearing about the proposal.

• The council approved several appointments to the city’s boards and commissions. Alexander nominated the appointment of Chad Morgan for the Alternate Methods of Design Commission, Eric Phillips for the Greenway, Bicycle and Pedestrian Committee and Lillian Goodnow for the Historic Preservation Commission. John Wear and Sashi Sabaroatnam were also re-appointed to the Greenway committee. Smith nominated the re-appointment of Gemale Black and Bill Clements to the Human Relations Council. McLaughlin nominated Ben King and DaNiya Richardson for the Parks and Recreation Advisory Board, as well as Matt Kelley for Tree Board and Rena Taylor for the Hurley Park Advisory Board. A few vacancies remain to be filled, with most terms expiring on March 31.

• The council approved a $650,000 contract with Atlantic Coast Contractors for construction on the Sanitary Sewer Rehabilitation Project.

• Council added Juneteenth to its city staff holiday calendar, replacing President’s Day. The holiday will be observed on June 20. Juneteenth commemorates the emancipation of enslaved people in the U.S. and was recognized as a federal holiday last year.

• Council approved a right-of-way use permit for the use of two parking spaces adjacent to 133 South Main St. until April 1 for building renovations.