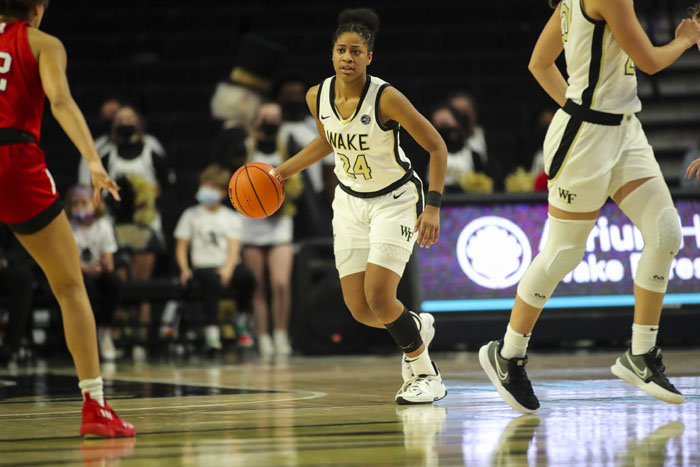 GREENSBORO — Jewell Spear scored 15 of her 23 points in the second half and 11th-seeded Wake Forest put together a late run to defeat 14-seed Virginia 61-53 in the first round of the Atlantic Coast Conference tournament on Wednesday.

Olivia Summiel’s 3-pointer with 5:32 to play gave the Demon Deacons their first lead since early in the second quarter at 51-50. It also started a game-closing 14-2 run as the Cavaliers went cold, missing their last five shots.

Christina Morra scored 13 points and grabbed 10 rebounds for the Demon Deacons, who finally found their shooting range in the fourth quarter, going 7 of 12 and still finished the game at just 42%.

Spear had five 3-pointers, moving her to second on the school’s single-season list with 88, nine behind the leader. She helped her team overcome 20 turnovers, 10 more than Virginia.

Virginia (5-22) has lost five straight in the series the Cavaliers lead 69-9.

Mir McLean and London Clarkson both scored 11 points for the Cavaliers, but the team only shot 33%, going 4 of 12 in the fourth quarter.

Spear hit a pair of 3-pointers in the first quarter to help Wake Forest take a 12-11 lead, but the Demon Deacons went cold in the second quarter. They didn’t get a basket after Niyah Becker tied the game at 18 at the 6:14 mark.

Spear scored 12 points in the third quarter to keep Wake Forest in the game.

Virginia didn’t light it up, shooting 19% in the first quarter and 27.5% for the half, but Wake Forest missed it last six shots and had 11 turnovers to the Cavs’ two.

GREENSBORO  — Shayeann Day-Wilson scored 22 points, hitting one of several critical baskets down the stretch, and 10th-seeded Duke edged 15th-seeded Pittsburgh 55-52 on Wednesday in a first-round game of the Atlantic Coast Conference tournament.

Destiny Strother’s tying 3-pointer rimmed out at the buzzer.

The Blue Devils only made four 3-pointers but two came in the fourth quarter, including one by Day-Wilson, the ACC Freshman of the Year, at the 1:10 mark to push the lead to 53-49. Then Elizabeth Balogun hit a step-back bucket at the shot-clock buzzer to make it 55-51 with 21.5 seconds to go.

Twice in the last 1 1/2 minutes Pitt went to the line but only made 1 of 2 free throws. Duke missed a pair with six seconds left, giving Pitt, which led by 16 points in the second quarter, one last chance.

Duke (17-12) faces seventh-seeded Miami in the second round on Thursday.

Free throws were a problem all game as the Panthers finished 6 of 17, including 4 of 9 in the fourth quarter. Duke also struggled, going 13 of 22.