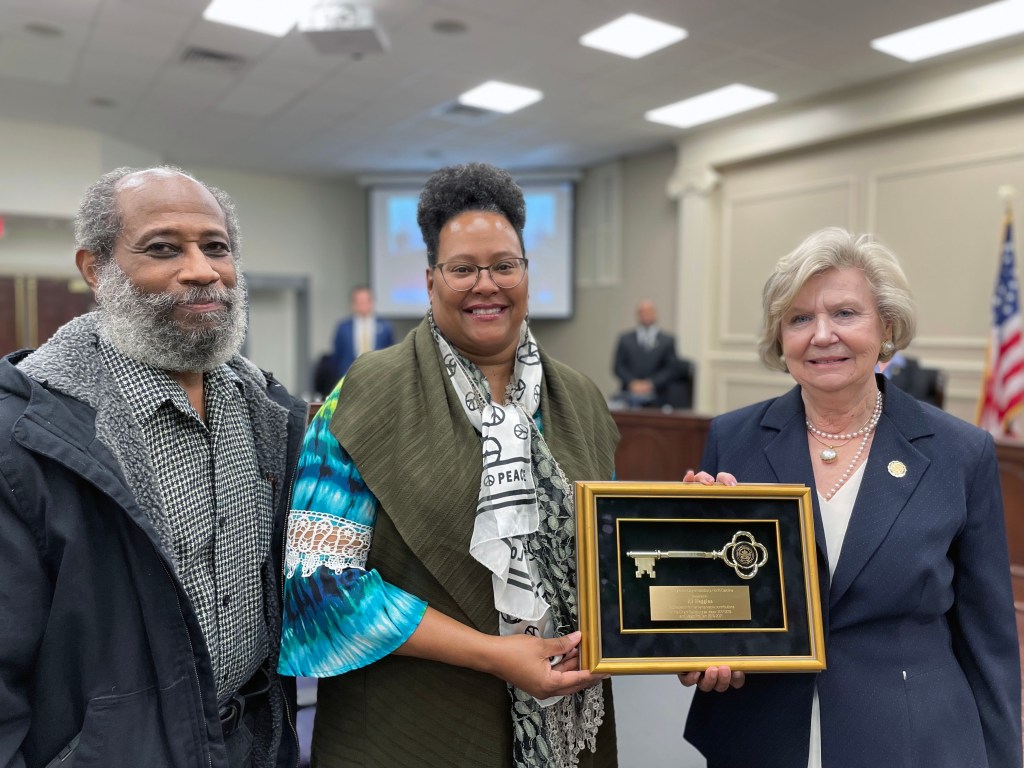 Natalie Anderson/Salisbury Post — Al Heggins (center), former mayor and mayor pro tem of Salisbury, was granted a key to the city and formally recognized Tuesday for her time on City Council. She was joined by husband, Isaac, and Mayor Karen Alexander.

SALISBURY — Al Heggins on Tuesday was given a key to the city and recognized for becoming the first Black female mayor of Salisbury and serving on the Salisbury City Council.

Heggins made history in 2017 when she was the first Black woman elected to city council and appointed the city’s mayor after finishing first among all candidates. She then served as mayor pro tem from 2019 to 2021 before Mayor Karen Alexander narrowly defeated her in the mayoral election.

Due to a family medical emergency at the time, Heggins was unable to attend the Dec. 7 meeting where new members were sworn in and outgoing members, including Brian Miller, were recognized. She told council members Tuesday the emergency resulted in a new birth in the family.

Heggins received a resolution outlining her time on council, a framed picture of City Hall and a key to the city.

Alexander read a resolution that highlighted Heggins’ “heartfelt desire” to help the community and for her work to spark a “renewed hope for the community.”

“Al Heggins always sought to provide a voice to those who are not heard and to connect with members of the community who may not have engaged in local government to make government accessible and responsive to all people,” the resolution states. “And whereas, Mayor Al Heggins championed inclusion and equity and advanced initiatives to create a positive change for both the organization and the community.”

Alexander said in the resolution Heggins was key in the city’s resolution of reconciliation made in 2019, which condemned “all acts of violence and racial terrorism perpetrated against African-Americans, from which they were not rightfully protected during the Jim Crow era” and initiates the process of “reconciliation of racial injustice.”

Heggins was credited for bringing Salisbury “to the national stage” when she hosted a visit from White House officials in 2019 to discuss opportunity zones. Additionally, Alexander said Heggins understood the importance of living wages for city workers and frontline workers and advocated for their compensation to reflect their value to the community.

Mayor Pro Tem Tamara Sheffield choked up when delivering her thanks and said Heggins has taught her so much since their first time on council together.

Council member Anthony Smith said his work alongside Heggins dates back before her time on council, when both worked at the grassroots level to bring about positive change in the community. Smith said he views Heggins as a mentor and appreciates her “fierce advocacy for diversity, equity and inclusion.” He added that she inspired his run for City Council.

Council member Harry McLaughlin said Heggins’ campaigning and leadership also inspired him to seek the council and thanked Heggins for her support.

Council member David Post said Heggins made the council and city view a lot of issues from a different perspective. Post said her campaigning brought a new spirit and energy into the community the city had never seen, and that he “watched her increase the amount of oxygen in the room anywhere you went.”

In addition to her many thanks to council members and city staff, Heggins said she is still busy doing work in the community.

“It’s not about the titles,” Heggins said. “It’s about the public service.”