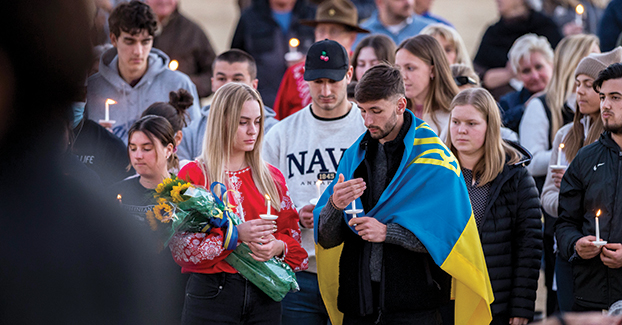 SALISBURY — Catawba College sophomore Veronika Poliakova was studying for midterms last week and decided to check the news before bed.

When she saw news Russian President Vladimir Putin and his military forces invaded and began bombing her home country of Ukraine, her first thought was “it’s not possible.” Then, the panic set in.

She immediately contacted her parents, who told her they woke up at 5 a.m. to the sound of explosions and their home shaking.

Poliakova and her family live just outside the capital of Kyiv. Tennis brought her to the United States. She accidentally grew to love tennis when she was 10. When it was time to consider a post-secondary education, Poliakova knew it was possible to play tennis while earning a degree in the U.S.

On the hunt for a small, private school, she came across Catawba College and enrolled last spring. Though she’s studying biology, she’s now considering a career in sports management.

But Poliakova says processing the ongoing developments in the conflict while balancing her studies here is a challenge, especially because she’s safe in America and worries for her family back home. Her family’s home has a small basement, and it’s housing two other families who lived in apartment buildings. While all the children stay in the basement, the adults rush to take cover when they’re notified of an incoming explosion nearby.

Poliakova has been sending her parents information about the ongoing conflict, mostly relying on Ukrainian media. Meanwhile, her parents keep her updated on the tragedy back home. Over the weekend, Russian forces bombed an oil tank about 12 miles from her home, she said. One-half hour later, a gas pipeline exploded near the Russian border. Later in the day, a third target was a radioactive area. Poliakova said that means the conflict is harming the environment, too.

“People are dying. Everybody is struggling,” Poliakova said. “And it’s painful to hear when my family is saying something normal like, ‘Oh yeah, something was bombed again. Tonight, we tried to sleep in the basement but we could feel how our house was shaking.’”

Poliakova said Americans aren’t as knowledgeable as they should be about the relationship between these nations and Ukraine’s work to establish itself as an independent, sovereign country apart from Russia. While international media, including American media, has mostly been reliable, Poliakova said it’s often outdated because Ukraine’s time zone is several hours ahead. Additionally, international media hasn’t captured the full “bloodiness” of the “full-scale war.”

She said part of that blame falls on Putin, notorious for misinformation campaigns and rhetoric that has influenced how other nations view Ukraine and its people. The misinformation is strategic, Poliakova said, because it helps Putin garner support and justify the invasion of Ukraine. While older adults in Ukraine still reflect fondly on Soviet Union times, younger generations are democratically minded, she said.

To help Americans and her friends better understand, Poliakova has been posting information on social media, including more gruesome looks at what’s happening back home. Additionally, she’s been vetting the credibility of a number of donation funds that have been created to help the Ukrainian people. One credible platform she’s directing people to is comebackalive.in.ua/.

“(International media) are not fully capturing the picture of what’s going on and what it can look like,” Poliakova said. “I really want people to know what it actually looks like.”

While Poliakova says it’s hard to know Putin’s ultimate goal, she believes he’s trying to recover territories lost after the fall of the Soviet Union in 1991. She’s thankful for the number of countries who have rallied to support and back Ukraine in its fight against Russian forces. She commended the citizens of Ukraine and Ukrainian military forces for their bravery in defending their home.

Poliakova sees Ukraine as a sort of “shield” for the rest of the world because it isn’t part of NATO and further aggression could fuel the fire of war.

An invasion of this scale has been a fear of hers since 2014, when Russia annexed the Crimean Peninsula and backed a rebellion of pro-Russian separatists in Ukraine’s east. Poliakova said she was young, but she remembers the shift even in her family dynamics. All of a sudden, she and her younger brother, Nikita, who’s 14, were no longer the center of attention because her parents were often on the phone and keeping up with the news to protect their family as best they knew how.

Since then, thousands of lives have been lost. The toll continues to rise.

Poliakova’s parents are architects. Her father is volunteering to fight with Ukrainian military forces.

Poliakova recently discovered she accidentally took the key to her home in Ukraine when she returned to school.

“I hope it’s a sign that I will have an opportunity to come back and open my house on my own and it still will be there with all my family healthy and alive,” she said.