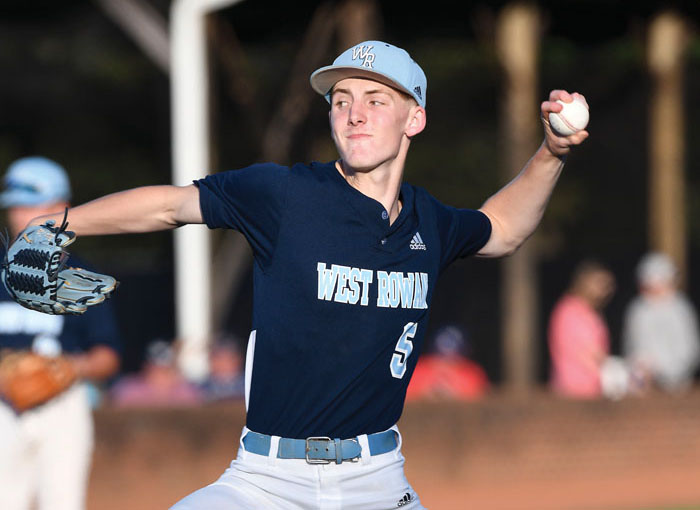 West’s Casey Gouge pitches during a game against East Rowan last season. photo by Wayne Hinshaw, for the Salisbury Post

Second in a series of reports on local baseball teams …

The team batting average languished in the .230s. The only .300 hitters in the lineup — Andrew Kennerly and JT Fecteau — graduated.

So why is head coach Seth Graham smiling?

Aren’t the Falcons headed into South Piedmont Conference play, where they’ll be taking on teams led by Division I recruits?

Well, the Falcons’ pitching should be solid again, and the mound is always the key. Pitching is roughly two-thirds of the baseball equation.

“We believe we’ve got the pitching to compete for the conference championship,” Graham said. “And I won’t have an easy time making out our lineup card. We’ve got more than nine who can play.”

That’s always a good problem to have.

West’s offense and defense may be better than they were in 2021. There are a lot of familiar names on hand, a lot of experienced players.

“It’s not like we’re going to send any monsters to the plate, but we have a lot of guys who can handle the bat and do different things,” Graham said. “This is one of the deepest teams I’ve had. These guys are going to grind out at-bats. Up and down the lineup, we should be tough outs.”

The pitching will start with lefty ace Casey Gouge.

The Catawba recruit won four times in the drastically shortened 2021 season and he didn’t beat any chumps. He logged victories against South Rowan, Carson and East Rowan.

Gouge can go head-to-head with any hurler in the county. He’s the main reason the Falcons can’t be counted out of the league race. If he’s got his stuff, he’ll give West a chance every time he goes out there.

Right-hander Jake Blevins also won varsity games last season and his ERA — well under 2.00 — was in the same ballpark as Gouge’s.

Luke Graham is probably No. 3 and will be an important guy. He was limited to second base duty last season after suffering a collarbone injury in football, but he’s fine to pitch now.

Other hurlers will be Drew Burton, Alex O’Rourke, Nate Green and Matt Connolly, who will be employed in a lot of different roles by the Falcons.

West has versatility. Several players can handle multiple positions with no drop-off with the gloves, so West can put a capable defensive team on the field no matter who pitches.

Catching will be handled by Connolly and Noah Loeblein. Both figure to be in on the lineup somewhere just about every game. Loeblein can move out to right field, while Connolly can play first base.

Peyton Summerall is a returning starter at third base, while Luke Graham returns at second base.

The Falcons are counting on freshman shortstop Brice Knox to be an impact player.

‘He’s good and he’s got a chance to be great in the future,” Coach Graham said. “He’s the fastest guy we’ve got.”

A first base-committee includes Gouge, who had nine RBIs last season to tie for the team lead, Connolly and Drew Burton. It will depend on who’s pitching.

Senior Zander Burton will be the outfield anchor in center field. Zach McNeely and Elijah Palmer probably will share left field. In right field will be Gouge, Loeblein or Blevins.

Also in the outfield mix are seniors Blake Oliphant and Brandon Foster.

April is the month that will tell the tale for the Falcons.

SPC teams are scheduled to play each other twice in the same week. West will take on Carson back-to-back on April 12 and 14. West will face East Rowan on April 19 and 22, and will tackle South Rowan on April 26 and 29. It’s possible that no one in 3A will have a tougher stretch run than the Falcons.

“Those last three weeks will be a major challenge,” Coach Graham said. “Since I started coaching here in 2015, we’ve had good conferences, but this is, by far, the toughest league we’ve ever played in. No nights off. Better bring your ‘A’ game. Whoever finishes on top will have a legitimate shot at a state title.”