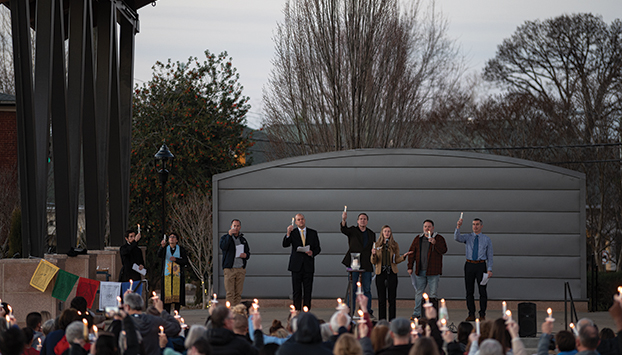 “It was really beautiful to look out and see all of those candles lit, hundreds of them lit, in unity and prayer,” said Musser Gritter, co-pastor of First Presbyterian Church.

A few hundred people from various denominations gathered at Bell Tower Green Monday night for a prayer vigil organized by local churches. The idea for the vigil started with a simple email chain between pastors of downtown churches late last week.

“When we first had the email going back and forth, we just thought it would be a handful of us gathering here on the grass,” First United Methodist Church Rev. Mark Conforti said.

As more people found out about the vigil through social media or their Sunday morning church service, the number of people going to the gathering started to grow.

“There was a groundswell of support that was garnered over the weekend,” Conforti said.

Standing at the front of the crowd with a bouquet of sunflowers in the crook of her arm was Veronika Poliakova, a sophomore tennis player at Catawba College whose family lives near Ukraine’s capital city of Kyiv. Poliakova was joined by a Ukrainian friend who attends college in South Carolina and drove up for the event.

“I’m really thankful that I’m here and met so many amazing people who are supporting and praying for my country,” Poliakova said.

Poliakova was stunned by the outpouring of community support.

“I didn’t expect that many people would come,” Poliakova said. “It seems like the whole Salisbury community came.”

People followed along as more than a handful of pastors quoted scripture and led a litany prayer.

Jim Stringfield, who attends First Baptist Church, prayed while cradling a blue and yellow Ukrainian flag against his shoulder. Stringfield, his wife, and several members of their church traveled to the western Ukrainian city of Munkacs in 2011 on a mission trip. During the stay, they led children through Bible school lessons and taught science experiments. To commemorate the trip, Stringfield and the church bought the flag he carried more than decade later to the vigil.

Stringfield thought about the country he visited and the war it’s currently fighting.

“When the Berlin Wall fell, we thought this was all over,” Stringfield said. “I never imagined that the Russians would be on the march again. This is really a good versus evil. It’s very clear.”

He also thought about his own country.

As the sun started to sink below the horizon, participants held their candles in the air and prayed. A prolonged moment of silence was accented at the end by the ringing of the Bell Tower before everyone recited the Lord’s Prayer. Musser Gritter ended the vigil with words of encouragement.

“Remember, we seek God not as individuals, but as a community of faith knowing that God listens to the prayers of God’s people both here and in Ukraine and beyond,” Musser Gritter said. “Friends this evening, may you go in peace to love and serve the Lord knowing Christ’s peace surpasses all understanding. Amen.”

As people lingered on the green talking with one another, the water wall bathed the park in a blue and yellow glow.

Musser Gritter hopes the vigil will have a lasting impact in more ways than one.

“I have two hopes. One, I hope truly our prayers are heard and God intervenes in some way beyond our understanding to bring peace and safety for Ukrainians,” Musser Gritter said. “Second, I hope this is the first of many times we gather ecumenically on the Bell Tower Green for prayer and worship.”