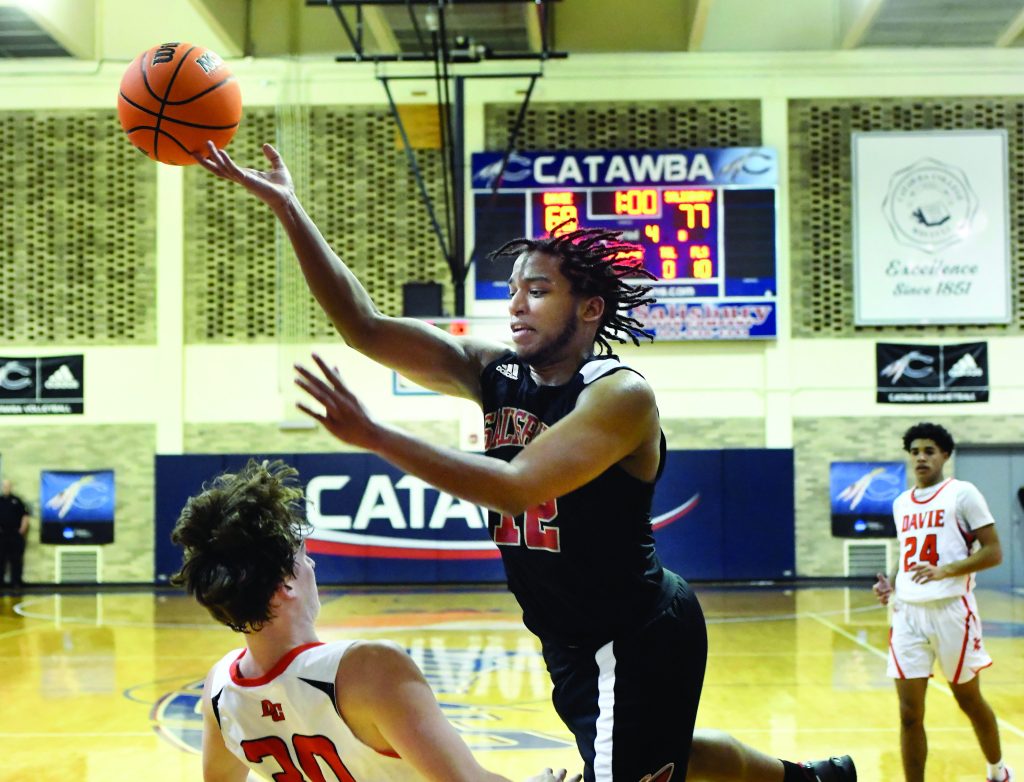 Salisbury's Cameron Stout is the Rowan County Boys Basketball Player of the Year. Photo by Wayne Hinshaw, for the Salisbury Post 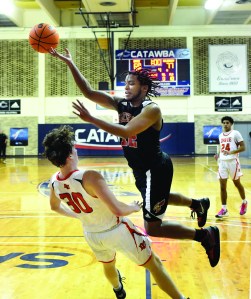 Stout made four 3-pointers and scored 16 in the last eight minutes, but North Surry held off the Hornets 73-67 on Saturday in the third round of the 2A state basketball playoffs.

With a 495-point senior season, Stout finished with 979 career points, pushing to the edge of a 1,000-point career despite having his junior season cut in half by COVID.

He needed one more game to get to that milestone, and the Hornets fell short at the “Dawg Pound” in North Surry’s Ron King Gymnasium.

Stout scored 26, two short of his career high. He had 12 rebounds.

Sophomore Juke Harris, who led Rowan County scoring this season with 23.1 points per game, finished with 20 points and eight rebounds.

Fifth-seeded Salisbury (20-5) made its best playoff run for coach Bryan Withers since the 2017-18 team lost to Forest Hills in the regional final.

North Surry’s Greyhounds (22-4) got a career game from junior guard James McCreary, who pumped in 31 points, and a lot of rebounds from junior forward Cam Taylor.

Junior Jahreece Lynch had 24 points and six rebounds for the Greyhounds and threw down the dunk in the third quarter that gave the home team the momentum for good.

North Surry didn’t get off to a great start and needed a buzzer-beating 3-pointer by Lynch for a 12-all tie after a quarter. Stout didn’t come out hot, but Harris scored eight for the Hornets in the first quarter.

Lynch made his second last-second 3-pointer to give the Greyhounds a 31-26 halftime lead.

The third quarter proved decisive. Mike Geter scored on a reverse for the Hornets to make it a 31-28 game, but North Surry put up the next 10 points, including the 6-foot-3 Lynch’s emphatic dunk.

The Hornets slid behind 52-36 before Hank Webb made a 3-pointer late in the third quarter. North Surry took a 15-point lead to the fourth quarter.

Jalen Chunn made two 3-pointers in the fourth quarter, in addition to Stout’s closing spree, as the Hornets tried to rally.

Salisbury scored 28 in the quarter, but North Surry made 11 of 15 free throws to keep the lead.

The 2A West bracket is wide open with seventh-seeded Monroe at No. 6 seed Robinson and No. 9 West Caldwell at No. 4 North Surry in Tuesday’s matchups.