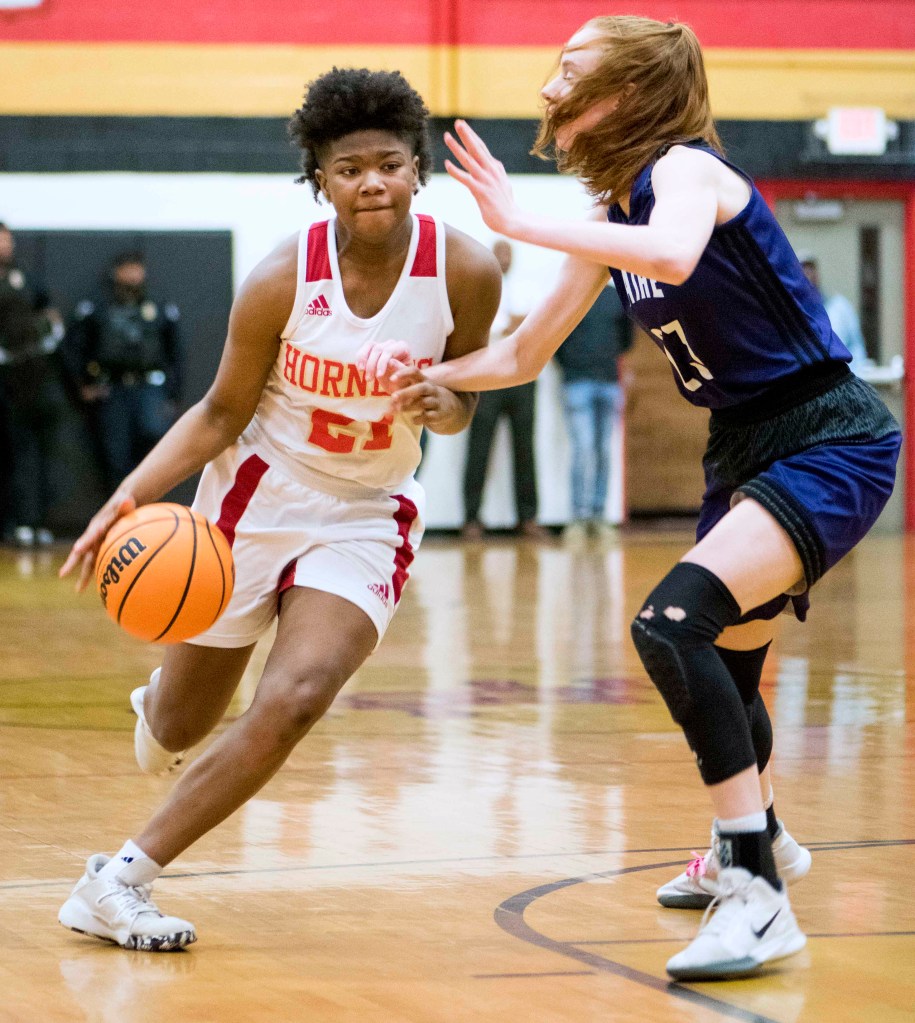 They can shoot and pass and they’re skilled enough and smart enough to score in other ways if you take away the 3-point line. Mary Morgan and Jaleiah Gibson enjoy setting screens for them and looking for them, so Bryant, a junior, and McCullough, a senior, are going to get double digits every night.

They’re a great backcourt combination. The’ve been doing it two or three times every week for a very long time. It’s going to happen. You can’t stop it.

But the key to the mission of winning a 2A state championship is Jamecia Huntley. She’s the X factor, the difference-maker. She doesn’t shoot the ball like McCullough and Bryant, but the 5-foot-10 junior small forward is the Hornets’ best passer, best rebounder, best defender, best runner and best jumper.

“Athletically, there’s no limit for her,” Salisbury head coach Lakai Brice said. “She’s such a special athlete. The skills to go with that athleticism are coming.”

The key for Huntley is health. She didn’t have that as a sophomore. She wasn’t skying and she wasn’t flying, not because she didn’t want to, but because she couldn’t. She was hurting and playing at maybe 50 percent.

The other factor is consistency. If Huntley ever becomes as much of a sure thing as McCullough and Bryant, well, who’s going to beat the Hornets?

Forest Hills had come to Salisbury right before Christmas and had taken it to the Hornets for about 20 minutes. Salisbury was down 13 in the third quarter before fighting back to win.

Forest Hills returned to the Salisbury gym with plenty of confidence on Saturday.

That’s putting it nicely. It was 71-30. The Hornets were merciful. They played all 10 girls a lot.

“They had us down the first time we played them, so we knew this was a team coming in here believing they could beat us,” Brice said. “They came in with hope. Those first five minutes were going to be critical. We needed to take that hope away.”

Two Huntley steals and 45-foot drives for layups were sandwiched around a Bryant 3-pointer. The Hornets led 7-0. Hope was fading.

“Fast start and we needed that,” Bryant said. “In the second round, Community School of Davidson scored first against us. Not today. Our defense was solid and we made our shots. We picked it up on offense.”

After Morgan fought for an offensive rebound, made two free throws and got a layup off a nice pass from Bryant, it was 11-0.

It took Forest Hills six minutes to score. That made it 13-2. By then, hope was just about gone.

The key to Forest Hills is guard Jamyah Blakeney, a perennial player of the year in her conference. She had a fantastic game against Salisbury in the first meeting. The highlights aren’t hard to find. She had 28 points, six steals, five assists. She got a lot of layups off quick-handed steals and shot a lot of free throws.

Needless to say, Huntley, taller and just about as quick, was called on to guard Blakeney. That’s why Forest Hills scored zero in those first six minutes.

“Jamecia’s defense set the tone for the whole game,” McCullough said. “Blakeney shot a lot of free throws the first time we played them. The goal was to keep her off the foul line and to take away the drive. Make her make jump shots.”

Huntley sat down for a rest. Blakeney got a three-point play. That helped Forest Hills get back to 19-7 after a quarter.

It was 19-9 when the Hornets went on another run. McCullough had started a little cold, but her 3-pointer made it 27-9.

It was 34-14 at halftime. The Hornets continued to build on their lead in the second half. They won going away.

There was a play where Blakeney, who scored 18, drove and was cut off by Huntley. Blakeney passed to a teammate who appeared to have an open look. Huntley bounced over to the corner and swatted the shot toward the wall.

Gibson had an exceptional game, getting rebounds, getting steals, setting screens. Morgan pulled down 10 rebounds. It all came together for the Hornets.

Salisbury’s second unit — MaKayla Noble, Icecis Nwafor, Haley Dalton, Kiki Walker and Shamya Arnold — weren’t much of a drop-off from the first. They kept it rolling when called upon.

Nwafor blocked a shot and fired a sweet bounce pass through traffic for a layup. Noble scored on drives and jumpers. Walker and Arnold finished buckets that got the crowd excited. Dalton got boards.

It was an ice-pack game, as Noble and Gibson rolled ankles. Dalton went down for a while on Thursday with an ankle, but everyone seems to be OK.

Bryant scored 16, while McCullough. Huntley and Noble got 11 apiece.

“MaKayla took some shots today that we want her to take,” Bryant said. “If we’re playing Shelby, someone like that, we’ll need her to take those.”

Games of great magnitude are getting closer. Salisbury, 25-1 and winner of 24 straight, is seeded second. Randleman, No. 1 seed in the 2A West bracket, keeps moving forward and takes on No. 5 seed Shelby, the defending champs, on Tuesday.

Eight are left in the state in 2A. The West is down to a Final Four. Next for Salisbury will be No. 6 seed North Surry on Tuesday.

North Surry’s Greyhounds beat No. 3 Newton-Conover 60-55 on Saturday. The team with the better seed hosts through the regional finals. Only state championship games are played now at a neutral site.

Four-year seniors McCullough and Gibson can see their time in the historic SHS gym winding down.

They are 93-10 in their careers and they have lost only three times at home. They don’t intend to lose the last one.