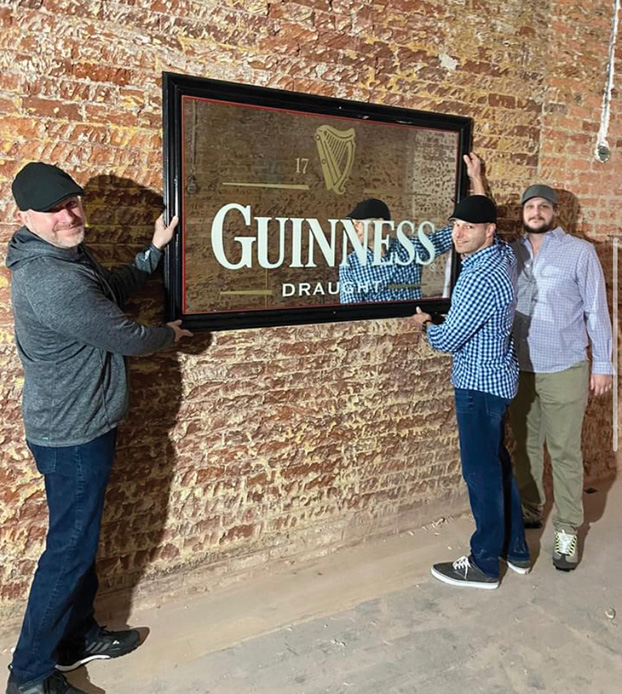 Brian Schmidt (left), Justin Lawrence and Jordan Young hoist a Guiness sign up on the wall of what will be Gaelic Alley. The trio is opening the Irish pub at 114 S. Main St. in Kannapolis. Photo submitted.

KANNAPOLIS — During two recent trips to Ireland, Brian Schmidt sampled some of the best pubs the Emerald Isle has to offer.

He enjoyed glasses of Guinness at “Disneyland for beer drinkers” and had a few pints at Dublin staples like The Temple Bar and The Brazen Head — both bars that have been open for well over a century. Schmidt might not have known it at the time, but he was actually conducting research.

Schmidt is now tapping into his experiences in Ireland’s most notable pubs to recreate the feeling in downtown Kannapolis. With partners Justin Lawrence and Jordan Young, Schmidt is working to open Gaelic Alley Irish Pub at 114 S. Main St.

“We want to try to replicate the feel as much as we can to make a place you want to come and hangout,” Schmidt said “Not stuffy or pretentious or anything like that, just a fun place to go.”

Aside from his interest in good spirits and beer, Schmidt is a relative newcomer to the bar scene. He’s a surgeon in Concord and has been living in Cabarrus County for almost two decades, a transplant originally from Ohio. Lawrence and Young, however, are more familiar with the hospitality industry. The duo owns Cypress Drinkery in Charlotte. They also install sound systems and games in bars and breweries throughout the region.

It was Lawrence, friends and neighbors with Schmidt, who approached the doctor with the idea of opening the pub. The opportunity was presented to the trio by the development group that has spearheaded downtown revitalization efforts in Kannapolis. Schmidt quickly gravitated toward the idea.

“I’ve been to Ireland twice in the past five years and really enjoyed and loved it,” Schmidt said. “Once they asked if we were interested in that concept, I jumped on that.”

The trio signed a lease for the space in October, but just got started with the renovation process in January. Since then, they’ve peeled back plaster to expose walls composed of about 20 different types of bricks dating back to the 1920s.

“We’re just going to clean it up, clear coat it and let it be what it used to be,” Schmidt said.

The space itself was originally an open alleyway, a fact reflected in the new pub’s name. The alley was walled in to make a restaurant called Tar Heel Lunch that served workers at the Kannapolis mills for a short time. A bootery took the restaurant’s spot but it closed sometime in the 1980s. 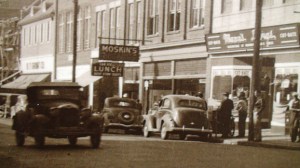 The sign for Tar Heel Lunch can be seen hanging on South Main Street in this historic photo. The closed-in alleyway is being reinvented as Gaelic Alley Irish Pub. Photo submitted.

Schmidt said the building’s storied past will be reflected on the walls of the pub. The plan is to crowd the pub with signs, posters and memorabilia in accordance with the decorating scheme employed by traditional Irish pubs.

“We all have the same thoughts on what we want and that’s a traditional Irish pub that makes you feel like you’re in Ireland — old, lots of stuff on the walls, almost a cluttered feeling is how all of the pubs are,” Schmidt said. “Pictures everywhere, mirrors everywhere, plaques, things. It’s a very cluttered but homey feeling.”

Making the space feel cozy shouldn’t pose much of a challenge. The former alleyway is about 14 feet wide and 100 feet deep.

“The space lends itself to what we want to do,” Schmidt said.

The trio aims to maximize the space by installing a rooftop patio where patrons can take in the night air and watch fireworks from Cannon Ballers games. Customers will also be able to take their drinks to go now that Kannapolis has implemented a downtown social district, allowing open containers in certain areas near the heart of town.

Several traditional Irish drinks will always be flowing. There will be plenty of Guinness, but also lesser known Irish staples such as Smithwick’s red ale, Harp Lager and Magners hard cider. Domestic beer, wine, liquor and mixed drinks will be served as well. And the trio is having a custom cooler installed in the building’s small basement to keep all of it cold.

Gaelic Alley will first serve a limited menu with the option of adding more food options in the future.

Schmidt said the trio is pushing hard to open the restaurant in the summer, before the Cannon Baller’s 2022 season draws to a close.