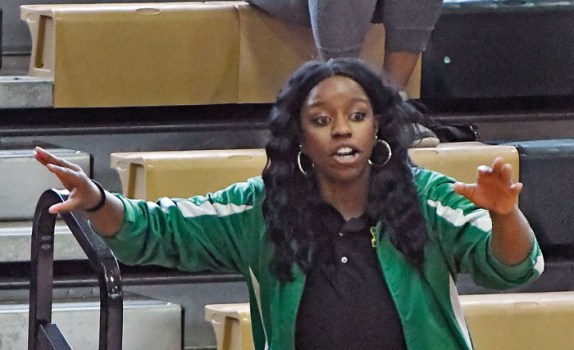 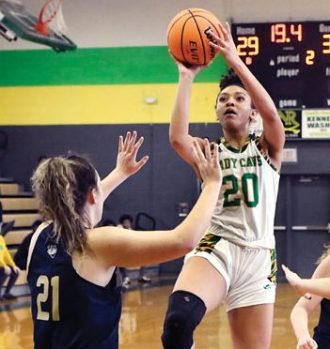 North's Hannah Wilkerson is co-player of the year for Rowan County. File photo by Wayne Hinshaw, for the Salisbury Post 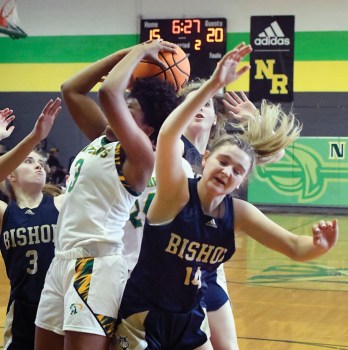 North's Brittany Ellis 3 rebounding in a crowd and BM's Kiersten Varner 14 and Charley Chappell 3 . photo by Wayne Hinshaw, for the Salisbury Post 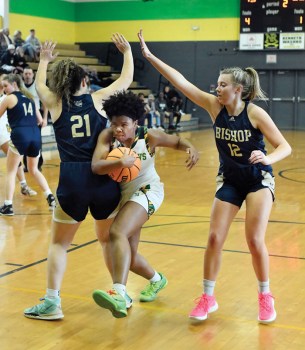 SPENCER — North Rowan and its Seven-Strong girls basketball team have run out of tomorrows.

The Lady Cavaliers excused themselves from the postseason table Saturday afternoon, when visiting Bishop McGuinness dealt them a season-ending, 66-47 loss in Round 3 of the 1A state playoffs.

“I can’t hang my head about this. I’m proud of these seven girls,” second-year coach Anthia Smith said after North’s milestone-filled season ended. “We always say Seven Strong for a reason.”

The fourth-seeded Cavs (20-9) attained 20 wins for the sixth time in program history, but victory No. 21 proved elusive. While searching for glitter, they lost something gold.

“We accomplished a lot,” mustered forward Hannah Wilkerson, North’s lone senior. “And made a lot of history. To do it with only seven players, you really can’t ask for more.”

North’s short bench proved significant when three starters picked up their fourth foul in the final period. By then its season was already headed for the end zone. The fifth-seeded Villains (23-6) knocked down 11 — count ’em, 11 — 3-pointers, received a school-record 33 points from freshman Adelaide Jernigan and led by as many as 25 midway through the fourth quarter. They’ll carry a six-game winning streak into Tuesday’s fourth round.

“We’re very grateful to be advancing,” said Brian Robinson, BM’s 20th-year head coach. “We’ve been fortunate to do this before, but for this group it’s all brand new. We have five freshmen on this team and no seniors.”

None was better than Jernigan, who set a tone when she threaded a 3-ball from the right side just 10 seconds into the match. She finished 12-for-18 from the field, including 8-for-14 from downtown, to break a long-standing school record.

“We gave up a lot of 3’s today,” said North sophomore Bailee Goodlett. “But we also had a lot of girls in foul trouble. It makes it hard to play aggressive defense and get up in someone’s face, which is what we do best.”

Smith knew that, which is why she switched to a box-and-1 defense against Jernigan late in the third quarter.

“I probably should have gone to that earlier,” Smith said. “I saw on film that she could shoot from anywhere on the floor. So I put a box-and-1 on her, which kept her away from the ball and forced other people to make plays.”

Other people tried, but Jernigan soldiered on. She buried a couple of splashdowns, made a steal and scored on a runaway layup to fuel a 13-3 run that put the guests up, 50-34, with 2:55 remaining in the third quarter.

“As a freshman, she plays beyond her years,” Robinson gushed. “It seems like the bigger the moment, the better she gets. That’s the mark of a great player.”

By the fourth quarter, Jernigan had 23 points, the Villains led by 13 and North’s season was on the critical list. Smith even opted to play a man-to-man defense despite all the foul trouble. But when Bishop McGuinness netted the first 12 points of the final period and took a 64-39 lead, the Cavs looked finished.

“I wish we could have won,” Goodlett said after pacing North with 18 points. “That would have been a shocker for these seven girls.”

The more you watched the Cavs this winter, the more you believed anything was possible. Goodlett finished the year north of 500 points. Three players surpassed 20 points in a Jan. 5 triumph at South Davidson — a first in school history. And Wilkerson, the sagacious floor leader who will play collegiately at Columbia International, became the third-leading scorer on North’s all-time list.

“There were a lot of positives for seven girls,” Smith surmised afterward. “We got a lot out of a little. We were 20-9 and hadn’t won 20 games in a long time. Like I said, we’re Seven-Strong for a reason.”

They are, but they’re out of tomorrows.

NOTES: North’s brightest moments came early, when Goodlett sandwiched a couple of fastbreak layups around a Brittany Ellis 3-pointer and a Wilkerson free throw, providing an 8-3 advantage in the opening two minutes. … The Cavs scored only 16 points in the second half. Wilkerson finished with 13 points and 13 rebounds while Ellis contributed 10 points and six boards. … Junior Grace Harriman yanked down nine rebounds for the Villains. Teammate Charley Chappell had eight assists.