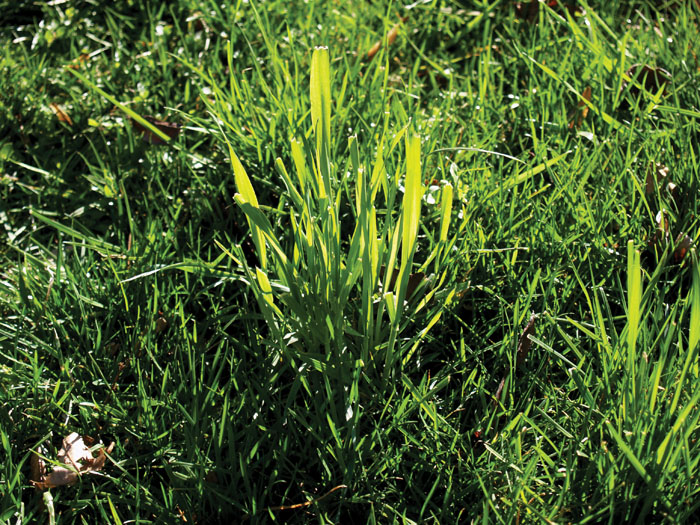 Many have a lawn question during the early spring about an over-seeded fescue lawn that has smatterings of grass that doesn’t look like a normal fescue-type grass. The newly seeded grass in question grows much faster than the majority of the newly seeded fescue turf and its color is somewhat lighter. The out-of-place grass is most likely annual ryegrass. Annual ryegrass seed infiltrates commercial seed producers’ production fields and is very difficult to control. The weed seed looks almost identical to commercial fescue seed. Most of turf-type fescue seed is produced in Oregon because of its favorable climate.

Unfortunately, annual ryegrass has infiltrated their production fields and controlling the weed during fescue seed production is almost impossible. Annual ryegrass is also included in quick-start grass seed blends because it germinates very quickly and grows aggressively. Blending annual ryegrass into turf type fescue plantings is not a good practice because of its aggressive competition for light and nutrients. Unfortunately, it’s almost certain that most commercial fescue seed blends will contain a small amount this weed. There is really no plausible control for the weedy grass once it germinates. Annual ryegrass dies in the early summer with the return of warm weather. Unfortunately, it leaves bare spots to be reseeded later in the fall.