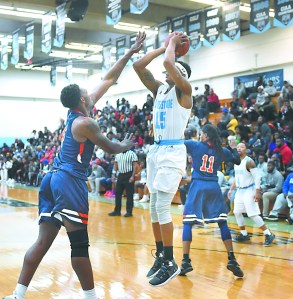 BALTIMORE – For the second consecutive season, the top-seeded Fayetteville State Broncos (20-8) will make an appearance in the  CIAA Men’s Basketball Tournament after topping No. 5 Livingstone 79-68 in one of semifinal game’s on Friday night at Royal Farms Arena.

Fayetteville State will face second-seeded Virginia Union at 4 p.m. today for the championship.

The first half started out as a back-and-forth affair before FSU’s Zion Cousins put an exclamation mark on the Broncos 9-0 run with a jumper to make it a seven-point, 11-4 lead at the 15:07 mark. The Blue Bears would then face a deficit as large as 20 points when the Broncos orchestrated a 14-6 scoring margin for over seven minutes. Livingstone scored back-to-back baskets to close the gap to 16 but a free throw shot from Koraan Clemonts made it a 39-22 advantage in favor of the Broncos at the half.

Fayetteville State went back up to 21-points to start the second half on a 6-2 run. It took the Blue Bears over 11 minutes to plow away at the Broncos lead – chopping the deficit to 10 points thanks to a jumper from Cameron Carpenter with 3:52 remaining but a bucket from Cress Worthy led to Fayetteville State owning at least an 11-point lead for the remainder the contest.

Worthy led all scorers with 22 points and eight rebounds on 8-of-16 shooting. He was named the Food Lions MVP. Clemonts followed with 17 while Darian Dixon chipped in 16 points and Cousins recorded a double-double 13 points and 10 rebounds in the winning effort.

Livingstone (15-10) was led by Deshone Hicks with 18 points, while Malik Smith added 12 points and CIAA Defensive Player of the Year Navar Elmore grabbed a team-high 10 rebounds to go along with eight points and a game-high five blocks.