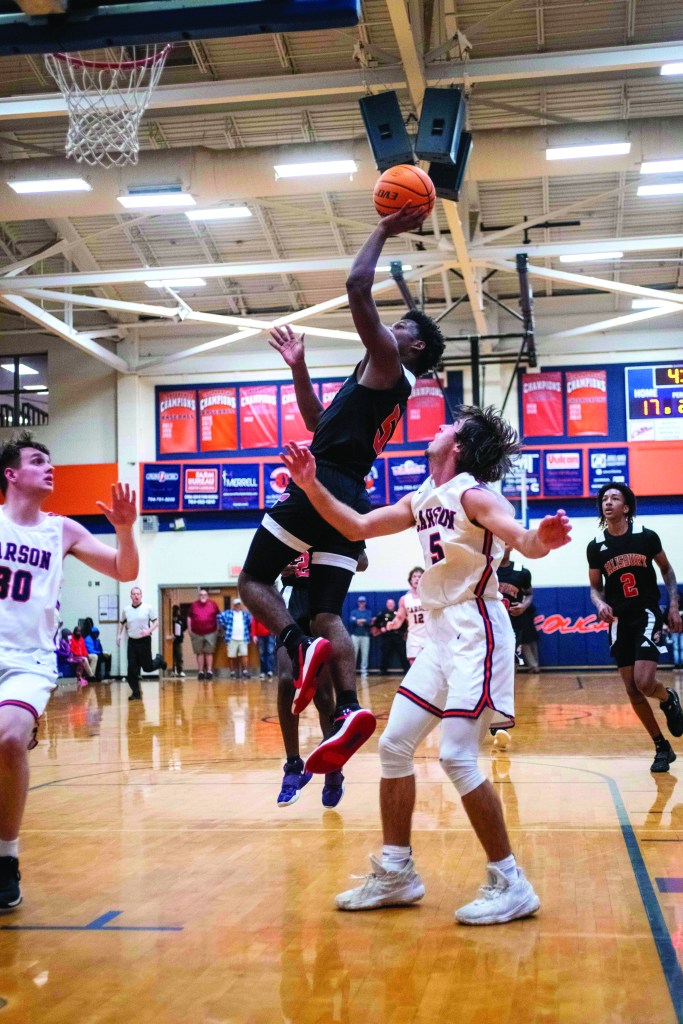 SALISBURY — Basketball is a game of runs, but this one was ridiculous.

With six minutes left to play in Thursday’s second-round 2A state playoff game in the Salisbury gym, the Hornet boys were leading 48-44 and fighting for their lives against Trinity.

With 1:30 to go,  a delirious Salisbury student section was ranting and chanting and panting for soccer star Will Webb to shed the warmups and enter a blowout game.

Salisbury head coach Bryan Withers responded to the students’ pleas and grinned as Webb immediately unleashed a finger roll Hall of Famer George Gervin would have been proud of to pour one last shaker of salt on Trinity’s many bleeding wounds.

You can’t start any worse than Salisbury started. The Hornets were down 11-3 to the 12th-seeded Bulldogs. They looked awful.

“We were just nervous,” Withers said. “But you learn your team over the course of a long season. You learn what they can and can’t do. This isn’t a team that needs me to yell and scream. This team needs me to stay calm. I knew we’d be OK.”

While fifth-seeded Salisbury (20-4) won by 24, it was a game that could have been lost.

Juke Harris and Cam Stout have been Rowan’s most prolific scorers all season, but they’re human. They were cold. Stout was 2-for-7 from 3 and needed three technical free throws to score 13. Harris shot 4-for-17. His acrobatic shots in the lane wouldn’t fall, but he did get to the foul line. He scored 20, mostly by sinking 11 of 15 free throws.

Combined, Stout and Harris shot 7-for-29. That’s 24 percent. That’s supposed to mean an awful Salisbury loss — only it didn’t. On this weird night, their three best players were freshman guard Bryce Dalton, sophomore guard Mike Geter and a non-stop hustler named Dashawn Brown. Brown is all about layups and free throws, but that’s cool. Those are high-percentage shots.

With the Hornets down 20-15 in the second quarter, Geter had seen enough.

“Mostly what I could see was that we needed to be more patient,” Geter said. “We needed to get better shots. We needed to execute on offense. We needed something to get us started.”

After Harris rebounded his own miss and fought for a stickback, the Hornets trailed 21-19. Then Geter took over the last four minutes of the first half.

A Geter steal and pass created a layup for Deuce Walker and a 21-all tie. Then Geter drove for the lead.  Then Geter made a jumper and two free throws. He carried Salisbury to halftime with a 29-27 lead. The Hornets had to feel good. They couldn’t shoot much worse — and they had the lead.

“Mike Geter’s leadership qualities came to the forefront,” Withers said. “He knew what we needed and he can do a lot of stuff.”

Trinity was led by a sophomore guard named Dominic Payne, who has Rowan connections. His mother (Mia Gibson) went to North Rowan. Payne, a tough, quick penetrator, kept his team in the game, even with the shooters Trinity places around him firing blanks.

Stout knocked down a 3-pointer late in the third quarter to get Salisbury even at 39-all. Dalton had a steal for a three-point play to close the quarter and put the Hornets up 44-39.

Early in the fourth quarter, the Bulldogs (20-6) were  far from done despite a furious Salisbury parade to the foul line. A veteran crew of officials blew a whistle every time a defender got hands on a driver. Salisbury shot a whopping 49 free throws and made 30. Trinity went 17-for-30 from the foul line.

Salisbury led 48-44 after two Bulldog free throws with 6:11 left. Geter got the ball to Brown in scoring position on two straight possessions to start the decisive run. A flurry of free throws by Harris followed, and another three-point play by Dalton stretched the lead to 59-44.

“We talked about playing with more energy,” Dalton said. “We were able to find it. We did our thing in the second half.”

When Stout stroked a 3-pointer for a 62-44 edge with 3:10 left, Trinity was reeling. Frustration boiled over into technicals. Then Stout made three of four free throws for 65-44.

“We didn’t plan to play Dalton as much as we did in the fourth quarter,” Withers said. “But the way the kid was playing, how could you take him out?”

The Hornets shot 38 percent from the field, were a dismal 3-for-18 from 3 and still won going away because they got a lot from a lot of different people.

They are finding more options. Geter had eight rebounds to go with his eight points. Brown scored 11. In 17 minutes, Dalton had nine points, three assists and two steals.

They move on to Round 3. A trip to Mount Airy to play fourth-seeded North Surry (21-4) is on the agenda for Saturday.