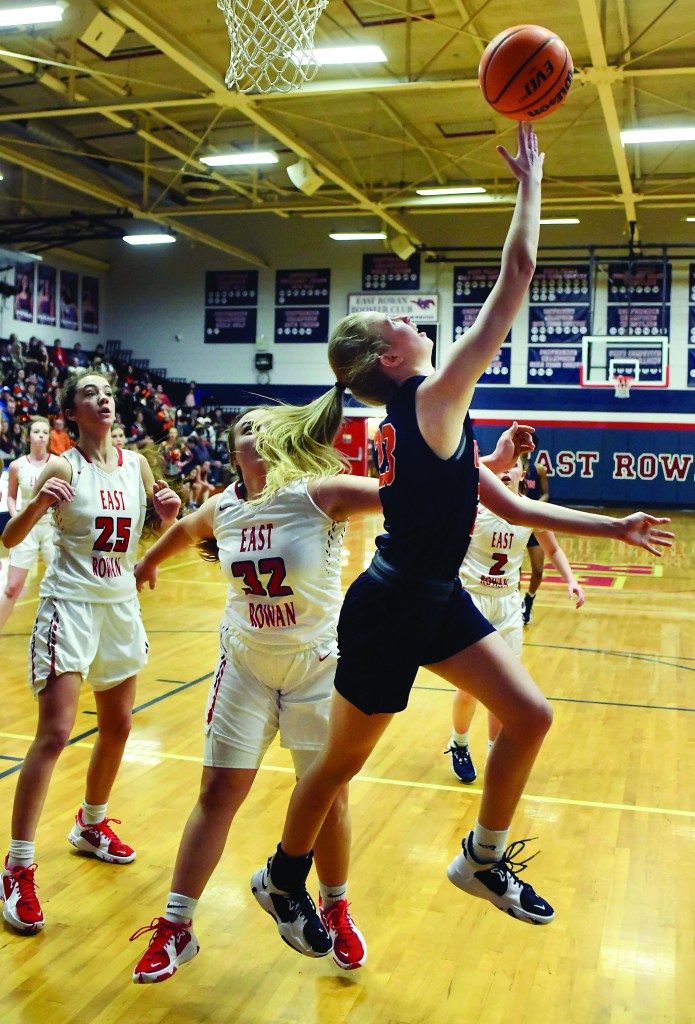 CHINA GROVE — Opponents are swarming Carson senior Mary Spry, the 6-foot Catawba signee, as soon as she touches the ball.

That’s a problem, an obstacle, but it’s also an opportunity for Spry’s teammates. Hannah Isley came through with 25 humongous points in Thursday’s 56-48 win against Pisgah in the second round of the 3A state playoffs.

Isley is a very good player, but that’s almost double what the senior, who is still undecided on a college, averages.

‘Hannah runs the floor hard every time and her teammates did a good job of finding her,” Carson head coach Brooke Stouder said. “She knocked down two 3-pointers and scored on offensive rebounds. Huge game for her when we really needed it.”

Top-seeded Carson continues to struggle to put four good quarter together and continues not to earn many style points from the judges.

On the other hand, the Cougars (24-3) always seem to do enough to come out on top.

Stouder famously began her coaching career at Carson with a 4-67 record. Now her game log reads 259-161. In other words, even with that deep hole at the outset, her teams now have won nearly 100 more than they’ve lost.

Seeded 17th, Pisgah had to ride 150 miles and Carson had the home floor and the crowd. Still, the Cougars endured a shaky offensive start.

“We didn’t have a good first quarter,” Stouder said. “So many little shots around the basket were missed. Nothing fell for us.”

Carson’s defense is the backbone of the program and kept the Cougars in the game. They’ve been playing mostly 2-3 zone lately, but Pisgah has enough shooters that they mixed some man-to-man with the zone.

“Had not shot well at all and had not rebounded well, either, but only down one,” Stouder said. “We felt pretty good.”

Carson inched back in front 34-33 after three quarters.

The Cougars played their best ball in the fourth quarter, which is always nice. They scored 22 points in the last eight minutes and won by eight.

“We had a nice fourth quarter, finished very well,” Stouder said. “That strong quarter gave us what I thought was a really good win. We beat a good team that was hard to prepare for. They’ve got four girls who score around 10 points per game, so it’s not like we could focus on only one or two.”

Isley had eight rebounds to go along with that bushel of points. Spry managed 10 points and seven rebounds.

Makayla Johnson was big again. She was 6-for-9 on free throws, made a 3-pointer and scored 11. She’s averaged 9.6 points in the Cougars’ last seven games.

“She does a good job of catching the ball, shot-faking, and then going up strong,” Stouder said. “She’s been getting to the foul line.”

Pisgah beat Kings Mountain, a conference co-champion, in the first round, so Carson survived a good, well-balanced team.

The Cougars play on. Ninth-seeded Ashbrook is next on Saturday in China Grove. The most likely starting time is 6 p.m.

The Green Wave from Gastonia has a spectacular player in guard Kennette Bess. The 5-foot 6 junior, who already has committed to Catawba, averages 23 points per game.

“We’ll be in for a battle,” Stouder said.