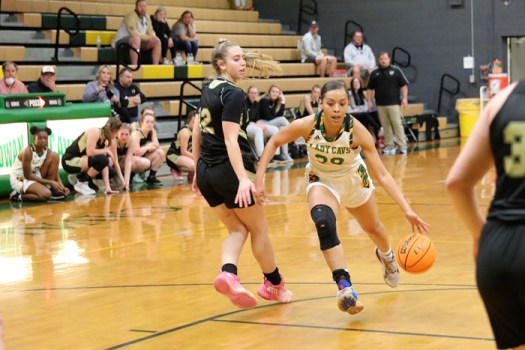 Hannah Wilkerson led the way with 23 points as the Cavaliers advanced to play again today. Photo by Jacqui Smith Watson/For the SALISBURY POST 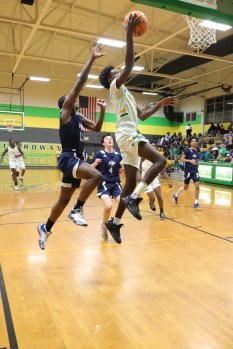 North’s Darrell Carpenter heads to the hoop in the victory over Queen’s Grant. Photo by Jacqui Smith Watson/For the SALISBURY POST

SALISBURY — Six Rowan basketball teams made it through the first round of the state playoffs, with several mind-boggling blowouts.

We shouldn’t see anything that crazily one-sided in tonight’s second round. The third round comes Saturday.

It was nearly seven winners out of eight entries for Rowan teams on Tuesday, but West Rowan’s boys lost in overtime at East Lincoln. South Rowan’s girls fought hard, but the Raiders also put away the uniforms.

Davie’s boys ended their season on the road in overtime.

Central Cabarrus’ boys, who have a chance to go the distance in 3A, broke 100 in a routine, first-round beatdown.

Tonight’s only Rowan doubleheader will be at Salisbury where the Hornets girls will take on Community School of Davidson and the Hornet boys will tangle with Trinity.

Both North Rowan teams play tonight. Both are expected to be in for battles. The Cavalier boys go to Uwharrie Charter. The North girls are home against Robbinsville, another mountain team, but a substantially stronger one than first-round foe Hayesville.

West Rowan’s girls will be underdogs at East Lincoln.

Carson’s girls will be favored at home against Pisgah.

Hannah Isley had 17 points and eight rebounds to lead the top-seeded Carson girls (23-3) in the first round.

Winners of 14 in a row, Carson’s defending 3A champs take on No. 17 seed Pisgah.

Pisgah, which tied for first place in its conference with Franklin, won at Kings Mountain on Tuesday in the 16 vs. 17 game.

Pisgah is in the town of Canton, a bit further west than Asheville, about 148 miles from China Grove.

Pisgah is not easy to prepare for. The Black Bears (19-6) score 59 points per game, but it’s really split up.

Seeded 13th, the Black Knights cruised 60-17 in the first round, while fourth-seeded North was romping 59-14. Hannah Wilkerson and Bailee Goodlett combined for 40 points.

Half of Robbinsville’s six losses were to Murphy, the defending 1A champs. All three games were tight.

Robbinsville also lost a close one against North Buncombe, the No. 2 seed in the 3A West bracket.

The Robbinsville girls will have a 225-mile trip, which has to benefit the Cavaliers.

East Lincoln (27-1) has won 16 in a row since losing to Cox Mill in a Christmas tournament.

East Lincoln whipped West Henderson 59-38 in the first round, while West Rowan was beating Ledford 50-40 behind a combined 37 points by Lauren Arnold and Emma Clarke.

Madison Self, a 5-foot-11 junior, averages a double-double for East Lincoln’s Mustangs and had 11 and 10 on Tuesday.

Second-round opponent Community School of Davidson is from the city of Davidson, not the county that borders Rowan.

The 15th-seeded Spartans (16-7) beat East Burke 64-52 in the first round, while the Hornets were annihilating Surry Central 59-18. Kyla Bryant and MaKayla Noble scored 14 each.

Mariana Soares averages 13.8 for the Spartans, while Ruthie Camp gets 10.8 per game,  The Spartans have been making a lot of 3-pointers.

They are familiar with one another, as they were Yadkin Valley Conference foes before the realignment that kicked in at the start of this school year.

Uwharrie Charter beat Albemarle 63-51 in the first round, while North topped Queen’s Grant 72-54, with Darell Carpenter scoring a career-best 17 and Derrick Hanson adding 15.

Like North Rowan, Uwharrie Charter placed third in a split 1A/2A league, but Uwharrie finished the highest of the 1A teams in its league and got a better seed than the Cavaliers.

Uwharrie Charter has a lot of size and features 6-foot-7 junior Ashton Troutman.

Troutman scored 26 when the Eagles beat Salisbury early this season.

Troutman got 27 against Albemarle on Tuesday. Jordan Harrison and Dawson Dunn also scored in double figures for UCA.

Moffitt, a sophomore shooter, had a 35-point game this season.