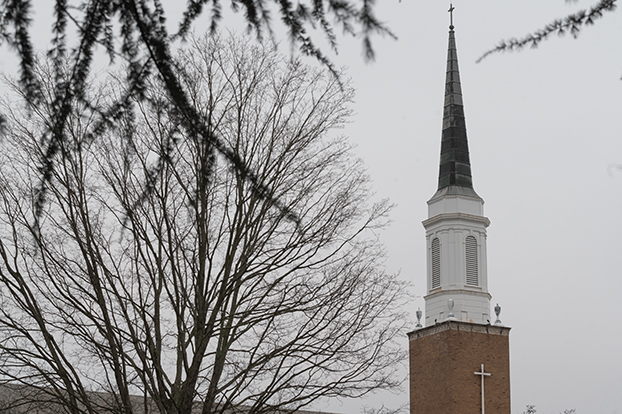 SALISBURY — The privilege of living in America allows people to insulate themselves from suffering elsewhere, but people of faith should be aware of and sensitive to torment faced by others in the world, says the Rev. Mark Conforti, senior pastor at First United Methodist Church in Salisbury.

Conforti’s church is part of a group in a downtown Salisbury planning to toll their bells for 10 minutes at 11 a.m. Friday to bring awareness to an ongoing Russian military invasion of the European country Ukraine. The churches also have organized a public community prayer vigil Monday at 6 p.m. at Bell Tower Green in downtown Salisbury. Anyone interested in attending is welcome.

The Associated Press reported Russia launched a full-scale invasion of Ukraine on Thursday, including airstrikes, tanks and ground troops. The United States and other western nations have responded with increasingly severe sanctions on Russia, its economy and oligarchs. U.S. and NATO countries mobilized troops around Ukraine, but haven’t pledged to move military personnel into the country.

The invasion sparked a discussion among downtown Salisbury pastors about how they can help.

“Several of the downtown churches have bells, which are traditionally a way to call the community to get their attention,” Conforti said.

The bells on Friday will call those within earshot to pray for those suffering in Ukraine.

“Prayer has a way of impacting the person who is actually praying, but it’s not just about us and our comfort in this part of the world,” Conforti said. “We are part of a big world … As people of faith, we need to be made aware and sensitive of people who are suffering.”

During the prayer vigil on Monday, attendees are asked to bring candles and a “heart for peace.” Prayer creates opportunities for prayer to flourish in new ways, said the Rev. Robert Black, the rector of St. Luke’s Episcopal Church.

“War is not a ‘Russian problem’ or a ‘Ukrainian problem,’ it is a human problem and we seek to name war as the sinful atrocity that it is and to also convey hope and comfort to all victims of war and violence,” Black said. “Jesus also teaches us to love our enemies, and so we pray for people on all sides of this conflict, that we may never accept violence as normal and that we all strive for the peace of God which passes all understanding.”

St. John’s Lutheran Church, which will participate in the bell tolling, offered a prayer for Ukraine Thursday on its Facebook page: “Today, we pray for courageous leaders and bold peacekeepers, that God’s reign of justice, mercy and love, will burst through this darkness and bring light to all. Soften hearts, dear God, that your kingdom will come. Amen.”