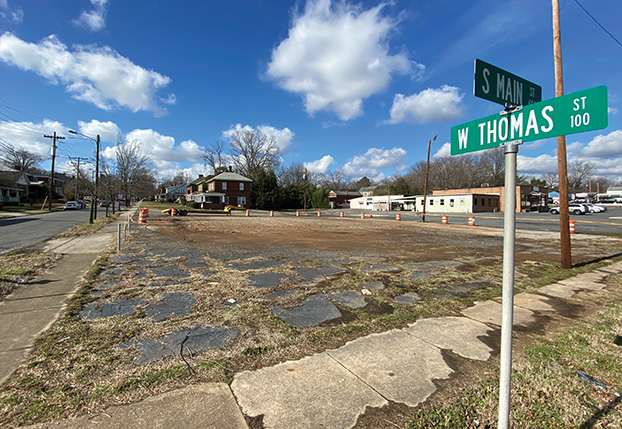 An empty lot is what's left of the McCanless-Spangler-Lanier Rental House that formerly stood at the corner of South Main and West Thomas streets. Ben Stansell/Salisbury Post

SALISBURY — An empty graveled lot surrounded by orange construction cones and caution tape is all that remains of the McCanless-Spangler-Lanier Rental House.

The two-story pink stucco building at 630 S. Main St. was leveled earlier this month. The expansive home was built in 1919 by Walter F. McCanless, the son of prosperous local businessman Napoleon Bonaparte McCanless, whose house still stands on the opposite side of South Main Street. The Bonaparte McCanless house is currently being converted into a wedding and events venue.

The McCanless-Spangler-Lanier house was sold to J.M. Glover in the 1930s, who then sold it to L.S. Spangler in 1946. Spangler’s widow Bessie sold the home to Bruce Lanier in 1960. Lanier eventually converted the building to apartments, altering much of the interior in the process. Noted in the building’s nomination form for listing on the National Register of Historic Places was the structure’s “interesting visual appearance” created by “lattice mullioned upper sash windows” and red ceramic tiled roof.

The less than half-acre property at 630 S. Main St. was purchased by Gastonia-based Royal Homes Construction and Development Company in 2008. The home itself had been vacant for almost a decade, during which it fell into disrepair.

Hesam NekooAsl, president of Royal Homes Construction and Development, said the company decided to demolish the building because it would have been too costly to repair. He also said he was worried about the home being a potential safety hazard and drawing code enforcement violations.

“I hated to do it, but it was too far gone,” NekooAsl said.

Although the house is listed in the National Register, it is not within a local historic district. Therefore, the owners did not need an approved certificate of appropriateness from the Historic Preservation Commission, according to Salisbury Planner Emily Vanek.

A 90-day notice of demolition was provided to the Historical Preservation Commission to allow time for public notice. Nothing happened in that time frame to alter the home’s fate.

Before the demolition process started, the Salisbury Fire Department held a training exercise at the home. The exercise allowed firefighters to practice forcible entry, ventilation drills and other life saving techniques on an actual structure. It isn’t uncommon for departments to train in buildings destined for demolition.

NekooAsl said future plans for the property haven’t been determined. He’s not actively marketing the property for sale.