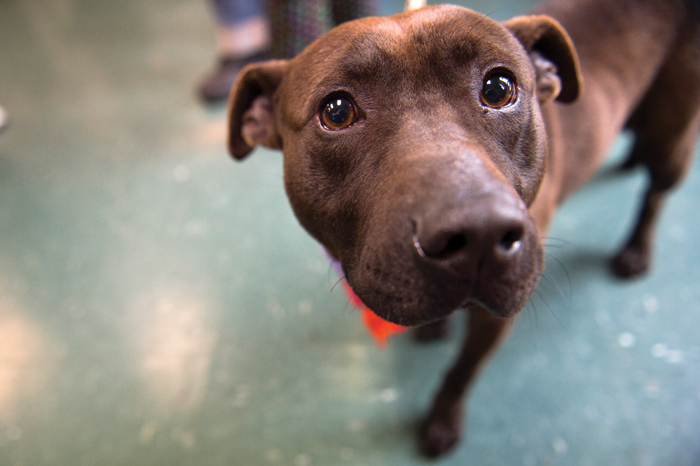 Rolo, a pit mix, stands in the lobby during the Bring Me Home Carolinas Adoption event at the Rowan County Animal Shelter on April 7, 2018. (Photo by Rebecca Benson)

SALISBURY — In an ideal world, every dog and cat adopted from the Rowan County Animal Shelter would be spayed and neutered.

Lately, it hasn’t been an ideal world.

The Rowan County Animal Shelter spayed and neutered about 80% of its animals in November. Since then, that number has declined to less than 10%. The steep decrease is a result of understaffing, COVID-19 complications and holiday interruptions, according to Animal Shelter Supervisor Maria Pannell.

Having a dog or cat fixed is beneficial for a number of reasons. For an individual animal, it can prevent disease and improve overall behavior. For the greater good, the routine procedure can help fight overpopulation, which leads to an influx of animals entering the shelter, straining already limited resources.

The Rowan County Animal Shelter aims to surgically sterilize as many of its animals as possible, but that’s often easier said than done. The shelter’s on-site veterinarian typically has his or her hands full completing intake exams and providing general care for all of the animals. At least one of the shelter’s two veterinary assistants are needed for the procedures as well. The part-time veterinary assistant position has been vacant for several months.

“Anytime we’re short of a whole position, we have to focus on the main priority, which is making sure animals are healthy first and foremost,” Pannell said.

Scheduling spay/neuter procedures has also been a challenge in the past several months due to staff members missing time because of COVID-19, Pannell said.

“COVID protocols play a big part in it,” Pannell said. “Just not knowing when you’re going to have staff from day-to-day is a challenge.”

Pannell said she is optimistic the shelter will improve its sterilization rate in the near future, which will be important as kitten season approaches.

The Rowan County Animal Shelter is not required to spay and neuter animals before releasing them. Pendergrass said very few shelters in North Carolina have resources to fix all animals adopted.

The shelter, however, requires adopters to sign a waiver agreeing to have the animal fixed. To help offset the cost of the procedure, the shelter provides a $70 voucher that can be used at a local veterinary office or clinic. Pannell said the vouchers are accepted by every vet within Rowan County. If an adopter takes their animal to a vet outside of the county, the animal shelter will reimburse the vet up to $70 for the procedure.

Spay/neuter prices vary based on a number of factors, including gender and weight. Having a male cat neutered is often the cheapest procedure and typically costs less than $100. Having a large female dog spayed is the most expensive, usually costing well over $100.

Pannell said ensuring each owner follows through with getting their new pet fixed is difficult because the shelter typically releases several thousand dogs and cats each year. Pendergrass said the shelter currently has room for cats, but not much available space for dogs.

Local resources are available for new pet owners who have adopted an unfixed animal from the shelter. Most local veterinarians offer spay and neuter services, sometimes at a discounted price. Lazy 5 Vets is offering 20% off procedures in February.

The Cabarrus Spay Neuter Clinic also offers low-cost surgical sterilization, according to its website. The Rowan Neuter Scooter transports animals at least once a month to the Charlotte Humane Society for sterilization procedures. The Rowan Humane Society facilities sterilizations at local reduced cost clinics. Appointments can be made by calling 704-636-5700 and leaving a message.

The Rowan County Animal Shelter is holding a special 80% adoption event Thursday and Friday from 11 a.m. to 4 p.m. Unaltered animals will be $16 and altered will be $3. Both dogs and cats will be available for adoption. The shelter is located at 1465 Julian Road in Salisbury.